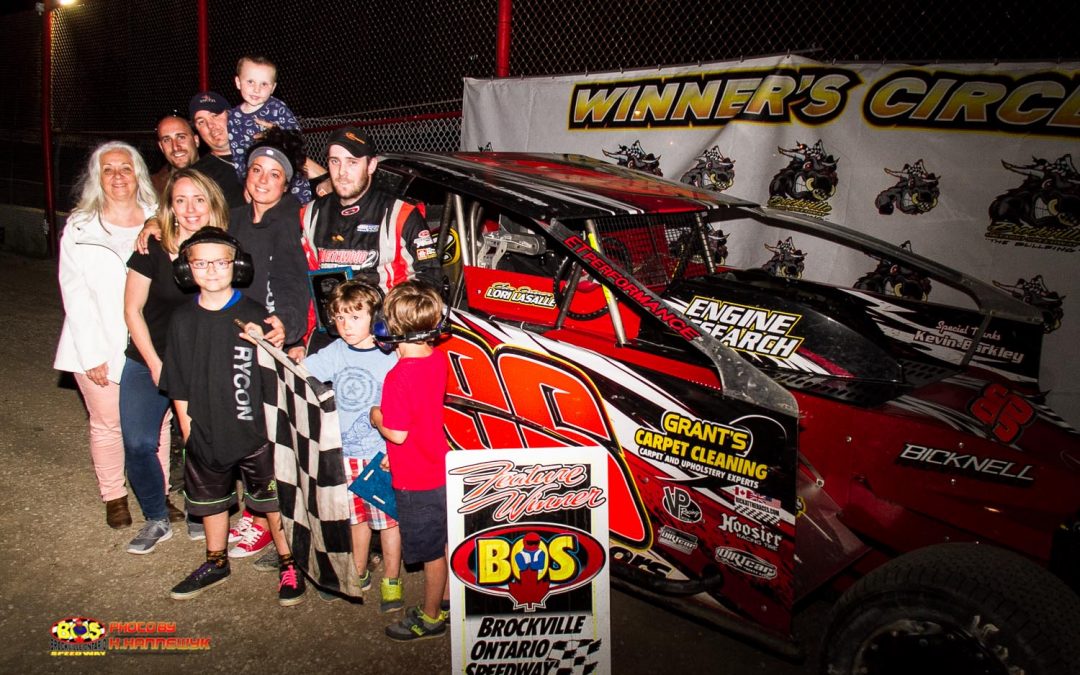 BROCKVILLE, ON – Rycon Electric was on hand as 6 big classes of racing were set to go racing. After Mother Nature claimed the win 1 week ago all drivers were up on the wheel and ready to race.

Earlier in the night a special 8 car dash took place in support of the family of long time race fan Jess Denna who passed away unexpectedly in March. Long time friend and Central New York Sportsman driver Michelle Courcy paced the field carrying her best friend’s favorite number 5 on the side of her car for the parade lap. Chris Herbison took home the win in the 8 lap contest with Luke Whitteker and Luke Stewart completing the top 3.

The 358 Modified 30 lap feature went green and Andy Lloyd jumped to the top spot over Aaron Pugh, Jeremy LaSalle, Adam Turner and Luke Stewart. The caution came out before the completion of lap 1 as Chris Raabe, Danny O’Brien and Luke Whitteker spun in turn 3. All eyes were on those 3 drivers as they charged from the back of the field. On the restart Aaron Pugh drove by Andy Lloyd for the lead and proceeded to put on a dominant display of driving talent. Behind the leader Jeremy LaSalle was going to work as he got by Andy Lloyd for 2nd with Tim O’Brien and Corey Wheeler completing the top 5. By halfway Pugh had opened up a straightaway advantage but Jeremy LaSalle was slowly chipping away at the deficit as Wheeler, Tim O’Brien and Modified Rookie Steve Barber tried to keep pace. As fast as Aaron Pugh was it looked like he was well on his way to his first ever win and the only thing stopping him was a caution. On lap 20 that’s exactly what happened as Steve Bilow spun collecting Ryan Poole and several others. When the green flew Pugh stayed committed to the bottom as LaSalle made his way to the top lane while Wheeler and Chris Raabe had a spirited battle for 3rd with Barber still continuing to run 5th. LaSalle had a fast car and let Aaron Pugh know he was there over the remaining laps. Coming to the line with 2 to go Jeremy LaSalle charged by on the top side off turn 4 for the lead. After 3 years of trying Jeremy LaSalle finally got the job done collecting his first ever 358 Modified victory. Aaron Pugh finished a hard fought 2nd with Corey Wheeler 3rd, Chris Raabe rebounded from early race problems for 4th and Chris Herbison got by Steve Barber to complete the top 5.

In Sportsman action Jamie Young who was making his return to the Sportsman ranks in 2018 with a brand new car, took the lead right away but the race went under red just as quick as Dale Gifford pounded an infield tire off turn 4 collecting Ryan Scott in the process. Gifford had to be helped from the car but did walk to the ambulance and would be ok. When the green flew it was Young taking the lead once again over Alex Gagnon, Jesse Hudson, Tyler Reynolds and Joey Paquette. As the race went on and the laps clicked off Jamie Young was basically on auto pilot as he drove away from a quality field but Shane Pecore and Johnathon Ferguson was making a charge to the front quickly. Ferguson would be the first driver to make his way forward as he took over 2nd on lap 12. At the halfway point Ferguson then ran down Jamie Young for the lead and would take over the top spot a lap later while Pecore was making his way to 3rd and was putting pressure on Young for 2nd. On lap 21 a possible top 5 finish for Jamie Young went away as he slipped off turn 2 losing several spots. On lap 22 the break Shane Pecore needed came at the expense of Alex Gagnon who saw his best ever finish slip away with a blown motor. On the restart Pecore went right to work on the outside taking the lead from Ferguson who tried his best to get the spot back. With 1 lap left JJ Courcy, was on the move from 24th spot got hooked together with another car in turn 3 bringing out the final yellow. The Central New York invader would cross 13th on the night. On the final restart Pecore was able to get away cleanly and march on to his first win of the year at Brockville. Ferguson kept his great season going with another 2nd place effort. Jesse Hudson, Tristan Draper and Tyler Reynolds completed the top 5.

In Street Stock action The action was fast and furious as Steve Brady took the lead early but it didn’t take long for defending track champion Tyler Bushey to get the top spot away as he took the lead on lap 3. Bushey would have some company towards the mid stages of the race as Michael Dillon would mount a challenge. After a quick yellow for a spun Travis Neuman, the green flag flew again on lap 6 an Dillon took the lead away over Bushey and Brady. But the defending champ got up on the wheel and made his way back around Dillon on lap 9 and was looking to run away. Over the final laps Michael Dillon did all he could to get by the Tyler Bushey was not to be denied on the night, scoring win number 1 of the year. Dillon finished a hard fought 2nd over Steve Brady, opening day winner Sheldon Hoogwerf and Todd Raabe.

Rookie Sportsman were set for 15 laps and it started off on a wild note as 2 karting graduates Xavier Perrin and Gavin Riddell had a spirited battle for the race lead in the opening laps. On lap 4 Riddell got by Perrin off turn 2 but both drivers hooked bumpers sending both of them off the back stretch with Perrin nearly flipping over. Both were able to continue. On the restart veteran Brock Cullen was making his debut in the Rookie sportsman class as he took control of the event. At the halfway point Cullen held a comfortable advantage with Jonah Lewis, Gavin Riddell, Xavier Perrin and Melissa Gifford. Over the final laps Brock Cullen made it look easy as he has now won in 3 different divisions at the speedway claiming his first ever Rookie Sportsman checkered flag. Jonah Lewis overcame handling issues all night for 2nd while Gavin Riddell rebounded for a 3rd place finish.

The Mini Stock event started off with 2 early caution flags for Mark Packer and Dominick Merkley as they both had issues in the early going. Once the laps clicked off Tyler Hazelaar was the race leader over Brandon Henderson and Jared Galway. Hazelaar had his car on cruise control and was looking like he may claim his first ever Mini Stock win. On lap 8 things changed as coming off turn 4 Hazelaar made contact with another car and spun and slammed into an infield tire. The race was red flagged but in typical race car driver fashion Hazelaar shook off the accident and re-fired the car and joined at the tail of the field. This left Brandon Henderson in control and was looking to win his first ever race after many years of trying. Over the final laps Dominick Merkley was making a big charge to the front but the red would come back out on lap 13 for Shawn Willigar as he crashed hard in turn 2. Willigar would climb out of the car without injury. On the final restart Dominick Merkley was looking to win back to back but Brandon Henderson was in control and never looked back scoring his first even Mini Stock victory at Brockville. Merkley held on for 2nd over Tyson Slinger, Smantha Henderson and Jared Galway.

The 12 lap vintage feature saw plenty of attrition but also saw a great lead battle. Josh Powers led early on but Kenny Polite was making his return to racing after a year off and was pressuring Powers the entire race. On lap 9 the final yellow flew as Pat Charland spun in turn 3. On the final restart Kenny Polite made a big run at the leader but Josh Powers had the hot set up and cruised to his 2nd win in 7 days having won a Vintage feature on Monday night in Cornwall. Polite held on for 2nd as Pat Charland rebounded for 3rd.

The Outlaw Vintage have next week off but all 5 regular divisions will be back on the card for a full program. Racing action begins at 7pm. 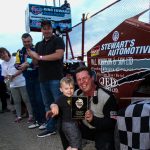 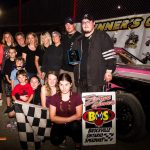 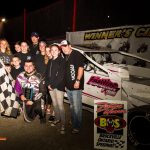 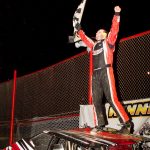 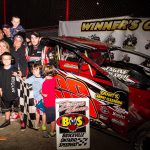 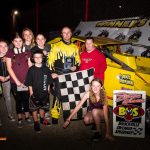 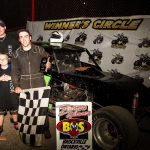 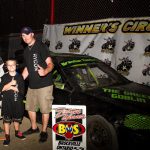