Banks Back In Victory Lane At Brockville 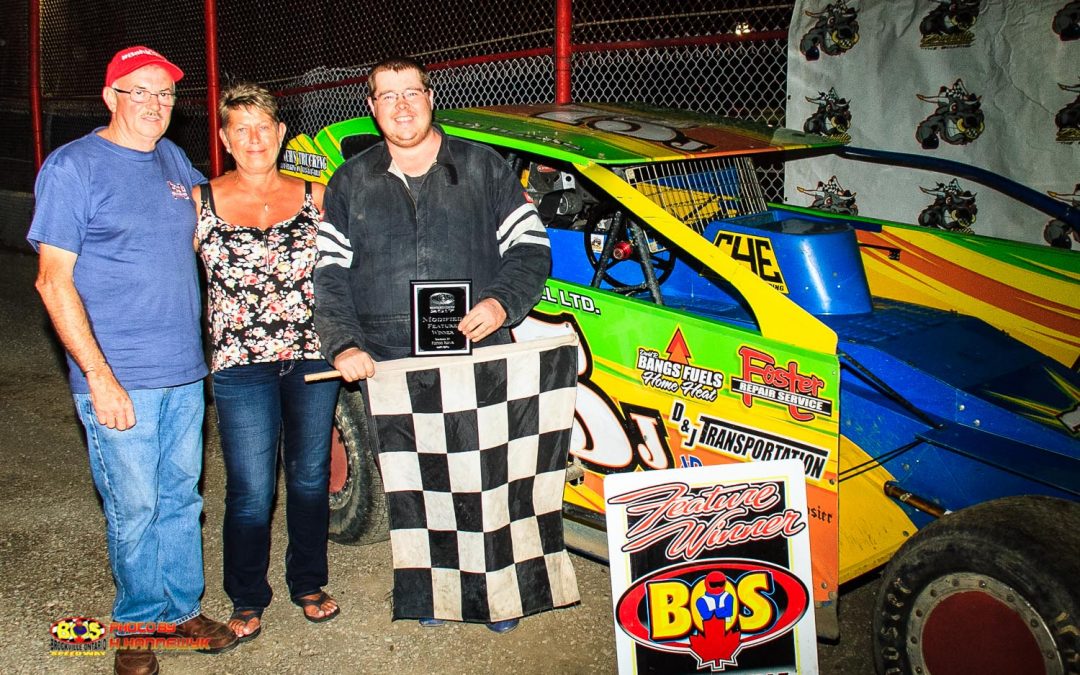 Joe Banks started on the pole for the 30 lap 358 Modified feature and was making it look easy as he led the way early on with Jeremy LaSalle, Ryan Poole, Madison Mulder and Tim O’Brien giving chase. With a fast race track and a big cushion on the top side of the race track everyone was flying around the speedway which was perfect for Banks as he never left the top side all night making it tough for LaSalle and Poole to get by early on. At the halfway point Banks still held a slight lead but Jeremy LaSalle was all over the leader waiting for any mistake as Poole Mulder and O’Brien remained in the top 5. On lap 19 the caution flew for Steve Bilow as he slid off the track in turn 3. On he restart title contenders Kyle Dingwall and Bobby Herrington started to battle hard as Herrington and Dingwall exchanged paint and grooves in the remaining laps. The 2 drivers would come together in turn 2 causing a broken rear end on Herrington’s machine sending him pit side. When the green flew it was still Banks in front over LaSalle, Madison Mulder, Ryan Poole and Kyle Dingwall now 5th. As the laps clicked off Kyle Dingwall was making a late race charge as he got by Mulder for 3rd but had some work to do to catch the leaders. Over the final laps Joe Banks would have the car to beat as he marched on unchallenged to claim his 2nd 358 Modified win of the season at Brockville. LaSalle would cross in 2nd over Dingwall, Madison Mulder and Luke Whitteker.

Xavier Andrews would lead a stout field of Sportsman cars in the opening stages of the 25 lap feature event with Jarrett Herbison, Jon Mills, Ryan Scott and Dylan Evoy completing the top 5 early on. On lap 4 Ryan Scott made contact with the front stretch wall causing a right rear flat tire, he would go pit side and return at the tail of the field. When the green flew Andrews continued to lead but Dylan Evoy and Johnathon Ferguson were on the charge and looking to take command. On lap 8 Evoy did just that as he slipped by on the bottom of the speedway to take the top spot bringing Ferguson to 2nd and the battle was on between these 2 drivers. Over the next 6 laps Evoy and Ferguson put on a driving clinic as they drove away from the field leaving Jon Mills, Jarrett Herbison and Tristan Draper to battle for a top 5 position. On lap 15 Chris Ferguson would come to a stop in turn 3 bringing out the yellow. When the green flew it was Evoy and Ferguson in the top 2 spots but Evoy had the quicker car and was able to pull away. Dylan Evoy appeared to have the race well in hand but Ferguson began to pick up the pace as he closed in for the top spot with 3 to go. At the white flag Ferguson made a move on the top lane heading into turn 2 as Evoy was trying to find his way by lapped traffic. Heading into turn 3 Evoy made slight contact with the traffic allowing Ferguson to charge to the top side. As they leaders raced off turn 4 it was Johnathon Ferguson by a half car length at the line for win number 3 of the year over Dylan Evoy, Jon Mills, Jarrett Herbison and Jesse Hudson. Who came from 11th to finish 5th at the checkers.

Alex Gagnon was the dominant force in Rookie Sportsman on this night which saw several early race cautions to begin. Dave McDonald led early but Gagnon quickly took the top spot on lap 6 and would pull away leaving McDonald, Dale Gifford and Thomas Jock III battling for position. Over the final laps nobody had anything for Alex Gagnon as he ran away from the field to score his 3rd rookie Sportsman feature in a row over “TJ3” Thomas Jock III who made a big move on the final lap to take 2nd while Dale Gifford came home 3rd.

The street stock division was all Sheldon Hoogwerf as he was looking to claim his first win of the year after destroying his car nearly a month ago. As Hoogwerf led the way Keith Riddell and Todd Raabe were in a battle for 2nd as Raabe took over the position on lap 8 and began to run down the leader. On lap 11 Raabe made a move for the lead but Hoogwerf held on and began to pull away. At the finish Sheldon Hoogwerf would finally put the struggles behind him as he scored his first win of the season in the 15 lap event. Todd Raabe would cross in 2nd with Keith Riddell, Steve Brady and Kyle Massey rounding out the top 5.

The mini stock feature had an exciting finish as Melissa Gifford led early on over new comer Dominick Merkley, Mark Packer, Jarrod Galway and Dylan Kirkland. The race quickly became a battle between Gifford and Merkley as they pulled away from the field. Moving in and out of traffic Merkley tried several times to get by but was unable to complete the pass as Gifford held a strong lead while Dylan Kirk
And made his way to 3rd. On the final lap heading into turn 3 Gifford nearly spun allowing Merkley to slip by for the lead. In a shocking turn of events Dominic Merkley would go on to score the upset win becoming the 6th first time winner of the season. Dylan Kirkland would cross in 2nd over Jarod Galway, Tyler Hazelaar and Dave Watchorn.

Next week track titles are on the line as it’s final points in all division plus the first ever 1000 Islands RV Tri Track challenge for the 358 Modifieds showcasing feature winners from Mohawk, Brockville and Cornwall in 2017. The busy night of racing is set to go green next week at 7pm. 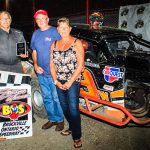 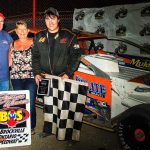 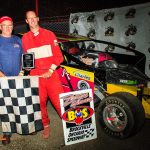 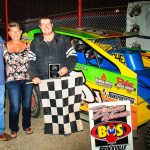 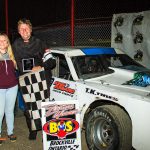 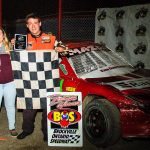