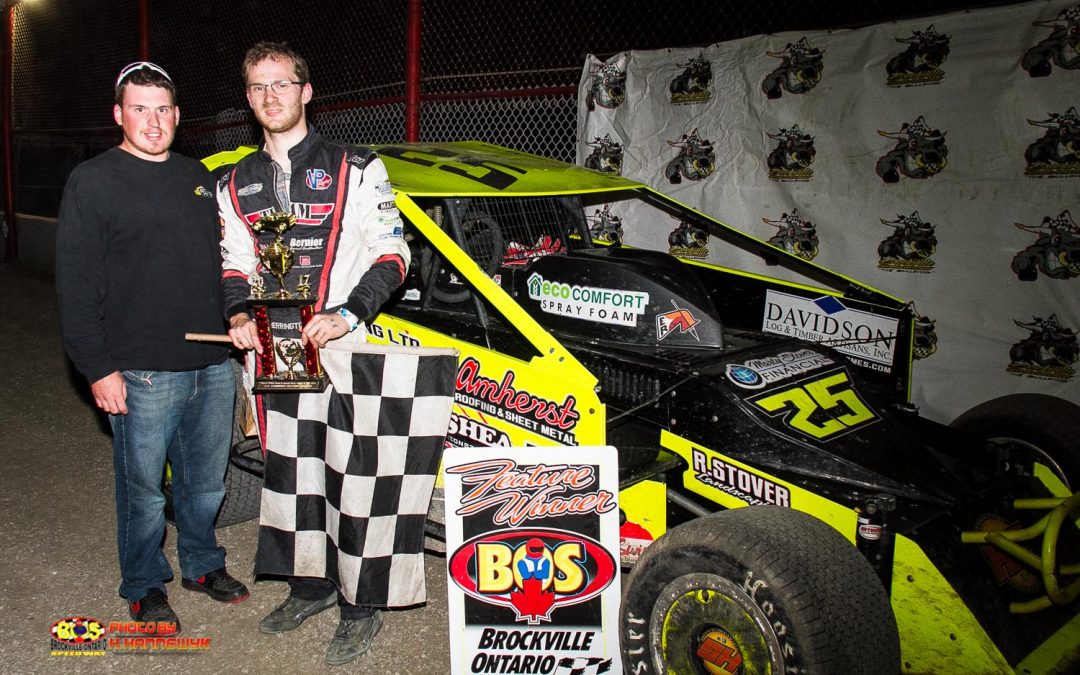 BROCKVILLE, ON – Another big night of racing this past Saturday night at the Brockville Ontario Speedway saw a thrilling finish in the 358 Modifieds. Bobby Herrington edged out Danny O’Brien by inches to claim his first 358 Modified win of the year. Dylan Evoy took the lead late to score his 3rd Sportsman checkered flag, Dale Gifford scored his 2nd Rookie Sportsman victory in 3 weeks, Kurtis Daye became the 5th different first time winner in Mini Stock and Cory Winters notched his first Outlaw Vintage victory of the year.

Madison Mulder and Tim O’Brien started on the front row for the 30 lap 358 Modified feature with O’Brien getting the lead away over Madison Mulder, Aaron Pugh, Joe Banks and Ryan Poole. After a win on June 10thO’Brien had a great race car and was looking to drive away from the field but the man on the move early on was Bobby Herrington. After starting in the 8th spot Herrington quickly worked his way to 2nd on lap 6, then took over the lead on lap 7 and began to pull away. On lap 10 the first caution flew bunching up the field for a restart which brought in some heavy hitters on the next start. When the green flew Herrington continued to lead with Tim O’Brien 2nd but Luke Whitteker and Danny O’Brien were on the charge as they moved into the top 5 for the first time on the evening. Whitteker would work his way to 2nd on lap 18 and was putting pressure on the race leader with Danny O’Brien moving to 3rd while Tim O’Brien and Aaron Pugh continued to round out the top 5. On lap 24 Tim O’Brien’s great run came to an end as he clipped an infield tire in turn 2 breaking the front end on his machine. When the green flew Herrington did all he could to protect the bottom while Whitteker was all over him for 2nd as the field headed into turn 1. Herrington appeared to have the handling slip away but remained up on the wheel and in control of the race but 3rd place Danny O’Brien was making a late charge. On lap 27 he took 2nd from Whitteker and then quickly ran down the leader setting up an exciting finish. With the white flag out Herrington continued to protect the bottom but O’Brien would make a charge to the top side as they headed into turn 3. Heading to the checkers Danny O’Brien made a cross over move to try and get by as the leaders crossed the line in a photo finish. Timing and scoring showed that by 0.006 seconds Bobby Herrington was first to the line and ending a yearlong winless drought at Brockville. O’Brien crossed in 2nd with Luke Whitteker 3rd, Kyle Dingwall made a charge from 12th starting spot to 4th while Stephane Lafrance overcame several issues to complete the top 5.

The 25 lap Sportsman feature saw Xavier Andrews lead the way early on but Jason Shipclark was on the move from his 4th starting spot in the early going. Shipclark would take the lead on lap 4 over Andrews, Dylan Evoy, Brad Winters and Tristan Draper. The yellow flew on lap 7 as points leader Ryan Scott clipped an infield tire which hurt the front end on his race car enough to force him pit side for the night. When the green flew Shipclark charged to the lead but 2 time track champion Dylan Evoy was on the move from his 6th starting spot as he took 2nd with Draper 3rd, Shane Pecore and last week’s winner Johnathon Ferguson completed the top 5. A long green flag run at the mid way point of the race allowed Dylan Evoy to search around for a different line to try and catch the leader. Evoy was making it work as he narrowed the gap between him and Shipclark to 5 car lengths with Pecore, Ferguson and Steve Barber completing the top 5. On lap 21 the final yellow flew which was a bonus for Evoy. On the restart Shipclark took the lead but Evoy shot to the top lane on the speedway and was able to take over the lead as the field headed down the back stretch. After 2 early season wins Dylan Evoy was determined on this night as he soared to his 3rd win of the season with Shane Pecore making a big move off turn 4 on the last lap for 2nd with Johnathon Ferguson and Steve Barber completing the top 5.

The Mini Stock 15 lap feature was an emotional one as Kurtis Daye took the lead from his 4th starting spot over Chris Bakker, Melissa Gifford, Marc Dagenais and Jarrod Galway. On lap 3 the caution flew for Colin Tracey as he slowed off turn 1. When the green flew Daye was still in command but Cornwall invader Marc Dagenais was on the move and looking for the lead. On lap 7 Dagenais was able to take over the top spot but appeared to slow quickly allowing Daye to regain the lead and begin to pull away from the field with Chris Bakker 2nd, Dylan Kirkland 3rd, Jarrod Galway 4th while Marc Dagenais faded to 5th. On lap 12 Dylan Kirkland’s great run came to an end as he slid off turn 2. On the final restart Kurtis Daye would jump out to the lead but Bakker was right there with him to challenge. After a near career ending concussion 2 months ago Kurtis Daye held off a determined Chris Bakker and a hard charging Dustin Bode to score an emotional first career Mini Stock victory. Chris Bakker crossed in 2nd with Dustin Bode who pitted late with tire problems, coming home 3rd while Jeff Bode and Marc Dagenais rounded out the top 5.

In Novice Sportsman Geneva Sheffield was looking to claim her first ever feature win as she lead the opening 5 laps over Dale Gifford and Alex Gagnon. On lap 6 Gifford would find his way by for the lead while Gagnon stayed in his tire track and moved into 2nd. Over the final 7 laps Gifford and Gagnon would put on a great battle for the lead which led to an exciting finish. On the final lap Gagnon tried the top side and closed in on the leader. As they worked off turn 4 heading to the checkered flag the 2 drivers hooked bumpers nearly causing Gifford and Gagnon to spin. Dale Gifford would be the first to collect it up and edge out Gagnon to score his 2nd Rookie Sportsman win in 3 weeks while Dave McDonald completed the top 3.

In Vintage action the yellow flag saw the most action during the 15 lap feature event but once things got going Matt Barbour would lead the way with Luke McKinnon and Wayne Riddell giving chase. Riddell would lose the handle on lap 6 as he spun in turn 4 going for 2nd. On the restart Barbour continued to lead but Cory Winters was on the move from his 6th starting spot. Winters would charge to 2nd on lap 9 and was putting pressure on Barbour for the lead and the battle was on. With 4 to go Winters would take control of the race and would go unchallenged to score his first Outlaw Vintage win of the year with Matt Barbour, Pete Stapper, Gavin Riddell and Wayne Mackey rounding out the top 5.

After 4 laps in the Street Stock feature the race was forced to be delayed to next week giving the division a rare double header.

Next week round 3 of the Ogilvie’s Auto and Fleet Quad Crown Series is set to take place with 50 laps for the 358 Modifieds and 40 laps for the Sportsman plus a full show in all classes. The racing action begins at 7pm. 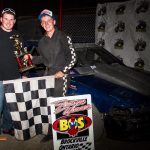 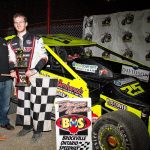 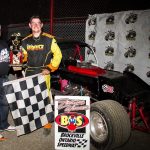 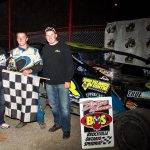 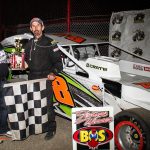