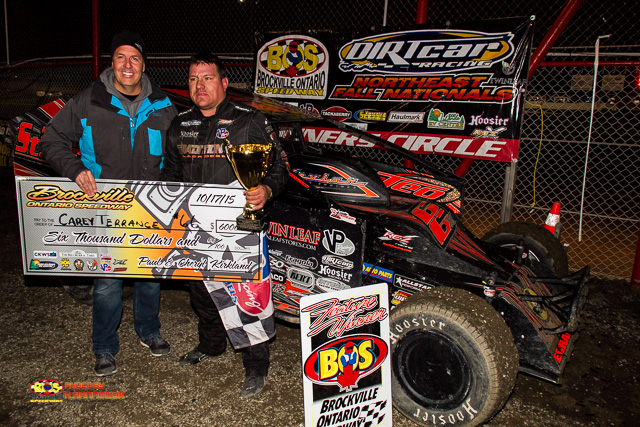 It was a chilly way to kick off the 1000 Islands RV DirtCar Northeast Fall Nationals this past Saturday night at the Brockville Ontario Speedway. With temperatures dropping into the negative region needless to say the great race fans at Brockville filled the stands and were treated to some of the best racing all season.

The Big Block Modified Super DirtCar Series was set to roll for 100 laps of racing on a super fast race track. Local favorite Jordan McCreadie and Billy Decker brought the field of 30 to the green and Decker gave it all he had to take his big block to the race lead, but it was McCreadie in a small block edging out the veteran to lead lap 1 over with Danny Johnson, Pat O’Brien and last year’s runner up Brian McDonald running 5th. McCreadie had a solid race car on this night and held off numerous challenges by Decker as Yan Bussiere slowed in turn 3 on lap 6 to birng out the first yellow of the event. When the green flew McCreadie never gave up on the outside lane as he once again pulled away from Decker who seemed to have some handling issues in the early going while Danny Johnson watched the battle from 3rd. On lap 14 Larry Wight slowed with front end problems on his Gypsum Express machine bringing out the second caution of the race. When the field went back under green McCreadie continued his strong run at the front of the field as he drove the car like he stole it on the top side of the race track with Decker, Johnson, Pat O’Brien and 12th place starter Gary Tomkins charging into 5th. Gary Tomkins has had some great run on the Super DirtCar Series but has had terrible luck, but on this night he had the pieces in place to head for victory as he quickly disposed of O’Brien for 4th and tried to run down Decker and Johnson. On lap 33 the red flag flew as Ryan Arbuthnot rolled his car in turn 4, he would climb out unhurt but the car suffered heavy damage. On the restart McCreadie’s run at the front ended as The Doctor used the low lane to take over the lead while Tomkins, Decker and Carey Terrance completed the top 5. On lap 35 Brian McDonald had problems making contact with the front stretch wall and the yellow flag came back out. When the green flew business started to pick up as Johnson continued to lead but Tomkins, Decker, Terrance and Matt Sheppard who flipped in his qualifying heat, took a backup car from 29th on the grid to complete the top 5. It was an intense battle at the front as Tomkins used a nifty move to take away the lead on the bottom with Johnson right behind him in 2nd. With this move Carey Terrance started to charge forward using the extreme outside lane to move in on the top 2 drivers. Terrance would eventually get the lead away driving by both Tomkins and Johnson while Sheppard and Chris Raabe completed the top 5. Terrance was absolutely flying around the speedway and built up a huge lead and was searching for his 2nd career series win. On lap 91 the red flew for Billy Dunn who flipped his car hard in turn 2, he would climb out under his own power but the car was finished for the night. When the final green flew Terrance flew away from the field and built up a straightaway and a half lead in the final laps as he scored his first ever win at Brockville and 2nd in the Super DirtCar Series over Tomkins, Chris Raabe blew by the Doctor Danny Johnson on the high side of turn 3 on the final lap to record a solid 3rd place finish, while Matt Sheppard charged hard all night coming home 5th.

The Sportsman Super DirtCar Series finale was ready to roll and 2015 track champion Dylan Evoy was looking to get 1 more win this season as he took the lead from the pole over Dan Ferguson, Johnathan Ferguson, Kyle Wilson and Bruno Lepage. Evoy had a solid race car in the opening laps as he drove away from a solid field leading the opening 6 laps. On lap 7 the yellow flew for Jeremy LaSalle as he hit an infield tire in turn 3. When the green flew things began to get a little interesting as Kyle Wilson and Dylan Evoy had a serious battle for the race lead while Tristan Draper, Tyler Givogue and Shane Pecore making their way to the top 5 for the first time in the event. On lap 15 Kyle Wilson was able to wrestle the lead away while Evoy tried his best to regroup and charge after Wilson one more time. Evoy would do just that as he retook the top spot on lap 18 as behind him Shane Pecore, defending series champion Mathieu Desjardins and Corey Wheeler started to move forward. Pecore would eventually get by Wilson for 2nd but had some work to do to run down the leader who had built up a full straightaway advantage. On lap 26 Tristan Draper who was running in the top 3 slowed off the top side of turn 3, and the yellow flag flew. When the green came back out Pecore did everything he could to get by Evoy but the 2015 champion stayed strong as he took over the lead. Evoy had a strong car on this night and was in charge of the field the entire night. Behind him Pecore was having a great run in 2nd but Corey Wheeler, Mathieu Desjardins and Brad Rouse were charging hard exchanging positions in the top 5. On this night however nobody was catching Evoy as he mastered traffic to perfection and went on to score his 6th win of the year at The BOS and his 2nd tour win of his career. Pecore settled for 2nd with Wheeler, Desjardins and Brad Rouse competing the top 5.

The Rookie division held the Rookiemania 40 on this night and 24 cars came to the start of the event with track regulars Joe McNichols and Quincy Roberts taking away the top 2 spots with Bob Ray, Tyler French and Jean Marc Larose completing the top 5. Roberts had a quick car at the start of the event and used a great move to get by McNichols for the race lead by lap 10 with Jean Marc Larose making his return to racing completed the top 3. Several yellow flags slowed the event through the early stages but up front Roberts was charging hard and looking to score his 2nd win of the 2015 season. By lap 20 Roberts had the field at his mercy but behind him Joe McNichols, Larose, Tyler French and Dylan Kirkland were trying to find a way to run down the leader. On lap 28 McNichols great run ended as he lost a right rear wheel in turn 2. When the green came back out Jean Marc Larose was trying his best to take the lead away from Roberts. Larose edged out in front by inches but Roberts kept up the momentum and held off the charge of the 2 time Rookie champion. On lap 33 Melissa Gifford slid off turn 2 and Barrel Rolled her car several times and the red flag flew. Gifford was shaken but walked on her own to the ambulance. When the green flew Jean Marc Larose gave it everything he had but Quincy Roberts was too strong taking the big pay day and his 2nd win of the year. Larose settled for 2nd with Tyler French crossing in 3rd.

The Vintage Modifieds were also a part of the 1000 Islands RV DirtCar Northeast Fall Nationals and Wayne Riddell would make his way to the front of the field but had some tough customers to deal with in the 15 lap affair. Sprint Car regular Paul Pekkonen was right there to challenge in the opening 7 laps with Applefest Shootout winner Brian Comeau, Steve Arbuthnot and Steve Lackie completing the top 5 spots. By lap 10 Riddell still held onto the top spot but veteran Modified driver Steve Arbuthnot was charging hard looking to take over the race lead. On lap 12 Al Harju spin his car in turn 3 bringing out the final yellow of the event. On the final restart Arbuthnot made a charge on the bottom but Riddell was too strong as he took his 2nd and final Vintage Modified win of the year. Brian Comeau made a huge move on the top side off turn 4 to take the 2nd spot over Arbuthnot with Paul Pekkonen and Ryan Comeau completing the top 5.

The 1000 Islands RV DirtCar Northeast Fall Nationals continues Sunday afternoon with the held over events from Friday which include the DirtCar 358 Modified Series, Go Nuclear Late Models and the Street Stocks. Racing begins at 1pm.