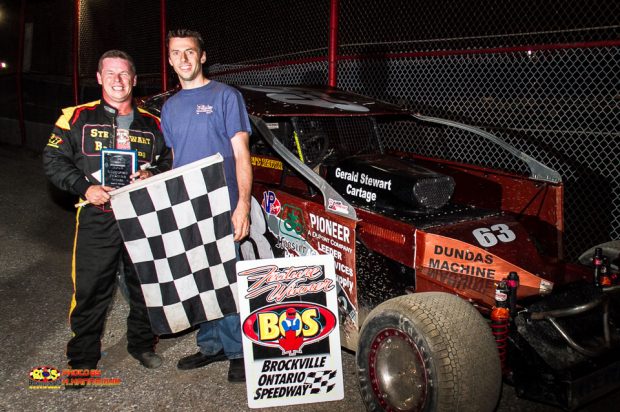 The season is beginning to draw to a close as this past Saturday night at The Bullring drivers were charging hard as points battles in all classes were on the line. With one week left in the regular season everyone was giving it everything they had and pushing their cars to the limit.

The 358 Modified feature was set for 30 laps of racing as Rookie Jeremy LaSalle and veteran John Mulder led the field to green with LaSalle taking the top spot in turn 1. LaSalle would lead the opening 4 laps as he charged away from Chris Herbison, Kyle Dingwall, Gage Morin and Matt Billings. The caution flew on lap 4 for Madison Mulder who slid off the back stretch, he was able to re-fire and join the rear of the field. On the restart LaSalle continued to run strong and was on a mission for his first ever win. Behind the top 5 Danny O’Brien had the chance to seal up his 13th track title on this night. With a 115 point lead on Jordan McCreadie, Danny was on the move from 14th as he charged to the 6th spot at the halfway point but had some work to do to catch the top 5. Meanwhile Herbison had closed in on the leader Jeremy LaSalle and the battle was on. On lap 18 Herbison used the bottom lane in turn 3 to take over the lead as LaSalle slipped back to 2nd over Kyle Dingwall Gage Morin and Bobby Herrington. As Herbison pulled away LaSalle and Dingwall were having a spirited battle for 2nd at the field came into turn 3 with 10 to go. Gage Morin made a 3 wide bid for 2nd but ran out of race track as he slid off turn 4 hitting the catch fence. He would rebound to finish 10th at the checkers. On the restart Herbison would again pull away but Danny O’Brien was on the charge once again as he took 4th from brother Pat O’Brien, and then set sail after the top 3. with 3 to go Herbison was poised to bring the Stewart Racing team their first 358 Modified win. On lap 28 that all changed as the caution flew setting up a fantastic finish. When the green flew Herbison pulled away from Dingwall by 3 car lengths But Danny O’Brien was flying on the top side taking 2nd and then charged after Herbison. On the final Danny gave it all he had but Herbison was too strong as he claimed his first 358 Modified win since 2003 at Brockville and first since Cornwall last season. Danny O’Brien came across 2nd which was more than enough to claim his 13th career track title. Dingwal would cross in 3rd while Pat O’Brien rebounded from an early spin to finish 4th with Bobby Herrington taking 5th.

In the Sportsman division Dylan Evoy was the dominant force but would have to contend with Tristan Draper early in the 25 lap feature event. Draper held the lead in the opening 7 laps as behind him Evoy, Connor Dawdy, Shane Stearns and Ryan Scott were all in a battle for position. On lap 8 Evoy found the top lane to his liking as he took over the lead leaving Draper and a host of others to battle in the top 5. With Evoy checking out on the field the race was on between Draper, Stearns and Dawdy . All 3 drivers were exchanging 2nd, 3rd and 4th several times over the remaining laps while behind those drivers the top 2 in points weren’t having the best of nights. Runner up in points Ryan Scott would spin early in the event but would rebound late in the race to finish in the 9th position. Points leader Shane Pecore was trying hard to keep a comfortable lead over Scott in the points as he stayed consistent all night long bringing the car home for a solid 7th place effort as he increased his lead in the standings. Dylan Evoy in contrast has not worried about points all year, after many ups and downs the Brockville native was back in dominant form as he drove away from a quality field on this night. Without the aid of a yellow over the final laps nobody had a chance to catch Evoy as he scored his division leading 5th win of the season over Draper who crossed in 2nd with Connor Dawdy, Shane Stearns, and Johnathon Ferguson completing the top 5.

The Street Stock 15 lap event saw Tyler Bushey lead the field to green and lead the opening 3 laps as Xavier Andrews, Kody Kelly, Michael Dillon and Nick Gauvreau would round out the top 5. Bushey was looking to hold on for his first career win in a division where his father Roger was a track champion back in 1999. Behind the leader 2 time feature winner Xavier Andrews was putting the pressure on the Ogdensburg native as the field raced into turn 3 on lap 7. At the halfway point Andrews made his move taking over the top spot with Bushey 2nd and Michael Dillon completing the top 3. On lap 8 new comer Kyle Massey spun his machine in turn 4 bringing out the yellow. Over the final laps Andrews survived a flurry of caution flags and a late race charge from 2nd place Tyler Bushey to record his 3rd win of the season over Bushey who crossed 2nd for his best career finish. Nick Gauvreau, Todd Raabe and Alex Gagnon rounded out the top 5.

The Mini Stock division saw Dylan Kirkland take over the lead at the drop of the green flag over Teddy Baird, Chris Bakker, Bob Ray and Joe McNichols. Kirkland had a fast car and was determined to get his first ever win after a pair of runner up finishes earlier this year. On lap 9 Joe McNichols would take over the lead as he was looking for his 2nd win of the year in only his 3rd start this season. As McNichols drove away Teddy Baird, Jon Gifford, Bob Ray and Dylan Kirkland were left battle in the top 5. Even with several late cautions Joe McNichols was not bothered at all as he scored his 2nd win of the year and 2nd of the weekend having won at Mohawk for the first time the previous evening. Gifford charged up to 2nd over Baird, Ray and Kirkland.

In Rookie Sportsman Jacob Clancy came into the evening as the points leader but his night would start off on a bad note as a 3 car tangle took place in turn 4 sending him pitside. Clancy would return to the field but was many laps behind the leaders. Derek Cryderman has been on a great run the last month at The Bullring as he would dominate the 15 lap event. Chris Ferguson who came into the night 2nd in the standings was looking to gain valuable points on Clancy and was on the charge looking for the leader. In the end Cryderman had the fastest car on this night as he scored his division leading 4th win of the year with Ferguson and Dan Christiensen completing the top 3.

The Outlaw Vintage Modifieds were on the card as well for their 12 lap feature go. Veteran Wayne Riddell led early on but would have to contend with a driver he has known his entire life. That being grandson Gavin Riddell, who was making a serious bid for the lead on his Grandfather through the entire event. Gavin tried several times over the remaining laps to get by but it wasn’t meant to be as Wayne Riddell collected his first Outlaw Vintage win of the year over Gavin Riddell, Jason Powers crossed 3rd while last week’s Street Stock winner Brock Cullen finished 4th, John McNamee would follow up his win a couple weeks ago, with a 5th place effort.

Next week its final points night in all classes plus the annual pit party to cap off the 2016 regular season. Racing is set to begin at 7pm.