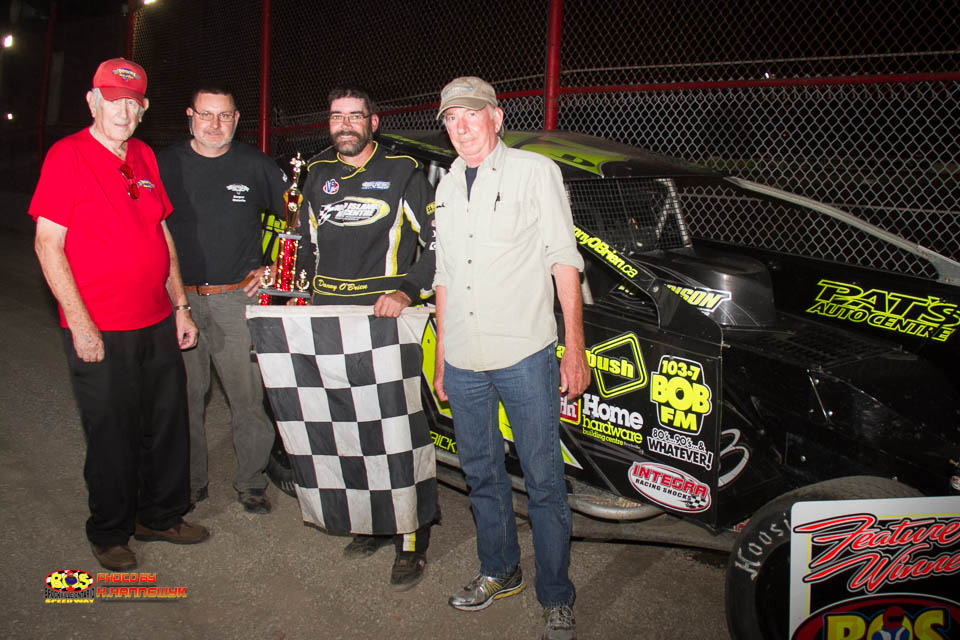 It was another great night of racing this past Saturday night at the Brockville Ontario Speedway as the 2nd round of the Ogilvie’s Auto and Fleet was set to take place. Another warm night saw changing track conditions which put the emphasis on track position.

The 358 Modifieds were set for 50 laps of racing as Pat O’Brien and Ryan Poole led the field of 26 cars to the green with O’Brien getting the jump into turn 1 over his brother Danny O’Brien, Matt Billings, Luke Whitteker and Bobby Herrington. Before the first lap was completed a 3 car tangle in turn brought out the yellow right away. When the green returned Pat O’Brien continued to lead but Danny O’Brien had a fast race car and was able to take over the top spot heading off turn 2 with Billings, Whitteker and Herrington still completing the top 5. Danny O’Brien was on cruise control in the early going as he pulled away from a quality field by a straight away as the field completed lap 10 with Matt Billings and Luke Whitteker charging to 2nd and 3rd with Pat O’Brien and Herrington still running strong in the top 5. With a long green flag run the track began to take on rubber and became very fast which made it tough to pass especially lapped cars. The race leader had his fair share of struggles in traffic as O’Brien couldn’t get by 2 lapped cars on lap 26 which allowed Billings to close in and try to take over the lead. On lap 32 the caution flag came out setting up a restart which proved to be a big break for the race leader. When the green flew Danny O’Brien drove away by 3 car lengths while Billings tried to keep pace with Pat O’Brien, Luke Whitteker and Dale Planck who came from 11th on the grid to complete the top 5. Danny O’Brien had a stout race car and was looking to become the first 2 time winner of the year as he once again pulled out to a straight away lead. On lap 41 the final yellow flew as Tommy Jock Jr. spun in turn 4. On the final restart Danny O’Brien drove away from the field in convincing fashion to score his 5th Ogilvie’s Series win and 2nd win of 2016 over Matt Billings, Pat O’Brien, Dale Planck and Luke Whitteker.

The Sportsman portion of the Ogilvie’s Triple Crown saw Ryan Scott and defending track champion Dylan Evoy lead the field to green in the 40 lap contest with Evoy taking the top spot from the bottom side with Aaron Pugh, Shane Stearns and Tristan Draper giving chase. Dylan Evoy has had a rough start to the year despite his 2 wins the year has been plagued by DNF’s and bad luck. Ryan Scott however was not making things easy as he pulled even with Evoy several times in the opening laps but the 2 time track champion stayed strong in the number 1 spot. On lap 12 Tristan Draper suddenly slowed on the track bringing out the first yellow of the race. When the green flew Evoy remained in front but the man on the move was Steve Barber. The Joyceville Ontario native started 6th and charged by Aaron Pugh for the 3rd spot, then took over 2nd at the half way point from Ryan Scott and began to run down the race leader. At halfway the yellow flerw for Nathan Berry who spun in turn 2. When the green flew Evoy still remained in front but Steve Barber was on a mission. The top 2 raced side by side for the next 5 laps until Barber used the top lane to get by on lap 27 and began to pull away. As the laps wound down Barber was inching closer to his first Ogilvie’s Series win but lapped traffic would be the deciding factor. With 5 laps to go Barber was unable to clear to lapped cars which allowed Evoy to close in and create one of the best races in recent memory. Evoy closed in on Barber on the final lap heading into turn 1 while Barber tried to find a way by the lapped cars. However Barber made one slip in turn 2 and that’s all Evoy needed to sneak by on the bottom lane and hold off all challenges from Barber to score his 3rd win of the year and 2nd in a row in the Ogilvie’s Series. Barber came home a close 2nd with Aaron Pugh, Ryan Scott and Shane Stearns completing the top 5.

In Rookie Sportsman Mike Evans was the man in charge as he took the lead from Nicole Austin at the drop of the green flag with Anthony Rassmussen charging to the 3rd spot, After several weeks of disappointment Evans had a great car and was looking for his first ever win but 14 year old Rassmussen was on his back bumper and looking for the lead. Evans was strong but he slipped wide off turn 4 with 5 to go allowing Rassmussen to close the gap. The 2 drivers made heavy contact sending Evans into the infield with a broken front end while Rassmussen escaped with minor body damage to his car. On the restart, despite the damage Anthony Rassmussen was able to hold off Jacob Clancy in the closing laps to grab his first ever Brockville win and his 2nd of the weekend having won a Novice Sportsman feature the previous night at Mohawk. Clancy came home 2nd with Tyler Parker crossing 3rd.

The Street Stock 15 lap event was ready for battle and Xavier Andrews was looking to end a streak of bad luck as he took the lead from the pole and began to pull away from a stout field. With Xavier Andrews well out in front the battle was on from 2nd on back as Xavier’s father Travis Andrews made a 3 wide pass to pick up 2nd with Kody Kelly, Tyler Bushey and Nick Gauvreau completing the top 5. As the laps clicked off Xavier Andrews was on a rail and looking to finally park his brand new car into victory lane. On lap 14 the yellow would fly for Martin Robertson who slowed in turn 1. When the green flew for the final lap Xavier held off all the challenges of his father Travis to grab his 2nd win of the year with Tyler Bushey taking 3rd, Kody Kelly and Alex Gagnon came from 9th on the grid to round out the top 5.

The Mini Stock 15 lap feature saw a scary moment at each end of the speedway in the opening lap which brought out the red flag. Heading into turn 4 Ricky McBryan lost control of his car nearly hitting the end of the wall in turn 4. His car continued around the wall through a fence separating the track from the grandstand and came to a stop. Thankfully nobody was injured and McBryan was able to refire his car, drive through the parking lot, into the pits and back on the track. While all of that was going on Richard Bartholomew went over the turn 2 banking and flipped his race car. Bartholomew climbed out of his car uninjured but his car was done for the night. When the racing finally got going Bob Ray was looking for his 3rd win in a row as he took the lead from Mike McGonegal on lap 5 bringing Chris Bakker and Teddy Baird into the top 3. Ray was looking to driver away from the field but Bakker was on the charge as well and closed in. With 4 laps to go Ray made one minor slip and Chris Bakker took full advantage as he took over the race lead. Bakker would lead the final 4 laps with no problem to grab his 2nd win in a row over Ray, Teddy Baird, Dylan Kirkland and Mike McGonegal rounded out the top 5.

Next week BOB FM and Coca Cola will be on hand for mid season championship night as the Mini Stocks will have a special 25 lap contest plus a full show in all classes and the return of the Outlaw Vintage Modifieds. Racing starts at 7pm.