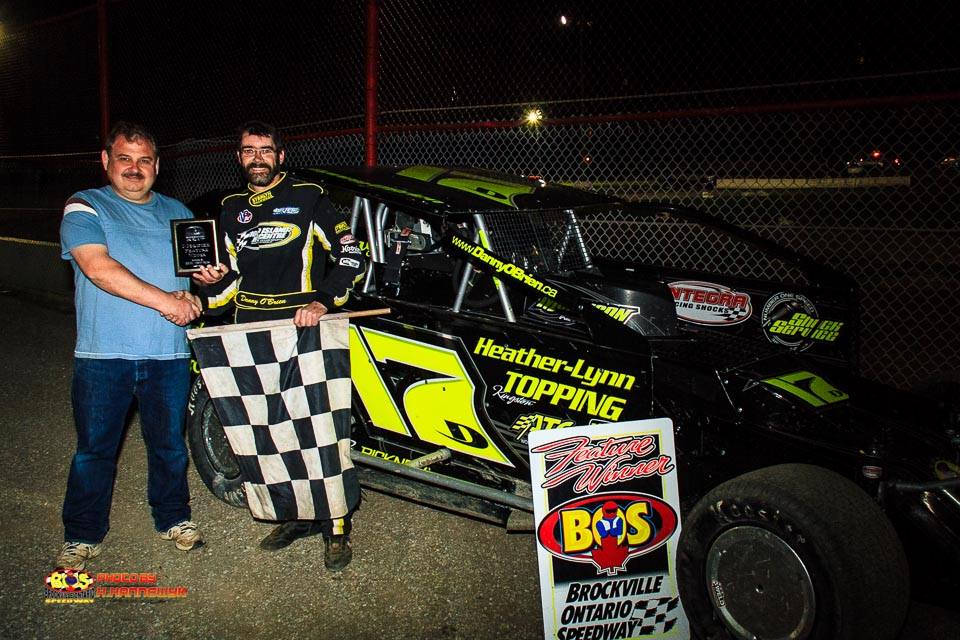 BROCKVILLE, ONT – With the season opener delayed by wet weather 1 week ago the Brockville Ontario Speedway had a packed pit area in all 6 classes and some familiar names were at the head of the field. Danny O’Brien only needed 10 minutes of his time to win the 358 Modified 30 lapper, Dylan Evoy led the final 6 laps for the Sportsman checkered flag, Xavier Andrews claimed the Rookie Sportsman feature in his debut, Wade Purchase dominated the 15 lap Street Stock feature, Brian Comeau led the last 4 laps to claim the Outlaw Vintage event and Jarrod Galloway claimed his first career Mini Stock feature win in a wild finish.

The 358 Modified division was ready to roll with Danny O’Brien and Bobby Herrington on the front row with O’Brien taking away the top spot with John Mulder, Brian McDonald and Ryan Poole completing the top 5 early on. The race track was in great shape and O’Brien was setting a torrid pace opening up a straightaway by lap 10 as behind him Herrington was all by himself in 2nd, Brian McDonald was having a great battle with John Mulder as he got by for 3rd. By lap 13 O’Brien was starting to work lapped traffic but it didn’t slow his charge as neither Herrington or McDonald could close the gap. As the laps wound down Danny O’Brien had no problems in traffic while behind him Luke Whitteker was making a late charge as he drove by McDonald for 3rd after starting in the 9th spot. In the end with no cautions Danny O’Brien had a perfect night as he dominated the 358 Modified season opener. Bobby Herrington crossed in 2nd over Luke Whitteker, Brian McDonald and John Mulder.

In the Sportsman ranks Johnathon Ferguson had all the momentum on his side after winning at Mohawk on Friday night taking the top spot from the pole over Shane Pecore, Dylan Evoy, Jason Shipclark and Tristan Draper. After the opening 3 laps the first caution flew for Chris Ferguson as he spun in turn 3. On the restart Ferguson continued his great run but Dylan Evoy was on the move as he took 2nd from Pecore and quickly close in on Ferguson for the lead. At the halfway point the bottom was the place to be and Ferguson was using it to his advantage but Evoy was trying his best to get by on the top. On lap 13 the yellow flew for Josh Kirkland who spun in turn 1. That caution produced yellow fever as 3 straight yellows came out for minor spins and all drivers were able to continue. On lap 20 Dylan Evoy was able to get by for the lead and it proved to be the pass for the money as the 2 time track champion would drive away for his first win of the season over Ferguson, Shane Pecore, Ryan Scott and Jason Shipclark.

The Street Stock division always has a competitive field and on this night it was no different. Sheldon Hoogwerf and Keith Riddell would lead the field to green with Hoogwerf getting the top spot away. On lap 3 Brighton Speedway regular Wade Purchase was able to take the top spot over Hoogwerf, Riddell, Michael Dillon and Tyler Bushey. At the halfway point Purchase was on cruise control but Michael Dillon was making his way forward and tried his best to run down the leader. With Dillon on the charge Todd Raabe also pulled into contention and were making a serious bid for the lead. But on this night Wade Purchase had it all going his way as he charged to his first ever Brockville Street Stock win. Michael Dillon would cross in 2nd with Todd Raabe, Tyler Bushey and Nick Gauvreau completing the top 5.

The Mini Stock division had an action packed 15 lap affair as rookie Jarrod Galloway and Teddy Baird led the field to green with Baird picking up the race lead. On lap 1 a scary moment saw Kurtis Daye spin in turn 1, behind him Colin Tracey had no place to go and made hard contact. The race was red flagged but all drivers were ok but the their cars were heavily damaged. When the green flew again Baird continued his great run while Dylan Kirkland, Tyson Slinger, Dustin Bode and Jarrod Galloway rounded out the top 5. Kirkland would challenge Baird for the lead and take the top spot on lap 5 starting a battle that would carry on for several laps. The top 2 drivers would race side by side over the remaining laps but the final lap was something Jarrod Galloway would not soon forget. The top 2 raced down the backstretch on the white flag lap, the 2 drivers would tangle and spin heading into turn 3 allowing Jarrod Galloway to come through for the lead. Melissa Gifford also charged through to 2nd and pulled even with the leader but Jarrod Galloway would hold Gifford off for his first career win. Melissa Gifford would cross in 2nd, her best career finish while Kirkland rebounded for 3rd. Jeff Bode and John Lemarche completed the top 5.

The Outlaw Vintage were also making their season debut and they put on a fantastic 15 lap event. Nathan Berry would take over the top spot at the start of the event over Matt Barbour, Brian Comeau, Wayne Riddell and Brock Cullen. Berry had a great race car and battled former karting regular Matt Barbour for the first half of the race but veteran Brian Comeau had other ideas. In a car he’s had success in, Comeau was on the move taking 2nd from Barbour and ran down the race leader. On lap 12 Comeau would use the bottom lane to grab the lead with Berry falling to 2nd. On the final lap Nathan Berry did all he could Brian Comeau was stout taking the season opener. Nathan Berry held on for 2nd with Brock Cullen, Matt Barbour and Wayne Riddell finishing 5th at the checkers.

Next week a huge night as the Ogilvie’s Quad Crown Series for the 358 Modified and Sportsman will be set to go plus a full show for Rookie Sportsman, Street Stock and Mini Stock. The first green flag drops at 7pm. 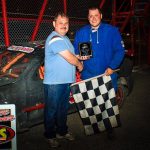 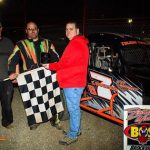 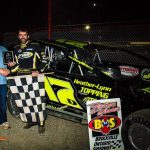 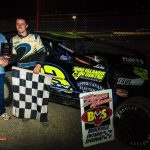 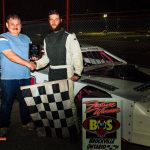