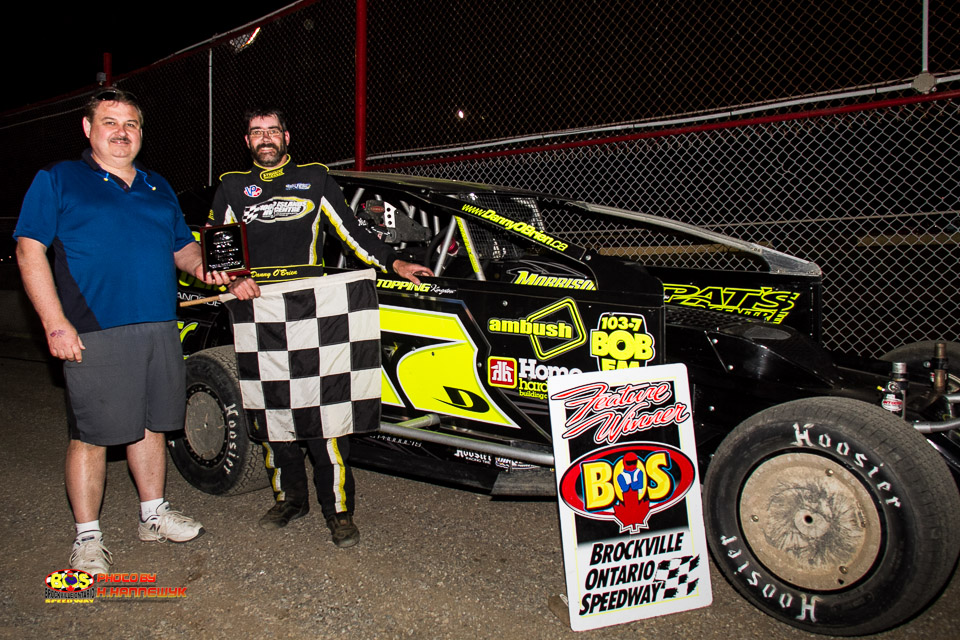 After heavy rains forced the cancellation of racing action 1 week ago, Mother Nature decided to let the top stars of the Brockville Ontario Speedway come out and have some fun as the good folks at BOB FM, Kayden Construction, Kitley Collision, Superior Cellular and Sound were on hand for the opening day action.

21 drivers were set to go for 30 laps in the 358 Modified division as Bobby Herrington and Jeremy LaSalle led the field to green with Herrington getting the top spot away in the early going over Kyle Dingwall Danny O’Brien, LaSalle and Jordan McCreadie completing the top 5 early on. Herrington had a great race car in the early stages as he pulled away to nearly a straightaway lead over the field while behind him O’Brien, Dingwall and McCreadie had a spirited battle for position. O’Brien went to his favorite lane on the high side and was able to clear Dingwall for 2nd just before halfway and charged after Herrington who was in some heavy lapped traffic. On lap 14 the yellow flew for Jason Riddell who slowed in turn 2. On the restart Herrington decided to go from the outside lane but it didn’t matter as Danny O’Brien snuck by on the inside lane to take over the lead with Herrington now 2nd, Jordan McCreadie, Jeremy LaSalle and Matt Billings now running 5th. Billings had a great race car as well coming from 10th on the grid to challenge the top 5 drivers. He got by LaSalle for 4th and quickly ran down Herrington and McCreadie for a top 3 position. While O’Brien was pulling away Billings was continuing to move forward eventually getting by Herrington for 3rd and battled McCreadie for 2nd in the closing stages. With 2 laps remaining the caution flag flew setting up a 2 lap dash to the checkered flag. On the final restart O’Brien would pull away with no issues as he quickly made claim that he wants another title by score the opening day victory over McCreadie, Billings, Herrington and Mike Adderly who made his way past Jeremy LaSalle for 5th at the checkered flag.

In Sportsman action Shane Pecore and Tabatha Murphy started on the front row with Pecore getting the edge over Murphy at the completion of lap 1 with Aaron Pugh, Ryan Scott and Steve Barber completing the top 5. Pecore had a fast race car in the opening laps and was pulling away looking for his 2nd win of the weekend having won at Mohawk on Friday night. On lap 13 the yellow flew for Mike Evans who lost the handle on his race car in turn 4. When the green flew Aaron Pugh was able to sneak by Pecore on the bottom of the speedway with Scott, Barber and Murphy still holding the number 5 position. Pugh had a great car and was beginning to put some distance between himself and Pecore as the laps wound down. As the laps wound down the man on the move was Connor Dawdy charging from his 10th starting spot. Dawdy had a great race car and would find his way past Tabatha Murphy for 5th with 6 to go as the top 4 drivers raced in heavy traffic. On lap 24 Pugh seemed headed for victory with no problems but the caution flew setting up a 1 lap dash to the checkered flag. When the green flew Pecore went right to work as he tried at will to take over the lead. Pugh kept to his strategy using the bottom lane as Pecore made one last charge on the top side of turn 4 but it was not to be, as Aaron Pugh won for the the first time on opening day and his 4th career Sportsman victory overall. Pecore settled for 2nd with Ryan Scott, Steve Barber and Jason Shipclark who charged from 15th starting spot to finish in the number 5 spot.

In Rookie Sportsman former Street Stock campaigner Derek Cryderman had a great race car as he took the lead from the outside pole over long time karting regulars Jarrett Herbison and Jacob Clancy. Cryderman and Herbison were having a great battle for the lead in the opening 7 laps racing side by side to the halfway point. On lap 8 Herbison had the handling set just right as he drove by Cryderman for the top spot and began to pull away. Herbison did have some lapped cars to deal with which allowed Cryderman to close in but it didn’t matter as Herbison was too strong on this night, as he drove away to score his first ever Sportsman victory. Cryderman ran a great race but settled for 2nd with Jacob Clancy, Chris Ferguson and Suzi Roy crossing in 5th at the line.

23 Street Stocks were set to go for 15 laps with former pavement racer Keith Riddell taking the early lead over outside pole sitter Michael Dillon. Riddell would lead the opening 3 laps before Dillon powered back around to take over the top spot with Nick Gauvreau, Brandon Gregory and Brock Cullen rounding out the top 5. On lap 7 Sheldon Hoogwerf made heavy contact with an infield tire in turn 4 causing major damage to his race car. Hoogwerf was ok but the car was done for the night. On the restart Dillon continued his strong run in the lead but Brandon Gregory was slowly working his way forward. He got by Nick Gauvreau with 5 laps to go and was charging after Dillon for the race lead as the laps wound down. with 4 to go Gregory made the move for the top spot as he got by Michael Dillon and seemed headed for the big win. The yellow flew on lap 14 setting another 1 lap dash to the checkered flag. On the final restart Brandon Gregory did everything perfect as he held off Rookie Michael Dillon and veteran Travis Andrews to score his first ever Brockville Street Stock win with Alex Gagnon and Jonathan Gallipeau crossing 4th and 5th.

The Mini Stocks saw a fleury of yellow flags to open up the first 5 laps of their 15 lap contest. Veteran Bob Ray led the opening laps before former Mini Stock champion Quincy Roberts was able to take over the top spot on lap 7 and the yellow flew once again. When the green flew defending Mini Stock champion Jamie Truelove and Dylan Kirkland were all on the move looking to take over the race lead. Despite several late race cautions and late restart Quincy Roberts stayed strong up front and drove away to capture yet another win in the Mini Stock division. Truelove came home 2nd with Kirklnad, Ray and Jorden Healy crossing 5th.

The Outlaw Vintage division saw former Street Stock champion Pete Stapper take over the lead at the drop of the green flag and lead all 12 laps to score his first win of the season with Josh Powers and Ryan Comeau rounding out the top 3 postions.

Next week the first round of the Ogilvie’s Auto and Fleet Triple Crown Series for the 358 Modifieds and Sportsman will headline the night along with a full show for Rookie Sportsman, Street Stock and Mini Stocks. The green flag drops at 7pm.