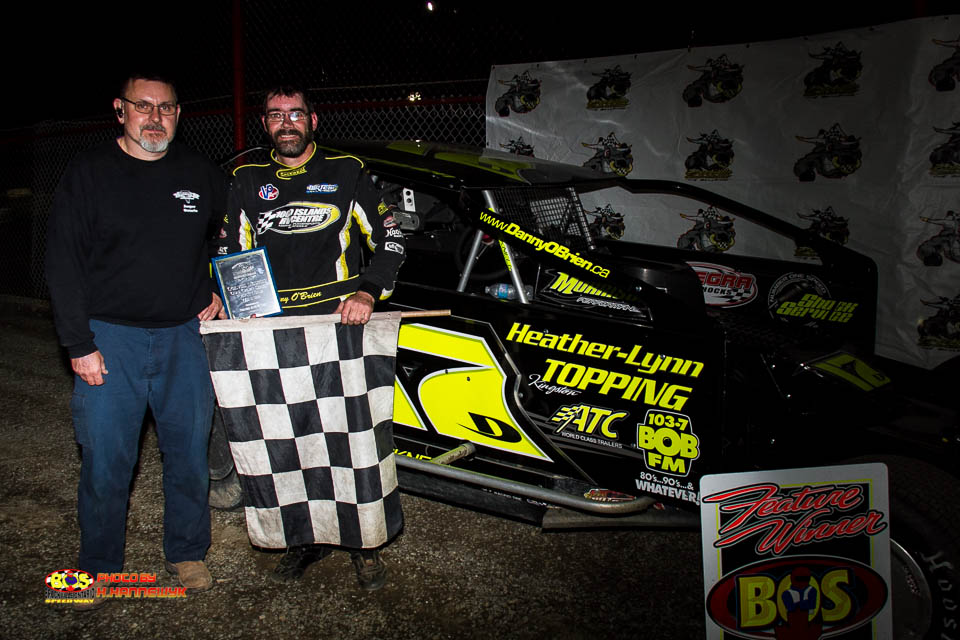 The action this past Saturday night at the Brockville Ontario Speedway was exciting as ever as familiar faces and a first tie winner all graced victory lane. Danny O’Brien kept his dominance going with his 2nd straight 358 Modified victory of the year in the Ogilvie’s Auto and Fleet Quad Crown 358 Modfied Series, Johnathon Ferguson claimed his first ever Ogilvie’s Quad Crown Sportsman Series victory, Xavier Andrews was dominant run in Rookie Sportsman, Wade Purchase only needed to lead the last 100 feet to repeat in the Street Stocks and Dustin Bode became the 2nd first tie winner in the Mini Stocks.

The Ogilvie’s 358 Modified Quad Crown Series was set for 50 exciting laps and Ryan Arbuthnot wasted no time jumping to the head of the class over Chris Herbison, Danny O’Brien, Luke Whitteker and Bobby Herrington. The drivers in this event immediately found out that top lane was fast and Arbuthnot kept his machine there in the opening laps as Danny O’Brien made his charge to 2nd and was looking for the leader. On lap 10 Arbuthnot continued his great run but O’Brien was not letting him go away and continued to hound the race leader. On lap 21 The first caution flew for Madison Mulder as he slowed off turn 2. The next 3 restarts Danny O’Brien did all he could to grab the lead but Arbuthnot had the top lane working and as able to sneak buy. On lap 24 another caution flew for Tim O’Brien who sowed down the back stretch while running 6th. When the green flew Danny O’Brien finally made the pass work taking over the top spot and started to put on a dominant performance. With 15 to go O’Brien had over a straightaway lead while behind him Arbuthnot, Bobby Herrigton and Luke Whitteker were all in a great battle for a top 5 spot. Each driver would trade positions using great 2 and 3 wide passes as they put on a great battle. In the end, nobody had anything for the 13 time track champion as he marched to his 2nd straight win over Ryan Arbuthnot, Luke Whitteker, Bobby Herrington and Kyle Dingwall who came from 10th to complete the top 5.

The Sportsman portion of the Ogilvie’s Quad Crown Series was set for 40 fast laps and Ryan Scott made some noise in the early going by taking the lead away fro Pole sitter Johnathon Ferguson, Shane Pecore, Steve Barber, and Dylan Evoy. After a solid 2016 season that saw him go winless, Scott was up on the wheel and charging hard but Ferguson had a fast car and was on the back bumper of the leader. On lap 14 the first yellow flew for Jarrett Herbison who spun his car between turns 1 and 2. On the restart Ferguson was able to muscle by for the top spot with Ryan Scott Relegated to 2nd, Shane Pecore, Dylan Evoy and Steve Barber completed the top 5. Ferguson has had a fantastic start to the 2017 season, after a win at Mohawk 2 weeks ago he was making a statement that he will be one to watch as he drove away from the field. Behind him Steve Barber and Dylan Evoy were in a battle for the 4th spot racing side by side for nearly 20 laps before Evoy was able to take control of the position. On lap 27 Josh Kirkland would slow with a flat tire on the front stretch and the caution would wave. When the green flew Ferguson continued his great run with Scott still 2nd and Dylan Evoy was on the move as he took over 3rd fro Shane Pecore and Tristan Draper who made his way fro 19th on the grid to complete the top 5. Over the final laps Johnathon Ferguson was in a class of his own as he would drive o to his first win of the year and his first Ogilvie’s Quad Crown Sportsman Series victory. Ryan Scott came home 2nd over Evoy, defending track champion Shane Pecore and the “Highside Hustler” Tristan Draper would round out the top 5.

The Rookie Sportsman was set for their 15 lap contest and the story of the year in 2017 has been Xavier Andrews. After a dominant win in the season opener Andrews would once again have another solid run as he took over the lead just before the halfway point. Behind him Francis Blanchette and reigning Street Stock champion Alex Gagnon would stage an incredible battle for 2nd while Andrews was driving away from the field. On lap 14 Kelvin Lalonde made hard contact with a turn 4 tire bringing out the only caution on the night. When the green flew Andrews stayed strong at the front of the field and would survive the late restart for his 2ndstraight feature win. Francis Blanchette would hold on to 2nd with Alex Gagnon finishing a hard fought 3rd at the checkers.

In Street Stock Wade Purchase was back and looking for his 2nd straight win but he had his work cut out for him as he would start from the 11th spot. Sheldon Hoogwerf had a great starting spot as he took the lead after the top 10 drivers were 3 and yes even 4 wide at times battling for spots but all drivers remained in control but the show had just begun. On lap 7 Ryan Brown would bring out the first yellow as he slowed on the front stretch. When the green flew Todd Raabe would take over the lead with Hoogwerf now 2nd, Wade Purchase had made his way to 3rd while Nick Gauvreau and Justin Ramsey would complete the top 5. In the closing laps Raabe looked like he was on his way to the win but Purchase was making a late charge taking 2nd from Hoogwerf and would run down the race leader. On lap 14 the yellow flew setting up a 1 lap dash to the checkers. When the green flew Raabe dove to the bottom leaving the top side wide open for Purchase. The top 2 would race door to door on the final lap but coming off turn 4 Wade Purchase made the winning pace as he soared by Raabe for his 2nd straight win of the year. Raabe would come home a close 2nd with Hoogwerf crossing 3rd, Nick Gauvreau and Tyler Bushey would compete the top 5.

In Mini Stock Chris Bakker was looking for better things to happen as he took the lead from the outside pole and would lead the opening 5 laps over Dustin Bode, Teddy Baird, Dylan Kirkland and Tyler French. Bakker had a great race car and looked like he would finally break into victory lane. On lap 9 that all changed as he broke while leading in turn 2, handing the lead to Dustin Bode. When the green flew Bode would drive away while Teddy Baird, Dylan Kirkland, Jarrod Galloway and Melissa Gifford would pull up into contention in the closing stages. A late race caution would be the deciding factor and Dustin Bode was put to the test. When the green flew Bode would get a great restart and would not be denied as he put it all together for his first career Mini Stock victory. Dylan Krikland would take home another runner up finish whiel last week’s winner Jarrod Galloway would cross in 3rd with Melissa Gifford and Karl Potvin completing the top 5.

Next week Rycon Electric will be on had for a full program of racing inn all 5 classes with the Outlaw Vintage joining the card for the 2nd time this season. The action kicks off at 7pm. 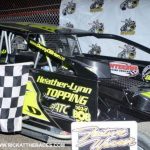 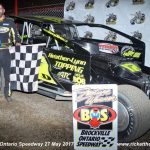 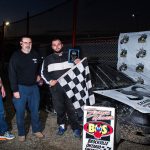 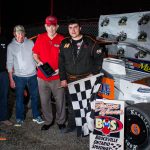 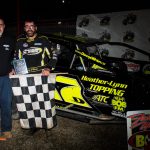 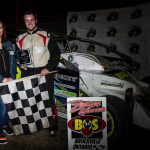 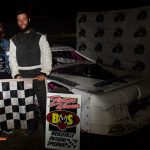