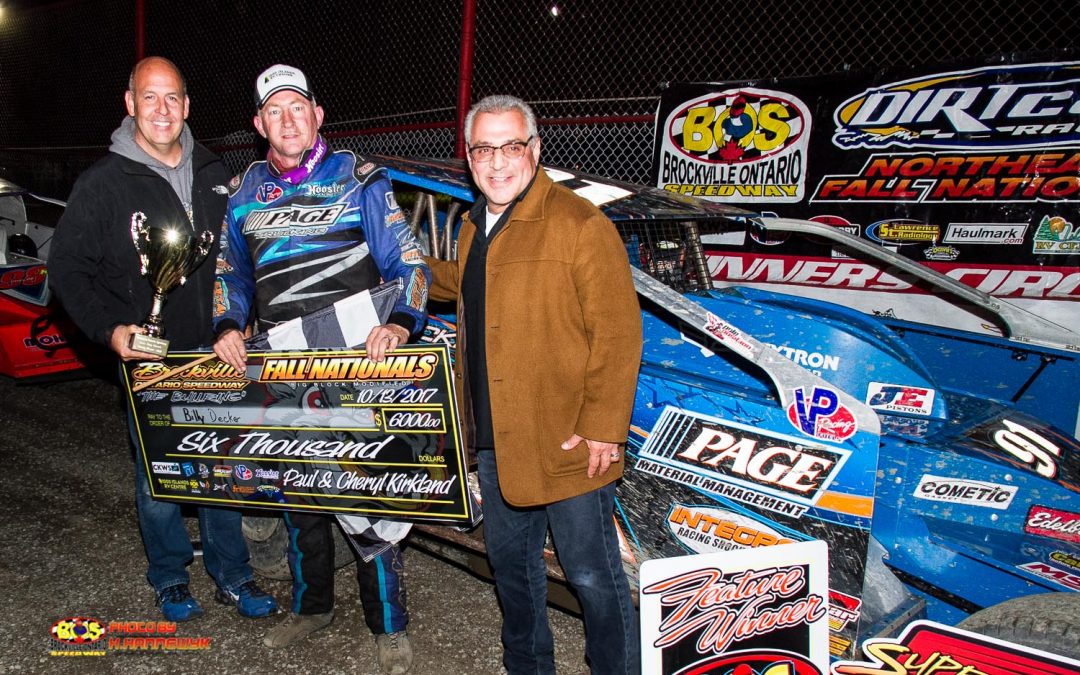 BROCKVILLE, ONT – Another picture perfect night at the Brockville Ontario Speedway as night number 1 of the 1000 Islands RV Fall Nationals took center stage. Billy Decker was flawless on this night as he outlasted Jimmy Phelps and points leader Matt Sheppard to claim win number 4 on the Super DirtCar Series, Dylan Evoy dominated the field for his 3rd career DirtCar Sportsman Series win, Guy Viens held off a determined Dan Older to score his first ever DirtCar Pro Stock Series triumph and Brian Comeau made it back to back wins taking the 25 lap Jole McNalty Memorial Vintage event.

Billy Decker and Ryan Arbuthnot led a field of 30 big block modifieds to the green flag with Decker taking over the lead as they headed for turn 1 over Jimmy Phelps, Ryan Arbuthnot, Matt Sheppard and Steve Bernard. The first yellow flew for Mario Clair who slid off the track in turn 4 while under the same caution a 3 car tangle occurred in turns 1 and 2. On the restart Decker remained in control with Phelps, Arbuthnot, Bernard and now Tim Fuller joining the fight as he charged to 5th from his 14th starting spot. Jimmy Phelps has been strong all year on the series and tonight he made his presence known as he shot by Decker on lap 30 to take over the lead with Decker falling to 2nd while Arbuthnot continued his great run as he completed the top 3. With a fast race track drivers were using the top lane and using it well as Phleps and Decker started to move away from the field, Matt Sheppard wanted to join the fight as he got by Arbuthnot for 3rd on lap 36 and set sail after the top 2 drivers. On lap 44 Shane Pierce spun his car in turn 4 while Mike Maresca experienced the same issue, only in turn 2. On the restart it was Decker Phelps and Sheppard going at it once again over Arbuthnot and now Pat Ward charging to 5th. As the laps wound down and the track changed Jimmy Phelps started to have some issues with the handling of his car which allowed Decker to close in. On lap 83 Billy Decker took over the top spot leaving Phelps and Sheppard to battle for 2nd. With Decker running away from the field it seemed nothing could slow him down but a caution. That’s just what happened on lap 93 as Alain Boisvert made hard contact with the turn 4 wall nearly sending his car upside down. Boisvert was unhurt but his car was heavily damaged. When the green flew Billy Decker charged away and with no challenges from anyone “The Franklin Flyer” would march to victory his 4th of the season and first since Eldora on July. 19th. Jimmy Phelps would cross in 2nd over Matt Sheppard, Ryan Arbuthnot and Danny Johnson.

In the DIRTcar Sportsman Series the title was up for grabs as Dave Marcuccilli held a 35 point lead over Rocky Warner, with Warner not in the show Ron Davis III became his title rival as he trailed by 65 points. Locally Ryan Scott was trying to hang on for his first Ogilvie’s Quad Crown Series title as he held an 18 point cushion over Dylan Evoy. When the green flew for the 50 lap season finale outside pole sitter Kyle Inman wasted no time jumping to the head of the field over Steve Barber, Johnathon Ferguson, Jon Mills and Dylan Evoy. Inman had never seen the Brockville Ontario Speedway before and was driving the track like a 20 years veteran as he led the opening 14 laps. Dylan Evoy was also on the charge as he made his way to the 2nd spot taking it away from Steve Barber and began to run down race leader Kyle Inman. On lap 15 Evoy would make the pass look easy as he drove by Inman to take the lead with Johnathon Ferguson completing the top 3 spot. These 3 drivers were the class of the field as they drove away and looked to settle this one amongst themselves. As far as the title battle Dave Marcuccilli and Ron Davis III were caught in traffic the entire night and were within 2 spot of each other as the laps clicked off. In the Ogilvie’s title chase Dylan Evoy was doing what he needed to do as he led the way but Ryan Scott’s night was not going to plan. Scott was caught in the mid portion of the field all night and would eventually wind up 21st on the grid. In the end Dylan Evoy would be the dominant force as he drove on to collect his 2nd career Fall Nationals Sportsman win 3rd career DirtCar Sportsman win and the 2017 Ogilvie’s Quad Crown Series title. Kyle Inman drove a great race to come home 2nd with Johnathon Ferguson, Steve Barber and Tyler Trump completing the top 5. Despite a 10th place effort by Ron Davis III, a 12th place run for Dave Marcuccilli was good enough to claim his first DirtCar Sportsman Series Title.

The DIRTcar Pro Stock Series was back at the Fall Nationals for the first time since 2012 and David Seguin would rocket from his 5th starting spot to claim the lead over Stephane Lebrun, Jay Corbin, Guy Viens and Dan Older. Seguin had a successful season at Cornwall in 2017 and was poised to collect his first ever series win but Lebrun and Corbin were on the charge and making him work for it. On lap 9 Pascal Payeur and Dany Voghel would come together o the back stretch bringing out the caution for the first time. On the restart Seguin picked up where he left off while Guy Viens was on the move taking 2nd and the battle was on. Seguin, Viens and Corbin were all in a heated battle for the top 3 spots until Jay Corbin experienced mechanical issues just past the halfway point ending his great drive and a chance for the win. With Corbin out of the running the battle for the lead was even more intense as Dave Seguin and Guy Viens had a spirited battle in the closing laps. On lap 29 Steve Chaput lost control of his car in turn 1 and 2 send his car upside down. Chaput was unhurt and would walk away from the accident. On the next restart business was picking up as Viens was putting all the pressure ob Seguin for the race lead. On lap 33 Guy Viens took over the lead with Dan Older making a late race run to 2nd. Over the closing laps Dan Older would try everything to get by and on lap 49 of the 50 lap affair is where the intensity picked up. Older would draw even with Viens heading down the backstretch. Heading into turn 3 both drivers would stay side by side, as they worked off turn 4 Guy Viens would edge out Dan Older to score his first ever DirtCar Pro Stock Series win. Older would cross in 2nd with Stephane Lebrun, Jocelyn Roy and Bruno Cyr collecting the top 5 spots. Rob Yetman had a dominant season and would be crowned the 2017 DirtCar Pro Stock Series Champion.

The 25 lap $1000 to win Jole McNalty Vintage feature would close out the night and Brian Comeau was looking to repeat as a Fall Nationals champion as he grabbed the lead early on over Josh Powers, Luke McKinnon, Nathan Berry and Cory Winters. Comeau would have a dominant race car over the entire 25 lap distance while behind him it was a spirited battled between Powers, McKinnon, Berry and Winters. Nathan Berry would make his way forward as charged his way to the number 3 spot and tried at will to catch both Comeau and Powers. In the end Brian Comeau had everyone covered on this night as he notched his 2nd straight win in the Vintage division at the Fall Nationals. Josh Powers would come home solidly in 2nd while Nathan Berry, Luke McKinnon and Cory Winters completed the top 5.

Day 2 of the 1000 Islands RV Fall Nationals gets underway as the DirtCar 358 Modified Series will take center stage with Chris Raabe and Steve Bernard in a tight battle for the title. Also on the card an open 360 Sprint car show along with the Street Stock and Mini Stock Invitational. The green flag drops at 5pm with hot laps and time trials taking place at 4:30. 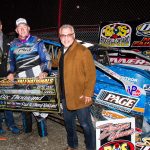 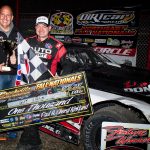 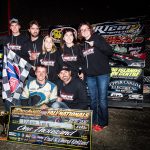 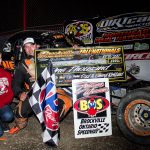