Dingwall Does it at Brockville 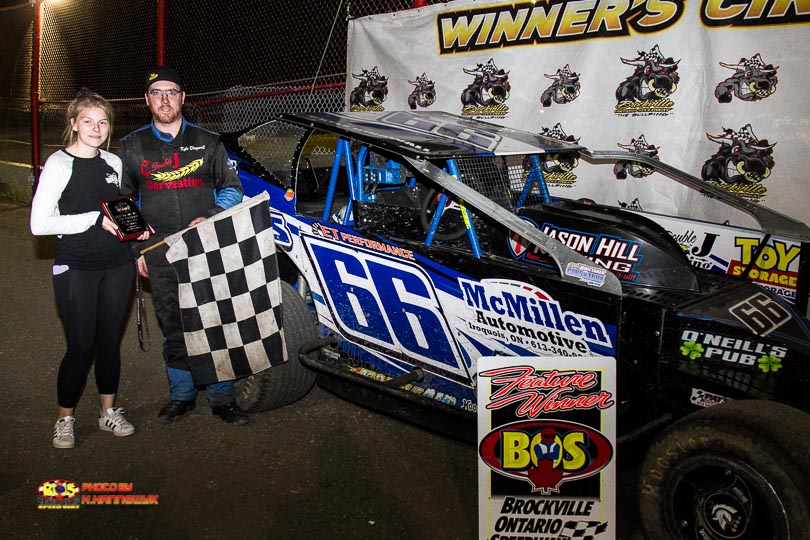 BROCKVILLE, ONT – Another Saturday night of racing action continued with the 50th anniversary season at the Brockville Ontario Speedway this past Saturday night. The fans were treated to an appearance from 1978 Modified track champion Dave ”The Slip” Heaslip, who was on hand as Grand Marshall. A total of 7 feature events were ready to go which included a 50 lap Mini Stock event, which was full of action.

The night kicked off with the held over Draper Doors Rookie Sportsman feature from May 18th and Karl Potvin was the story of the night as he took the lead early over Tyler Stewart and Evan Reynolds. The top 3 had the fastest cars through the entire 15 lap distance and were able to make a great race out if as well. Over the final laps Stewart tried at will to get by but Potvin would hold on to score the win over a fast closing Tyler Stewart and Evan Reynolds.

Mark Packer and John Lamarche led the field to green at the start of the Mini Stock 50 lap event with Packer taking the early lead. A pair of quick yellow flags flew in the opening 5 laps for Hayden Brown and Justin Leroux. Both were able to rejoin at the tail of the field. On the restart Lamarche continued to lead the way but it was Cornwall invader Marc Dagenais taking the top spot away a few laps later with Jamie Larocque taking 2nd and Jared Galway rounding out the top 3 positions in the early laps. As the race approached halfway the leaders began to work traffic as Dagenais, Larocque, Galway along with Tyson Slinger and Brandon Henderson joining the battle in the top 5. On lap 29 Brandon Halliday slowed to a stop in turn 3 bringing out the yellow. Under the same caution 2nd place Jamie Larocque slowed to a stop on the front stretch with smoke pouring from underneath his car. Dagenais would continue to lead the way with Galway in 2nd but Dagenais had a fast car and was able to pull away. On lap 44 the great run for Jared Galway ended as he went off turn 2 and hit the wall separating the track and pit road. Galway would drive the car back to the pits. On the final restart Marc Dagenais continued to lead but The Dentman Dave Watchorn was all over him and waiting to make his move. Over the final 6 laps Watchorn hounded the leader and things got interesting on the final lap. As the top 2 headed into turn 3 Watchorn got a big run off the outside and pulled even with Dagenais heading to the checkered flag. In a near photo finish Marc Dagenais would claim the win in the biggest event for the 2019 Mini Stock season. Dave Watchorn would cross a very close 2nd with Tyson Slinger, Andrew Leroux and John Lamarche completing the top 5.

In 1000 Islands RV 358 Modified action Kyle Dingwall was the story of the night as he dominated the early portion of the 30-lap feature over Ryan Poole and Andy Lloyd. By lap 2 Dingwall had a huge lead on the field as Lloyd was pressuring Poole for 2nd, with Steve Barber and Luke Stewart completing the top 5. On lap 11 Lee Ladouceur sailed off the track in turn 3 bringing out the yellow. Under the same yellow 4th place Steve Barber headed to pit road. On the restart Dingwall remained in command but a new challenger in the form of rookie Tristan Draper and was putting all the pressure on the leader with opening day winner Ryan Arbuthnot right there to challenge from 3rd. After a lap 16 caution which saw Steve Bilow spin in turn 4 Dingwall would once again jump into the lead but The Highside Hustler Tristan Draper started to make his move. Draper took to the top and showed the nose to Dingwall on lap 20, which was all the leader needed to see. With Draper running the top lane in 3 and 4 Dingwall would change his line and take the top side away from Draper which allowed Ryan Arbuthnot to close in from 3rd. Dingwall once again pulled away to a 7-car length lead and appeared to be on his way to the win. On lap 28 the yellow flew for Andy Lloyd who slowed on the back stretch. On the final restart Draper tried everything he could to keep pace with the leader, but on this night, Kyle Dingwall was too strong as he led every lap to score the win. Ryan Arbuthnot was able get by for 2nd at the line with Draper 3rd, Tim Fuller nipped Tim O’Brien at the line to complete the top 5 finishers.

It was girl power on the front row for the start of the 25 lap Sportsman feature as Melissa Gifford and Geneva Sheffield led the way into turn one with Gifford getting the advantage over Geneva Sheffield, Jarrett Herbison, Shane Stearns and Jesse Hudson. Gifford would open up the lead to 4 car lengths as behind her Shane Stearns was making some big moves as he charged to 2nd while Sheffield and Herbison battled for 3rd. On lap 6 Stearns was able to take the lead away as Gifford remained close by in the runner up spot. On lap 6 Dale Gifford lost control of his car slid off the track in turn 4. It appeared as though lap 6 would never finish as two quick yellows flew, first for Chris Ferguson who lost a tire and axle on the front stretch. Then a 5-car tangle in turn two occurred which saw Geneva Sheffield break the front end on her ending a solid run and the yellow flag flew one more time. All drivers involved rejoined the field. Once racing resumed Shane Stearns, Jarrett Herbison, Xavier Andrews and opening day winner Ryan Scott put on a great show for the fans as they battled for position. On lap 10 Melissa Gifford who was running in the 7th spot slammed the outside wall in turn 4. Gifford was unhurt but the car suffered heavy damage ending her great run. On the restart it was once again another great 4 car battle for the lead as Herbsion took over the lead and brought Ryan Scott to 2nd with Stearns, Andrews and Johnathon Ferguson now 5th. On lap 20 the great run for Stearns ended as he got into turn one too hard and nearly clipped Ryan Scott, as he spun collecting 5th place Johnathon Ferguson. On the restart Herbison continued to lead but Ryan Scott was on the charge as he took 2nd from Andrews and began to pressure Herbsion for the lead. On lap 24 Xavier Andrews great night ended as he slid off the track while running 3rd. He would recover to finish 13th. On the final restart Ryan Scott made his move as he took over the lead in turn two from Herbison and saved his muscle for when it counted. Ryan Scott would march on and score back to back wins in the Sportsman division at Brockville. Although disappointed Jarrett Herbison was pleased with his runner up finish with Jon Mills, Jonah Lewis and Tyler Reynolds completing the top 5.

In the night cap for the Draper Doors Rookie Sportsman Terry McClelland was the story of the night as he took the lead with Kalen Draper and Evan Reynolds close by in the top 3. A 4-car spin on the front stretch slowed the field on lap 6, all were able to continue. McClelland would continue to lead on the next restart as Draper and Reynolds once again tried their best to close the gap. On lap 14 a top 3 run for Reynolds ended as he spun in turn 2. On the final restart Terry McClelland would go unchallenged and claim his first ever win in the Rookie Sportsman class. Kalen Draper held on for 2nd with Dylan Kirkland, Domonick Merkley and despite the spin Evan Reynolds rebounded to finish 5th.

The 15 lap Street Stock feature saw Sylvain Gauthier take the lead away at the drop of the green but it did not last long thanks to the tricky 2nd turn as Gauthier slid off the track bringing out the yellow. When the green returned Michael Dillon and Keith Riddell staged a battle for the lead with Dillon winning out over Riddell and a fast closing Tyler Bushey. After a great battle Bushey was able to claim the top spot from Dillon and author a dominant performance. Without a yellow in the remaining laps it was smooth sailing as Tyler Bushey ran away to score his first win of the season with Michael Dillon, Kyle Massey, Sylvain Gauthier and Bob Williams completing the top 5.

The final event of the night saw the 12 lap Outlaw Vintage feature go green and a battle between two former champions ensued as 2010 Vintage champion Jason Powers took the lead away with Kenny Polite, the defending champion, holding 2nd and Josh Powers close by in 3rd. Josh Powers was able to get by for 2nd and the two Powers battle for the win. On the final lap Jason would get the better of the two drivers as he scored his first Outlaw Vintage win in a long time. Josh Powers held on for 2nd over Kenny Polite and Jeff Bode.

With another busy night in the books next week will be even busier with the Ogilvie’s Auto and Fleet Triple Crown Series for the 1000 Islands RV 358 Modifieds and Sportsman. The Draper Doors Rookie Sportsman, Street Stock and Mini Stock will also be on hand. The first ever Modified champion Howard Shaw will be on hand as Grand Marshall for the evening. Racing gets underway at 7pm. For more information be sure to follow us on Facebook, Twitter and our new Instagram page as well. For up to date news, points standings and everything happening at the track, visit our website at brockvillespeedway.com.

Heat Winners from May 18th: Karl Potvin and Evan Reynolds 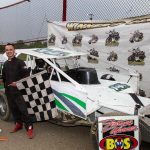 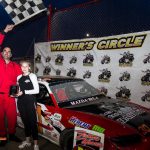 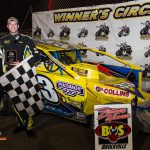 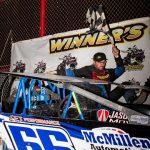 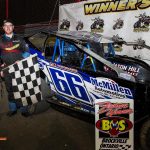 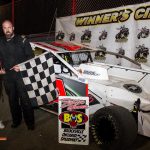 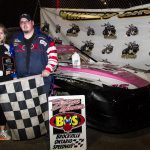 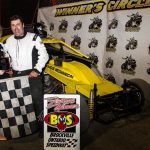