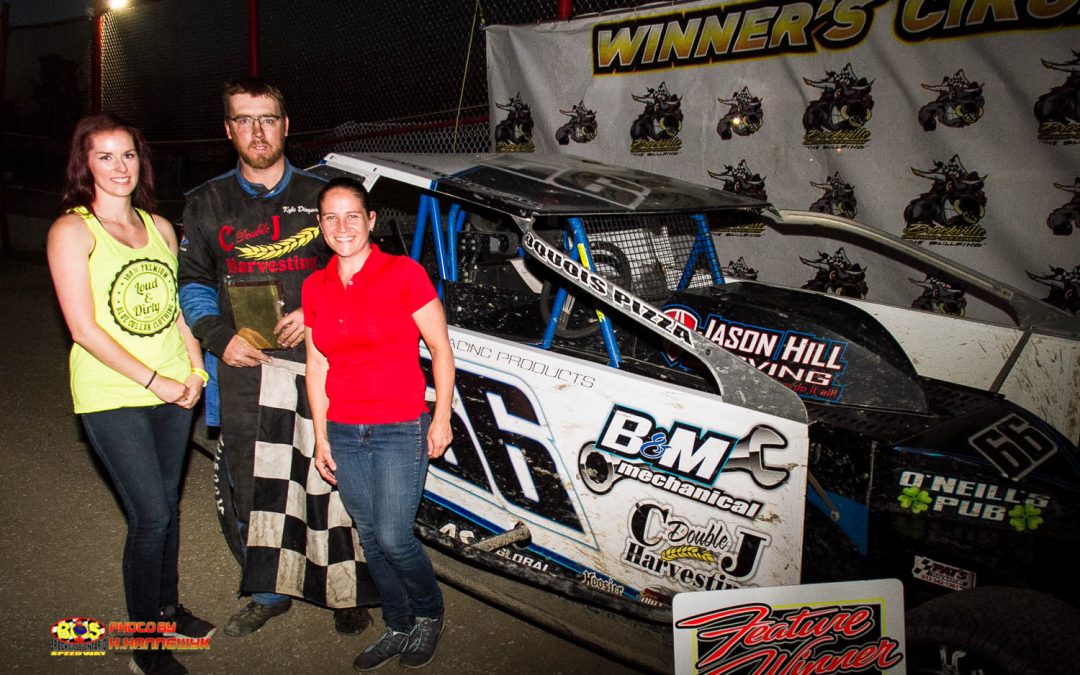 BROCKVILLE, ONT – Another perfect night for racing this past Saturday night saw all 5 classes in action and some very intense racing all night long.

The 358 Modified feature was set for 30 laps with Joe Banks and Gage Morin leading the field to the green flag with Banks getting the advantage over Morin and Ryan Poole. A quick caution flew on lap 2 setting up a restart which proved to be a good thing for Morin. When the green flew Morin took the lead using the outside lane with Banks relegated to 2nd over Luke Whitteker, Kyle Dingwall and Ryan Poole. Morin began to open up his lead and after many weeks of struggling, was looking in great form to possibly get his first win of the year. On lap 7 the caution flew for Corey Wheeler who went off the track in turns 3 and 4. Gage Morin got the lead from the outside on the previous restart and surprisingly chose the bottom when the green flew again. Luke Whitteker took full advantage and used the top lane to grab the lead with Dingwall making a big charge to 2nd with Morin dropping back to 3rd. Kyle Dingwall had a fast race car as he ran down Whitteker for the race lead. On lap 14 Kyle Dingwall took the lead and started to take over the entire field leaving Whitteker, Luke Stewart who charged from 9th on the grid to 3rd over Morin and Ryan Arbuthnot. on lap 18 Dingwall had well over a straightaway lead but the caution flew for Bryan Rogers who lost control of his car in turn 4 . When the green flew Dingwall stayed in command but Ryan Arbuthnot and Danny O’Brien were on the move as they battled for top 5 spots late in the race. Arbuthnot would charge to 2nd with Whitteker still 3rd over Danny O’Brien and Luke Stewart. Over the final laps Kyle Dingwall proved to be too much for this quality field on this night as he dominated to win his first feature of 2018. Arbuthnot took his 2nd runner up finish of the weekend over Whitteker, Danny O’Brien and Luke Stewart held on to finish out the top 5 in 5th.

The Sportsman feature saw Alex Gagnon take the lead from the pole in the 25 lap affair over Jason Cummings Jarrett Herbison Tyler Reynolds and Jason Shipclark. At the completion of lap 1 the caution flew as Dale Gifford spun in turn 3. That was just the start of the carnage. On the next restart Alex Gagnon and Jason Cummings hooked bumpers coming to the green flag causing a chain reaction pile up on the front stretch. With no place to go Geneva Sheffield slammed violently into the back end of Jesse Hudson’s car and with 7 cars in total involved the track was blocked and the red flag was displayed. All drivers were able to climb out under their own power, Sheffield had to be assisted from her car and did go to the ambulance to be evaluated. Despite the hard hit Sheffield would be ok. On the restart Tyler Reynolds took control of the race but 2nd year Sportsman driver Xavier Andrews would putt on an early charge. On lap 11 Andrews took control of the race leaving Reynolds to battle for Ryan Scott for 2nd with Jason Shipclark and Tristan Draper completing the top 5. Over the next 10 laps Ryan Scott and Xavier Andrews put on a classic side by side battle for the lead which left the crowd on the edge of their seat. Andrews would fight off several advances by Scott and with 5 to go was able to put some distance between the 2 drivers. On the final lap Xavier Andrews closed in on a lapped car which allowed Scott to close in as well. Andrews would navigate the traffic perfectly and protected the bottom lane that Ryan Scott runs so well, all the way to his first career Sportsman feature win. Ryan Scott came home 2nd over Jason Shipclark who had a spirited battle for 3rd with Tristan Draper who crossed in 4th, Tyler Reynolds collected the number 5 position at the finish.

The Street Stock division is by far light on racing action and on this night there was plenty of it as the fans saw what many considered the race of the year. Kyle Massey and Sheldon Hoogwerf led the field to green with Hoogwerf taking the lead away but 3rd place starter Todd Raabe didn’t wait long as he charged from 3rd to make a bid for the top spot. Raabe would get the position and would brong Tyler Bushey and Michael Dillon with him to make up the top 3. On lap 5 Matt McNamara who was making his debut, spun off turn 4 and ended up in the fence. Despite the hard hit McNamara was able to continue on. When the green flew Michael Dillon assumed control over the field and was looking to end a winless drought that dated back to 2016. Dillon was by far in the lead comfortably as Todd Raabe and Tyler Bushey were all over him making a great 3 car battle for the lead. As the laps wound down not one of those 3 drivers had a clear cut advantage. On the final lap Michael Dillon was trying his best to hold off Todd Raabe, the only way for Bushey to get to the lead was to go 3 wide which he did going down the back stretch. Heading into turn 3 with Raabe on the bottom, Dillon in the middle and Bushey on the top they all charged to the checkered flag and at the finish Michael Dillon claimed victory in one of the closest finishes seen in many years in this division. Bushey edged out Raabe for 2nd with Sheldon Hoogwerf and Peter Raabe completing the top 5.

In Mini Stock it was the Brighton Speedway invaders who would steal the headlines. When the green flew to start the feature Tyler Hazelaar would end up off turn 4 with Dustin Bode, who was debuting a brand new car, ended up into the back bumper of Hazelaar’s car. Bode was helped by medical staff to the ambulance but would otherwise be ok. When the green flew and the laps began to click off it was Tyler French taking control of the race over Matt French, Tyson Slinger, Jarod Galway and Brandon Henderson. French was making his first start of the season and was making it look easy as he opened up a sizeable advantage over the rest of the field. On lap 8 Logan Woods saw a great run go away as he spun to the infield on the front stretch. Under the same caution Dylan Kirkland slowed on the front stretch with a problem. When the green flew Tyler French continued his domination over Matt French and Dominick Merkley. It was a night of domination for Tyler French as he would go unchallenged to win in his first start of the season in the Mini Stock division. Matt French would cross in 2nd over Dominick Merkley, Brandon Henderson and Jarod Galway.

The 15 lap Rookie Sportsman feature went caution free on this night and Gavin Riddell was the class of the field. After starting 3rd he took the lead early on over Brock Cullen and Xavier Perrin. Riddell would have the field under his control all night long and without the aid of a yellow flag, Riddell would cruise to his 2nd win of the season going away. Brock Cullen saw his streak of 3 in a row come to an end with a runner up finish with Xavier Perrin completing the top 3.

Next week a full program will be on the card for all 5 divisions plus the return of the Outlaw Vintage Modifieds. Racing action kicks off at 7pm. 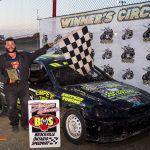 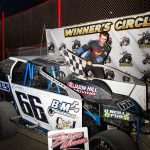 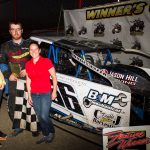 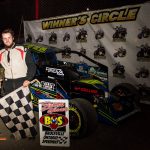 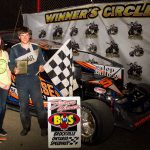 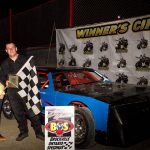