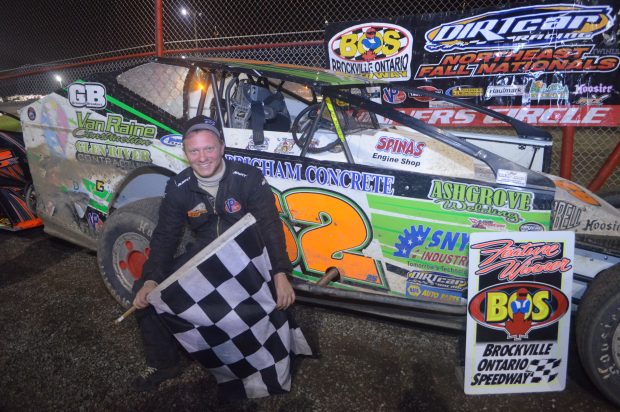 A packed house was on hand this past Friday night as day 1 of the 1000 Islands RV DirtCar Northeast Fall Nationals was ready for action. The 358 Modified Super DirtCar Series Go Nuclear Late Models and a special 30 lap Street Stock Invitational highlighted the night. With titles on the line in the Modified and Late Model divisions it was get up and go time for all drivers.

The 358 Modified Super DirtCar Series was set for their 100 lap season finale and Chris Raabe was looking to maintain a 95 point advantage on David Hebert in an attempt to claim his first ever series title.

Ryan Arbuthnot and Bud Light 200 champion Stewart Friesen led the field of 30 cars to the green flag with Arbuthnot getting the top spot away over Friesen, Carey Terrance, Gage Morin and Dany Bilodeau. The top 3 drivers would have their way with the field until lap 11 when Brian McDonald spun in turn bring out the first caution of the race.

On the restart Arbuthnot continued his great run but Stewart Friesen, aboard the JF Corriveau owned ride, made his way by Arbuthnot on lap 16 and began to put on a driving clinic. Friesen would pull away from the field by over 2 seconds as behind him Carey Terrance and Mike Maresca were in a battle for the 3rd spot. Maresca would hold the spot and try his best to run down the top 2 drivers.

On lap 30 Danny O’Brien made contact with the wall on the front stretch bringing out the caution. When the green flew it was once again Friesen out in front but Arbuthnot and Maresca were on the move. On lap 33 Maresca would lose the handle in turn 4 while running 3rd and the yellow flew for a 3rd time.

When the green came back out Stewart Friesen would be the dominant force as he once again pulled away to a huge lead and would maintain that big lead for the next 11 laps until the red flew for Bobby Herrington who flipped his car in turn 2. Herrington would climb out uninjured but the car was heavily damaged. It appeared as if Friesen was going to keep his Super Dirt Week momentum going on this night until lap 58 when he slipped up in turn 2 allowing Terrance to get by for the lead bringing Kyle Dingwall, Erick Rudolph, Ryan Arbuthnot and Danny Johnson to the top 5. Friesen would fall to 6th but would not slow his charge.

The championship battle was still a good one as Raabe was doing all he could do running just inside the top 10 the entire night while David Hebert knew he needed some help in order to grab the championship. Hebert would lose the handle on his machine ending his great run as the title began to slip away.

At the front Carey Terrance was looking for his first ever series win but Erick Rudolph was on the charge as he slipped by Dingwall for 2nd and closed in on the leader Carey Terrance. The top 2 drivers were charging hard and Terrance was trying to hold on to a race car that began to loosen up on him. On lap 97 Rudolph made the move on the high side in turn 4 to take over the lead. Despite several attempts to get back by Carey Terrance would fall 1 spot short as Erick Rudolph marched on to his 4th tour win of the year over Terrance who finished 2nd once again followed by Dingwall, Ryan Arbuthnot and David Hebert who rallied back to finish 5th.

The Go Nuclear Late Model Series was set to go for their 35 lap season finale and by starting the event Charlie Sandercock would claim his 2nd series title in the last 3 years.

There still was a race to be run and Brandon Mowat was on the charge as he took the lead early on in the 35 lap contest with Phil Potts, Dale Caswell, Kyle Sopaz and Chris Fleming giving chase.

Having struggled in weekly competition at his home track of Brighton Speedway the Go Nuclear tour has been kind to Mowat picking up 2 wins at Humberstone and Mohawk. Behind him Caswell, Potts and the rest of the top 5 were having a fantastic battle for postion. Charlie Sandercock was truly the driver to watch as he struggled mightily through the first half of the race, ending up involved in 2 consecutive spin outs. He would restart 12th on lap 19 and would put on one of the most incredible drives in recent memory.

As the laps clicked off Brandon Mowat continued to lead as Phil Potts and now Adam Turner would make his way into the top 3. With 10 to go Mowat was in command but Sandercock was passing cars at will, getting to 4th with 5 laps remaining but was not done there.

As the final laps wound down Brandon Mowat was well on his way to his 3rd win of the year but Sandercock had made his way to 2nd and quickly reeled in the leader on the white flag lap.

Heading into turn 3 Sandercock made one final effort at the leader, but Brandon Mowat had just enough to lead all 35 laps and score his 3rd career series win. Sandercock made his championship statement coming home a close 2nd over Phill Potts, Chad Homan and Adam Turner.

The Street Stock 30 lap invitational event was ready for battle as 33 cars representing several race tracks from Brockville to Merrittville were on the charge when the green flew.

Brandon Gregory would take the lead away at the drop of the green flag over track champion Alex Gagnon with Todd Raabe, Brighton regular Justin Ramsey and Tyler Bushey.

Gregory had a great race car but Justin Ramsey who has had success at Brockville in Mini Stock action, would take over the lead bringing Raabe to 2nd with Gregory now 3rd. These 3 drivers put on a great show over the next 12 laps before a caution flew just past halfway.

When the green came out Ramsey continued his strong run as Gregory was looking to the outside and would inch closer to the leader. On lap 23 that would all go away as Brandon Gregory made heavy contact with a stopped car in turn 4 ending his shot at the win.

The green flew for the final time and Justin Ramsey was not to be denied as he marched on without any issues to score his first win of the season and 3rd different winner of the Street Stock Invitaional. Raabe would cross in 2nd with Tyler Bushey close by in 3rd, Nick Gauvreau would finish up 4th and Derek Cryderman would charge from 19th to finish 5th.

Saturday the 2nd and final day of the 1000 Islands RV DirtCar Northeast Fall Nationals will get underway. Live music gets going at 10am in the turn 4 fan zone plus an autograph session at12:30 featuring Jessica Power, Danny O’Brien, Brett “The Jet” Hearn and Bud Light 200 winner Stewart Friesen. All on track activity begins at 2pm with hot laps and time trials for the Big Block Modfied Super DirtCar Series and Sportsman Super DirtCar Series, Mini Stocks and Outlaw Vintage are also on the card. The first heat is slated to go green at 4pm.