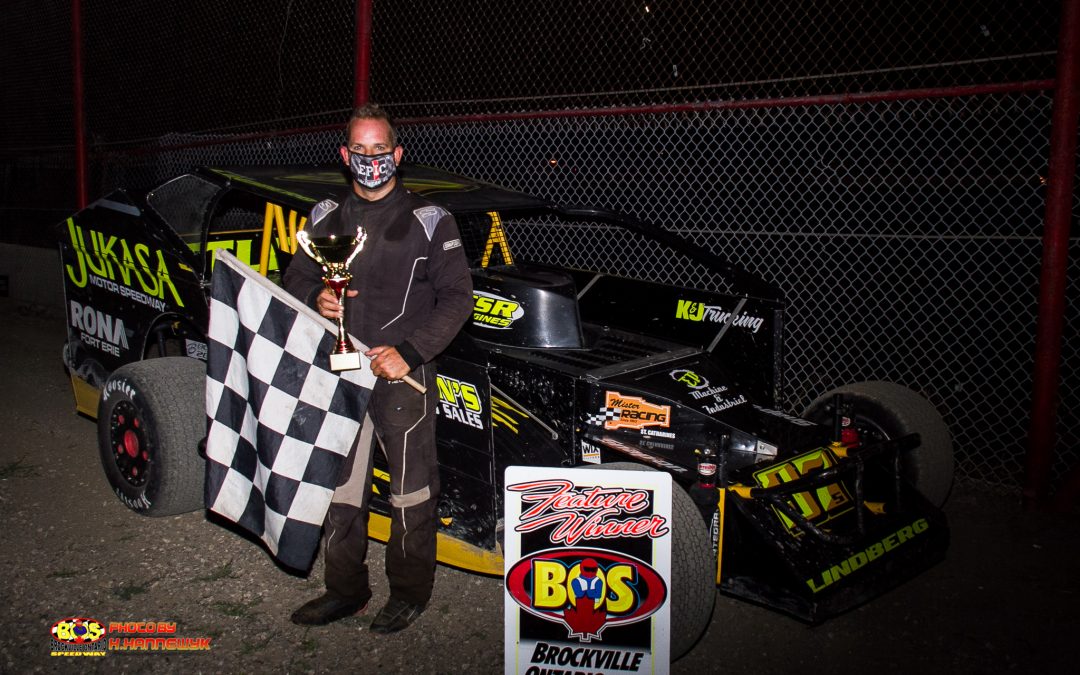 The 1000 Islands RV Summer Sizzler at the Brockville Ontario Speedway this past Saturday night lived up to its name, Sizzling. Temperatures reached to the mid-thirties with the humidity which took its toll on both the track itself, as well as the drivers behind the wheel.

In the 35 lap 358 Modified feature event Madison Mulder battled for the lead with Merrittville Speedway invader Gary Lindberg at the start if the event with Ryan Arbuthnot, Austin Wood and Mike Bowman completing the top 5. It didn’t take long for the first caution to fly as a three-car tangle in turn one involving Chris Raabe, Johnathon Ferguson and Joe Banks took place. Raabe would need some assistance back to the pits while Banks and Ferguson were able to continue. On the restart Mulder took the lead again but Lindberg would use the middle line through turns three and four to grab the lead while Arbuthnot, Wood and Bowman continued their early race success completing the top 5. Once in front Gary Lindberg would stretch the advantage to over a straight away leaving many to wonder if he could be caught. On lap 16 Lindberg still held the lead as all drivers would migrate to the bottom of the speedway making passing tough. On lap 17 the great run for Madison Mulder would end as he slowed off turn 4, bringing his ride to the infield. Once the green came back out Lindberg once again was the driver in charge over Arbuthnot and Bowman, but behind them 2017 Brockville Champion Luke Whitteker was trying to make the outside lane work and he did just that as he pulled even with Pete Bicknell in a battle for 5th. Bicknell would fend off Whitteker and charge after Austin Wood for the 4th spot. On lap 23 the yellow flew for Corbin Miller who spun in turns three and four. On the restart Lindberg once again would get a great launch charging to a 4-car length lead over Arbuthnot, Bowman, Wood and Kyle Dingwall. With 5 to go it appeared Gary Lindberg was on his way to an easy win, but the caution flew for Dylan Evoy who spun off the top side of turn 3. On the final restart Lindberg was not to be denied as he pulled away in the final laps to secure his first ever Brockville 358 Modified feature win. Ryan Arbuthnot held on for 2nd with Mike Bowman, Luke Whitteker and Pete Bicknell would make a late charge from 7th to finish out the top 5.

The 25 lap Sportsman feature took the green flag with Jarrett Herbison taking the top spot over Cedric Gauvreau, Xavier Andrews, Ryan Stabler and Jessica Power. The green flag would quickly be replaced by the caution at the completion of lap one as Mario Genest clipped an infield tire breaking the front end on his ride, ending his night early. When the green flew Herbison remained in front but once again the caution would fly by lap three for a pile up in turn 1. All drivers would pull away and be able to continue. Herbison got a great jump when the green flew once again with Jessica Power making a big move from 4th to 2nd getting by both Gauvreau and Andrews. The top two drivers began to run away from the filed and hold their own battle for the lead. Power would get to the back bumper but the inside lane was dominant on this night as Herbison remained up front and in control. As the laps wound down Jarrett Herbison seemed like he was well on his way to his 2nd win in the span of a week, however the yellow flew on lap 16 bunching up the field for another restart. When the green flew Herbison remained in front but Cedric Gauvreau went on the attack taking 2nd back from Jessica Power but had some work to do to get by Herbison for the lead. In the final laps Jarrett Herbison was rock solid as he held off both Gauvreau and Power to claim his third career Brockville Sportsman win. Behind the top three Xavier Andrews scored a 4th place effort with Dave Wilgosh getting by Ryan Stabler for a 5th place finish.

Ryan Hunsinger was dominant at the start of the 25 lap 1000 Islands RV Crate Sprint Car feature with Jacob Dykstra and Darren Dryden giving chase. Hunsinger used the bottom lane to his advantage and was able to pull away from the field in the opening laps. An early yellow came out on lap 3 as Dave McKnight Jr. lost the handle on his ride in turn 4. When the green returned it was Hunsinger in control over Dykstra and Dryden with DJ Christie and Brett Stratford completing the top 5. On lap 9 Jeffrey Weare, who was making his Crate Sprint car debut, tangled with Tyler Ward on the backstretch ending their nights early. On the restart Hunsinger remained in control but DJ Christie was on the move rim riding around the outside of the speedway as he closed in on the top 3. Up in front Hunsinger continued his great driver but be hind him a tangle between Jacob Dykstra and Darren Dryden forced Dryden off the track in turn one and the yellow flew once again. On the restart Hunsinger led but DJ Christie was on the move as he took 2nd from Dykstra and reeled in Hunsinger as the two put on a spirited battle for the lead. After using patience DJ Christie would move around Hunsinger with five laps to go to take over the lead. From there it was no contest as DJ Christie would cruise to the win over Hunsinger, Luke Stewart came from 11th on the grid to finish in third over Jacob Dykstra and Adrian Stahle.

It was no surprise to anyone in the grandstands or the competitors that James Clarke would take the early lead as the 25 lap Mini Stock feature took to the speedway with Yan Potvin, Jarrod Galway, Mike Gaucher and Justin Jodin. Clarke was on cruise control and looking to remain undefeated in Mini Stock action at both Cornwall and Brockville in 2020. On lap 4 Brandon McMillan would slow to a stop on the front stretch bringing out the yellow. As the green flew it was Clarke in control but veteran Mike Gaucher would make his way to second and the battle was on for the lead. On lap 9 Gaucher would flex his muscle as he took over the top spot and from there the top two drivers would put on a show for the fans as they cut through slower cars with neither driver letting up. Behind them Justin Jodin was on the charge taking the number three spot from Yan Potvin with Jarrod Galway completing the top 5. On lap 16 new comer Ian Reid would go for a spin in turn 4 bringing out the yellow, Reid would recover for an 8th place finish. On the final restart Gaucher and Clarke continued their battle for the win but Justin Jodin would close in and make it a three-car battle for the top spot. On the final lap Gaucher led but Clarke was determined to get the lead. In turn one Clarke and Gaucher made slight contact but not enough to rattle Gaucher as he held off the charge from James Clarke to score the win over Clark, Jodin, Yan Potvin and Brandon McMillan would rebound from early race struggles to round out the top 5. Oddly enough, Gaucher would receive a $50 bonus for hard charger on the night, which was put up for grabs by….yes the James Clarke JML 2X race team.

In the 15 lap Rookie Sportsman feature Fire Swamp once again looked to be in complete control of the field as he led early on over Michael Delormier, Blayden Arquette, Andrew Young and Stephane Fournier. Swamp would lead the opening 5 laps until the yellow flew as Holly Denard spun in turn 3. She would be able to continue on. When the green flew Swamp remained in front but Michael Delormier was on the move taking 2nd from Young and quickly reeled in Swamp for the lead. With 5 laps to go Delormier was able to get alongside Swamp in turn one as they battled for the top spot. Swamp drove a bit too hard into the turn and slipped off the high side, allowing Delormier to drive away. At the checkered flag Michael Delormier would score his first Brockville win over Swamp, Andrew Young, Blayden Arquette and Stephane Fournier.

The BOS takes this coming Saturday off but will be back for the final three Saturdays in the month of August as well as September 5th. Schedule of events and further information will be coming forward soon and you can stay tuned to our website at brockvillespeedway.com or follow us on Facebook, Twitter and Instagram.

For Spectator Tickets please email with: Name, Phone Number how many tickets your looking for and the date to be added to the lottery draw. Make sure your name is on the subject line. You will be notified if your a lucky contestant for tickets. Draws close the Monday prior to the race date.