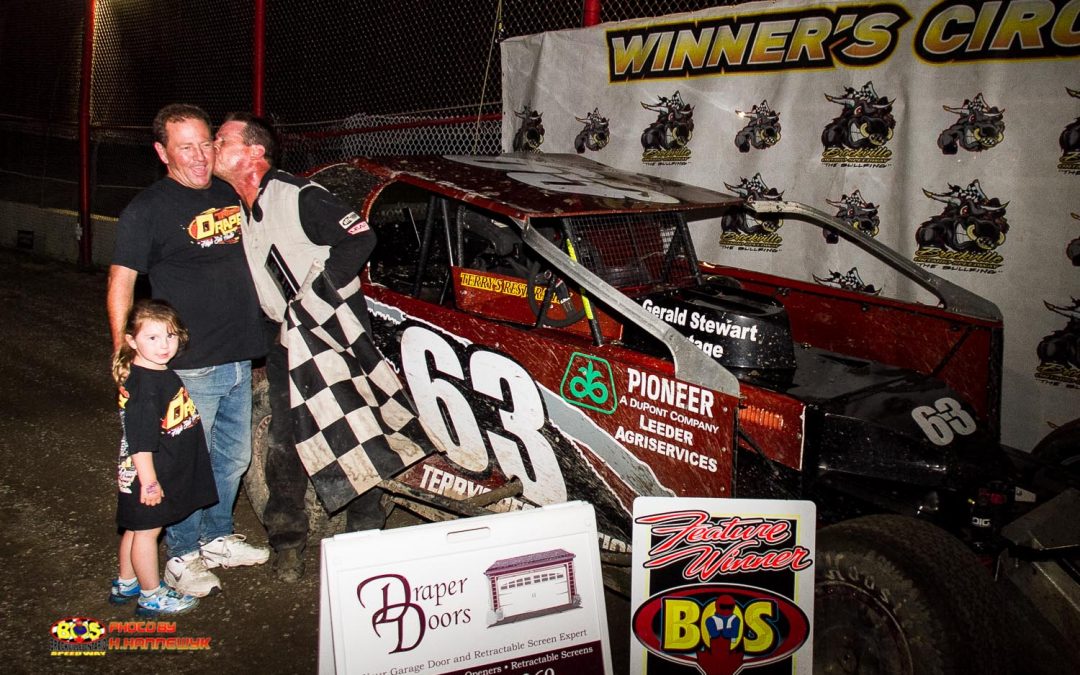 BROCKVILLE, ONT – It was an emotional nigh this past Saturday with Draper Doors on hand at the Brockville Ontario Speedway and a busy night as well with 6 classes of racing on the card. But the night belonged to 2 people who achieved the biggest honor at Brockville.

Long time car owner, the late Ford Dingwall was the first inductee into the Brockville Ontario Speedway Hall of Fame. Aside from his son and grandsons, Dingwall owned cars for many local racers and gave people an opportunity to go racing and have fun doing it. His generosity and willingness to put others ahead of his own needs, along with his desire to go racing anytime of any day, made him one of the most well respected people in the history of the speedway.

4 Mr. DIRT 358 Modified and 5 time track champion Pat O’Brien got the nod to be part of the 2018 class. O’Brien began his career right away in a 358 Modified after many years of helping his father and now fell Brockville Speedway Hall of Famer Pat O’Brien Sr. From that first day in 1985 O’Brien accomplished so much for several different car owners in his legendary career. He won his first of 3 DIRT championships in 1988 for then car owner Sheldon Legue and added a 4th and final title in 1995 with his own team. His biggest win came in 1990 in the Super DirtCar Series at Can Am Speedway. O’Brien started on the outside pole in the 90 lap event with a small block on the big half mile, led all 90 laps and became the first Can Am regular in the history of the speedway to win the event. O’Brien won 149th and final DirtCar sanction 358 event on September 1st 2012 at Brockville, and stepped out of the car in 2016.

When the racing action started up for the 30 lap 358 Modified feature Jason Riddell who has seen many struggles over the past year and a half, jumped out to the race lead over Chris Herbison, Joe Banks, Kyle Dingwall and Tim O’Brien. Riddell had without a doubt the fastest car on the speedway as he drove to a straight away lead by lap 4 while the rest of the top 5 tried to keep pace. Chris Herbison cleared all traffic by lap 5 and began to run down the leader. Herbison would get some help on lap 9 as the caution flew for Jeremy LaSalle who slowed in turn 3. On the restart it was Herbison using the bottom lane to take over the lead with Riddell, Dingwall, Danny O’Brien and Ryan Arbuthnot. Once in front Herbison began to pull away but Danny O’Brien was on the charge taking 3rd from Kyle Dingwall, then taking 2nd a few laps later from Jason Riddell and the battle was on. On lap 13 a great run for Riddell ended as he sailed off of turn 3 and 4 and the caution flew. When racing resumed it was Herbison out front once again but O’Brien and Dingwall were right there to challenge but the long time campaigner was up to the challenge as he started to run away from the field. Herbison would close in and have trouble in traffic allowing O’Brien to close from 2nd. In the meantime Ryan Arbuthnot made his way to 3rd and was looking to charge after the top 2. On lap 25 Tim O’Brien’s great night came to an end as he slowed in turn 4. On the final restart Herbison pulled away while Ryan Arbuthnot made a big move for 2nd, but that’s as far as he would get. Chris Herbison ended all the struggles in a big way with his first win of the year at Brockville over Ryan Arbuthnot, Danny O’Brien, Kyle Dingwall and Aaron Pugh.

In Sportsman action it began in a tough way for Dale Gifford as coming off turn 4 he battled with 2 other competitor for the lead and was forced to the high side and hit the turn 4 wall. Gifford was unhurt but his car was done for the night. On the restart Jason SHipclark used the top lane on the speedway to pick up the lead over Tyler Reynolds, Tristan Draper, Jarrett Herbison, Jesse Hudson and Johnathon Ferguson. The driver looking to end a winless drought which spanned over 2 year was Tristan Draper and on his sponsor’s night, began to get up on the wheel. Draper took 2nd from Reynolds on lap 6 and then ran down the race leader. On lap 8 Xavier Andrews slowed with a problem bringing out the yellow. One lap later Jason Shipclark spun in turn 2. This left Tristan Draper in the lead with Johnathon Ferguson now 2nd and Jesse Hudson 3rd. Once in front Draper started to run away but Ferguson was right there the entire way to try and challenge for the top spot. Draper remained in control and was looking in great shape to get back to victory lane. on lap 21 the great run ended for Tyler Reynolds who slowed with a right rear flat tire. When the final green flag flew Draper was able to get away leaving Ferguson and Hudson to battle for 2nd and 3rd. The monkey was finally off his back on his sponsors night as Tristan Draper would park it in the winner’s circle for his first win of the year. Johnathon Ferguson lost his car off turns 3 and 4 on the final lap allowing Jesse Hudson to move to 2nd over Jarrett Herbison, Shane Stearns who charged from 15th I his first 2018 start to finish 4th while Ryan Scott rounded out the top 5.

The 15 lap Rookie Sportsman feature saw history made on this night as Xavier Perrin led the field early on over Gavin Riddell and Melissa Gifford and was looking for his 2nd Rookie win of the weekend having won the previous night at the Mohawk International Raceway. His great run took a set back as him and Riddell tangled in turn 2 bringing out the yellow. This left Melissa Gifford in charge of the field on the next restart as she pulled away with Brock Cullen now taking 2nd. Gifford held a comfortable lead throughout the entire race as behind her Gavin Riddell was on the move after going to the pits as he challenged Cullen for 2nd but both still had work to do to catch the leader. In the end it was Melissa Gifford making history as she joined her father Dale as the only father/daughter combination to win a feature event in Rookie Sportsman at the speedway. Brock Cullen held on for another 2nd place finish with Gavin Riddell taking 3rd.

The Street Stock event had a couple of major story lines developing and the first one began with points leader Tyler Bushey experienced problem early on and looked like his night was over as he went pit side on lap 4. Bushey would return a lap down but was not totally out of the picture. The other story was Todd Raabe who had gone winless in 2018 and was making a statement and looking like the Todd Raabe of previous years as he led the way over Michael Dillon and Sheldon Hoogwerf. Raabe’s car was strong in the early laps and showed his strength as he pulled away from the field leaving the others with a lot of work ahead of them. On lap 5 Sheldon Hoogwerf spun his car in turn 2 ad the yellow flew. In the meantime Tyler Bushey made his way back to the field and was back in contention after receiving the lucky dog, getting back on the lead lap. On the final restart it was Raabe in control over Michael Dillon and Sylvain Gauthier. Over the final laps Todd Raabe was not to be denied as he marched on to his forst win of 2018 in the Street Stock ranks. Michael Dillon would hold on for 2nd over sylvain Gauthier, Tyler Bushey and Sheldon Hoogwerf.

In Mini Stock action the bad luck continued right away for Dylan Krikland as he slowed with a problem on lap 3 and headed to the pits. Jarod Galway would take over the top spot and was looking to end a long winless drought of his own having not won since opening day of 2017. Behind the leader Domonick Merkley Brandon Henderson Kurtis Daye and Mark Packer were all in a battle for position on the race track. Merkley was the first to clear all the traffic and made his way to the back bumper over Galway and the battle was on. With the top 2 battling for the lead Brandon Henderson was making his way towards the top 2 but had a long way to go. In the end it was finally Jarod Galway’s night as he ended the long winless drought for his first win of the season over Domonick Merkley, Brandon Henderson, Kurtis Daye and Mark Packer.

Outlaw Vintage has had some great stories in 2018 and the main story has been the resurgence in the career of Kenny Polite. The Prescott native has won 2 of the first 4 races and has been strong all year. This night was no different as he led the way early on over Corey Winters and former Vintage champion Pete Stapper. Polite had a great car but Winters was right there to challenge from 2nd and Josh Powers using a borrowed ride, was able to get to the 3rd spot and was in the thick of the battle. On lap 14 Josh Powers saw a great run end in a bad way as he lost the motor in turn 3 and 4 bringing out the yellow. On the final restart Cory Winters gave it one last shot for the win but he couldn’t make the inside lane work as Kenny Polite extended his points lead with win number 3 of the season over Winters, Matt Barbour, Wayne Riddell and Evan Reynolds.

Next week a full show is in store and Foster’s Repair will be on hand as the title sponsor with all 5 divisions on hand. The green flag will fly on the first heat race at 7pm. 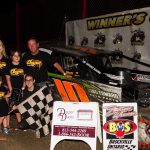 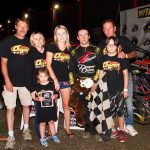 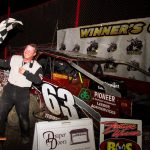 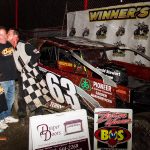 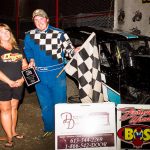 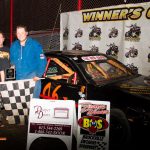 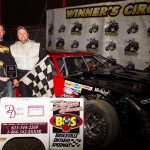