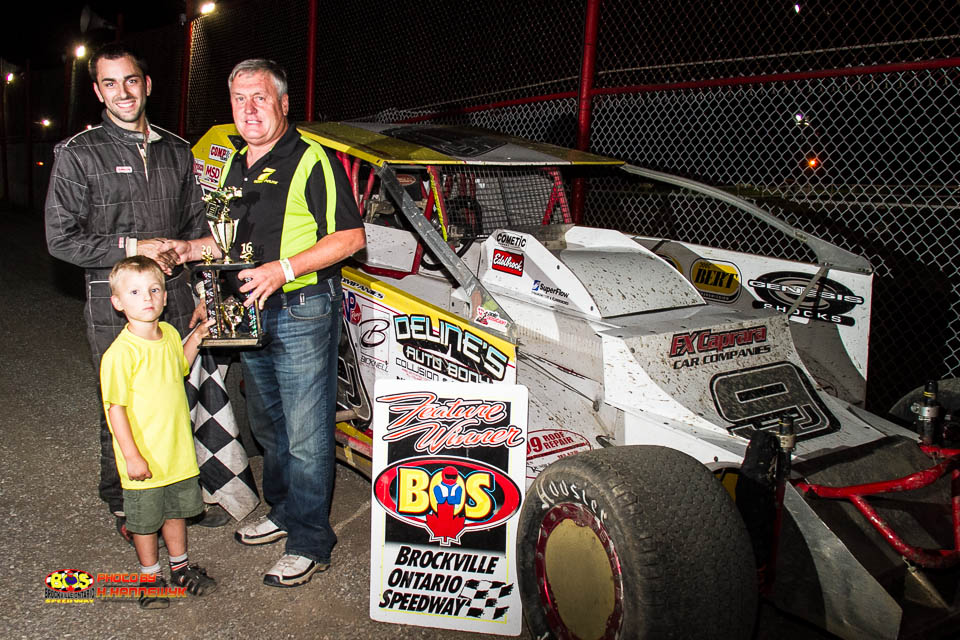 6 divisions were on hand this past Saturday night at the Brockville Ontario Speedway Bullring and the representatives from Polite Sand and Gravel were set, along with the great race fans, to witness some great racing on this night as nearly 100 cars packed the pit area.

The 358 Modifieds took to the speedway for 30 laps as Andy Lloyd and Ryan Poole led the field to green with Lloyd getting the early jump over Poole and Jeremy LaSalle. It didn’t take long for 358 Modified rookie LaSalle to jump into the race lead as he took over the top spot on lap 2 with Poole, John Mulder, Tim O’Brien and Bobby Herrington completing the top 5. LaSalle would hold the lead until lap 6 when John Mulder made heavy contact with an infield tire in turn 2 bringing out the first yellow of the night. When the green flew LaSalle continued his great run in the lead over Herrington who was making some big moves on the outside for 2nd, Jordan McCreadie, Stephane Lafrance and Gage Morin made up the top 5. On lap 10 the yellow flew again as Ryan Poole slowed on the backstretch with problems setting up another restart. When the green flew Bobby Herrington tried several attempts to get by on the high land but the low side was the fast way and LaSalle held the lead but Jordan McCreadie was on the move and charging fast. On lap 15 Joe Banks broke the front end on his number 75J and the caution flew once again. When the green came out McCreadie went right to work as he drove by Herrington for 2nd and the pressured LaSalle for the top spot. On lap 18 LaSalle’s night came to a disappointing end as he clipped an infield tire in turn 2 forcing him pit side for the night, handing the lead to Jordan McCreadie. When the green flew McCreadie was in control as he pulled away leaving Herrington, Gage Morin, Stephane Lafrance and Kyle Dingwall to battle it out in the top 5. Over the final laps Jordan McCreadie would go unchallenged as he beat a quality field for his 2nd win of the year on The Bullring. Bobby Herrington came home 2nd with Gage Morin, Stephane Lafrance and Danny O’Brien completing the top 5.

In the Sportsman 25 lap event a huge pile up on the front stretch on the initial green flag left several cars involved including points leader Shane Pecore and defending track champion Dylan Evoy. Nathan Berry received the most damaged as he was towed to the pits for the evening. When the green flew for a 2nd attempt Aaron Pugh was the man in charge as he took the lead by 4 car lengths over Jason Shipclark, Shane Stearns, Johnathon Ferguson and Jarrett Herbison. After a successful opening to the 2016 campaign the last few weeks have been plagued by mechanical problems for Pugh but he showed no signs of letting up as he held a straight away lead by lap 10 as Stearns, Shipclark ,Ferguson and Shane Pecore completed the top 5. On lap 11 Tom Roy lost the handle on his ride in turns 1 and 2 bringing out the caution. When the green flew Pugh remained the dominant force with Ferguson jumping into 2nd with Shipclark, Pecore and Stearns completing the top 5. Pugh had a great car and seemed headed to another win, but all that went away on lap 22 as Jarrett Herbison spun on lap 22 setting a 3 lap dash to the finish. On the final restart Aaron Pugh took off from the field and would drive on to score his 2nd win of 2016 over Johnathon Ferguson, Jason Shipclark, Shane Stearns and points leader Shane Pecore.

The Street Stocks had a great 15 lap event on this night as veteran Sheldon Hoogwerf was looking to turn things around after some tough luck as he took over the top spot early on over Kody Kelly, Nick Gauvreau, Keith Riddell and Earl Simpson. Hoogwerf had a great car but behind him Kelly and Riddell were right there to challenge all race long. At the halfway point it became a great 3 car battle for the win as Hoogwerf, Kelly and Riddell were all battling hard until the yellow flew for Nick Gauvreau who blew a right front tire on lap 8. On the restart Hoogwerf continued to lead but Kody Kelly was on the charge and looking for his first career win. As the laps wound down Kelly pulled even with Hoogwerf and the top 2 raced side by side for the final 3 laps. Off turn 4 heading to the checkered flag Hoogwerf would get the momentum off the top to secure his 2nd win of the year over Kelly who ran a great race to come home 2nd while Alex Gagnon, Keith Riddell and Todd Raabe completed the top 5 at the finish.

The Mini Stocks saw 2 cautions slow the event in the opening 4 laps with one of the cautions involving Bob Ray who spun in turn 3. Ray would have to restart at the back and would put on a fantastic show heading to the front. Dylan Kirkland would pace the field in the early going over Melissa Gifford, Logan Woods, Kurtis Daye and Chris Bakker. On lap 6 Chris Bakker who had struggled with mechanical issues all night long would finally get things going his way and take over the top spot with Kirkland now 2nd, Teddy Baird Woods and Colin Caswell completing the top 5. Bob Ray was flying through the field by this point, having moved into 7th on lap 8 and was on the move into the top 5 on lap 11. Kurtis Daye would have a major hit on lap 12 after heavy contact with the wall on the front stretch. Daye was able to climb out of the car under his own power and would be ok. When the green flew Bob Ray went right to work getting by Teddy Baird for 2nd and then quickly closing in on Chris Bakker for the top spot. On lap 13 Ray drove around the top side for the lead and would never look back taking his 4th win of the season over Bakker, Baird, Colin Caswell and Joe McNichols.

In Rookie Sportsman 2 big story lines highlighted the night as Pascal Racette was looking to get redemption after last week’s heart break, while Derek Cryderman on the other hand was looking to keep the roll going as he was on the charge for his 3rd straight win. Chris Ferguson was looking to spoil everyone’s party though as he took the lead at the drop of the green flag over Tyler Parker, Racette, Jacob Clancy and Derek Cryderman. Ferguson would hold the top spot until lap 7 when the first yellow flew for Jacob Clancy who made contact with an infield tire breaking the front end on his car. On the restart Ferguson held the lead but Racette was charging hard and looking for the lead. On lap 9 Racette would take over the top spot ad begin to pull away. Pascal Racette would do everything perfect over the final 6 laps and with clear race track ahead of him, it was all over with as Pascal Racette would score his first ever Rookie Sportsman win over Ferguson, Anthony Rasmussen, Derek Cryderman and Tyler Parker.

The Outlaw Vintage Modifieds were on track and ready to go for 12 laps and veteran John McNamee was in control of the field from the drop of the green over Brian Comeau and Brock Cullen. The top 3 all were right together during the entire 12 lap distance which saw only 1 caution flag on lap 9 for Wayne Riddell who spin in turn 4. On the restart John McNamee held off more challenges from Comeau and 3 time winner Pete Stapper to grab his first Outlaw Vintage win in 2016. Brian Comeau would cross in 2nd while Pete Stapper, Brock Cullen and Jason Powers completed the top 5.

Next week it’s the season finale for the Ogilvie’s Auto and Fleet Triple Crown Series for the 358 Modifieds and Sportsman along with a full show in all divisions with the first green flag dropping on the first heat at 7pm.