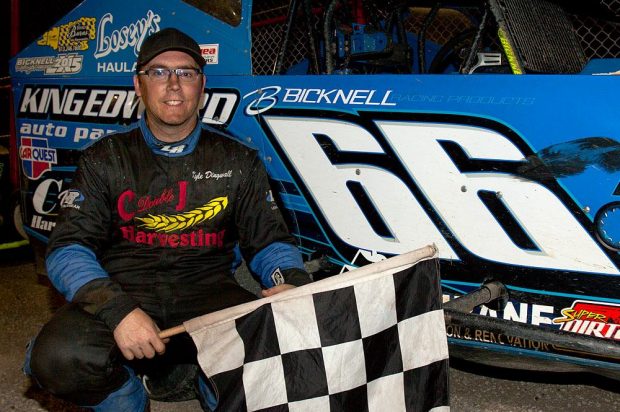 It was one for the history books this past Saturday night at the Brockville Ontario Speedway Bullring, a packed house saw 6 big features which included the final leg of the Ogilvie’s Triple Crown Series for the 358 Modified and Sportsman plus the return of the TUSA Mod Lites. Our other 3 divisions put on a fantastic show as well and to say this night was full of excitement, was pretty much correct.

The 358 Modifieds were set to conclude the final round of their Ogilvie’s Triple Crown. Joey Ladouceur and Kyle Dingwall paced the field to green with Dingwall using the outside lane to take over the lead and pull away from Ladouceur while Dale Planck, Danny O’Brien and Bobby Herrington battled it out in the top 5. In the opening 10 laps Dingwall clearly had the car to beat as he opened up a straight away advantage on the field while behind him Ladouceur, O’Brien and Planck were all in a tight battle. Planck was able to take over the 3rd spot from O’Brien on lap 15 and would close in on Ladouceur for 2nd. On lap 19 Planck once again made the top lane work as he took over 2nd from Ladouceur and was charging after the race leader. On lap 21 Matt Billings got into the front stretch wall hard bringing out the first caution of the night, he would be ok. On the restart Dingwall was able to hold the lead using the bottom while Planck tried to keep pace running the top side over Ladouceur, O’Brien and Luke Whitteker. On lap 23 another yellow flew for Stephane Lafrance as his car had heavy smoke in turn 3. On the restart Planck drove his car hard into turn 1 and was able to pull alongside Dingwall for the top spot. coming to the line for lap 24 Planck was finally in charge and was determined to get back to victory lane for the first time since the 2012 season at Brockville. On lap 29 that all changed as Planck lost control making contact with the outside wall in turn 4, handing the lead back to Dingwall. With Kyle Dingwall back out in front the battle was on for 2nd, 3rd and 4th as Planck held on but Joey Ladouceur was on the charge and eventually took away the position. Dingwall still held a strong lead but on lap 47 the caution flew for Planck who came to a stop on the back stretch. On the restart Dingwall remained in front but Danny O’Brien was charging hard and looking to get to the front. He took over 2nd on lap 50 and tried at will to catch the leader. Over the final laps Kyle Dingwall had the fastest car on the track and was not to be denied as he scored his 2nd win of the year and 1st ever Ogilvie’s Series win. Danny O’Brien settled for 2nd but was crowned the Ogilvie’s Triple Crown Series champion for a record 3rd time with Luke Whitteker, Joey Ladouceur and Jordan McCreadie completing the top 5.

The Sportsman portion of the Ogilvie’s Triple Crown was an event that people will be talking about for a long time, but more on that later. At the start of the 40 lap event Johnathon Ferguson started on the pole and went to the lead right away over Steve Barber, series point leader Dylan Evoy, Tyler Givogue and Shane Pecore. With a fast outside lane Ferguson was charging hard and driving away from the field in search of his first win of 2016. On lap 5 a 4 car tangle in turns 1 and 2 brought out the first caution of the day. On the restart Ferguson remained in control but Steve Barber was using the low lane and was able to close in on the race leader. On lap 11 Barber made the bottom work as he took over the lead from Ferguson with Evoy, Givogue and Pecore completing the top 5. A big change for the series crown occurred on lap 13 as points leader and defending champion Dylan Evoy slowed on the back stretch with mechanical issues. He would not be able to continue leaving the point title up for grabs. When the green flew Barber remained in control and was in search of his first ever series win. Behind him 2014 Ogilvie’s champion Shane Pecore was on the move as he charged to 2nd just past halfway over Ferguson, Givogue and Kyle Wilson. As the laps clicked off Pecore started to reel in the leader setting up one of the most memorable finishes in the history of the speedway. With 5 to go Barber had a great car but Shane Pecore was closing in and was within a car length for the top spot. On the final lap Pecore charged to the top side and took the lead at the white flag lap by a half car length. As they entered turn 2 both drivers made heavy contact with Pecore going off the back stretch. Barber was still able to keep going and recovered to march on to his 2nd win of the year with Tyler Givogue coming by for 2nd, Pecore was able to recover and score a 3rd place finish with Johnathon Ferguson and Ryan Scott completing the top 5.

The TUSA Mod Lite Series was ready to go racing for their 25 lap contest. Paul Klager was the man in charge as he drove out to a commanding lead in the opening laps with Jeff Sykes, Jeff May, Jim Bogett and Scott Waldrif. With the race going 17 straight green flag laps Klager was making The Bullring his own personal play ground with no one able to challenge him for the top spot. On lap 17 the caution finally flew as Deric Ellsworth, the points leader at Mohawk, and Troy Van Allen spun in turn 3. On the restart Klager was able to pull away by 4 car lengths and would drive away from the field once again. behind the leader Jeff Sykes was under pressure from Jeff May but the former Modified driver was able to fend off the challenges and remain in 2nd. In the end Paul Klager would dominate the field to score the victory over Jeff Sykes, Jeff May, Jim Bogett and Tyler Winger, who got by Scott Waldrif for 5th at the finish.

In Rookie Sportsman Nicole Austin and Dan Christiensen led the field to green in the 15 lap event. But at the completion of lap 1 it was Tyler Parker taking the top spot away from his 4th starting spot with Chris Ferguson, Austin, Matthew Barbor and Derek Cryderman completing the top 5. at the completion of lap 1 Anthony Rasmussen spun on the front stretch, Pascal Racette had no place to go and made contact which forced him pit side with right rear suspension damage. On the restart Parker remained in control but Cryderman was on the charge and looking for another win. Cryderman took over 3rd on lap 4 and 1 lap later, made a big move from 3rd to first in turn 4. With Cryderman in front Anthony Rasmussen was on the charge from the back as he made his way to 2nd with 5 laps to go but Derek Cryderman was too strong as he scored his 3rd win in the last 4 weeks at Brockville. Rasmussen came home 2nd with Jacob Clancy crossing in 3rd.

The Street Stock event saw a wild start but eventually things settled down by lap 4 of the 15 lap affair and Michael Dillon was able to take command over Nick Gauvreau points leader Alex Gagnon, Travis Andrews and Xavier Andrews. With the top 2 drivers in search of their 2nd win of the year they battled hard side by side over the next 4 laps. At the halfway point Gauvreau took over the lead as Dillon tried to keep pace in 2nd as Travis and Xavier Andrews both got around Gagnon to move into 3rd and 4th while Alex Gagnon rounded out the top 5. At the finish Nick Gauvreau was the man to beat as he drove away from a quality filled field to grab his 2nd Street Stock victory of 2016 with rookie Michael Dillon crossing in 2nd over Travis Andrews, Xavier Andrews with Brock Cullen getting by Alex Gagnon for 5th at the line.

In the Mini Stock 15 lap event Melissa Gifford took control of the field at the drop of the green flag but Chris Bakker was on the move early and was able to get by for the top spot on lap 4. Behind the leader Joe McNichols was making his 2nd start of the season and was looking to make it a good one as he hunted down the race leader just before the halfway. At halfway Bakker still held the leads as McNichols stayed close in 2nd over Quincy Roberts, Bob Ray and Teddy Baird. On lap 8 Richard Bartholomew spun off turns 3 and 4 bringing out the caution. When the green flew Bakker remained in front but former track champion Quincy Roberts was on the move as he took 2nd from McNichols and looked to reel in the leader. With 4 laps to go McNichols and Roberts made contact heading into turn 1 with Roberts spinning around, and the caution came out once again. On the final restart Bakker and McNichols put on a great battle for the lead trading it back and forth on the final lap. Heading off turn 4 Bakker held the advantage but coming to the checkers McNichols used the momentum on the outside lane to draw even and at the line would score the narrowest margin of victory in the Mini Stock division. McNichols took his first win of 2016 by 0.002 seconds over Bakker with Bob Ray, Teddy Baird and Dylan Kirkland completing the top 5.

Next week Tallman Truck Center will be on hand for another full program of racing in all 5 classes plus the 7th appearance of the season for the Outlaw Vintage Modifieds. Racing begins at 7pm.