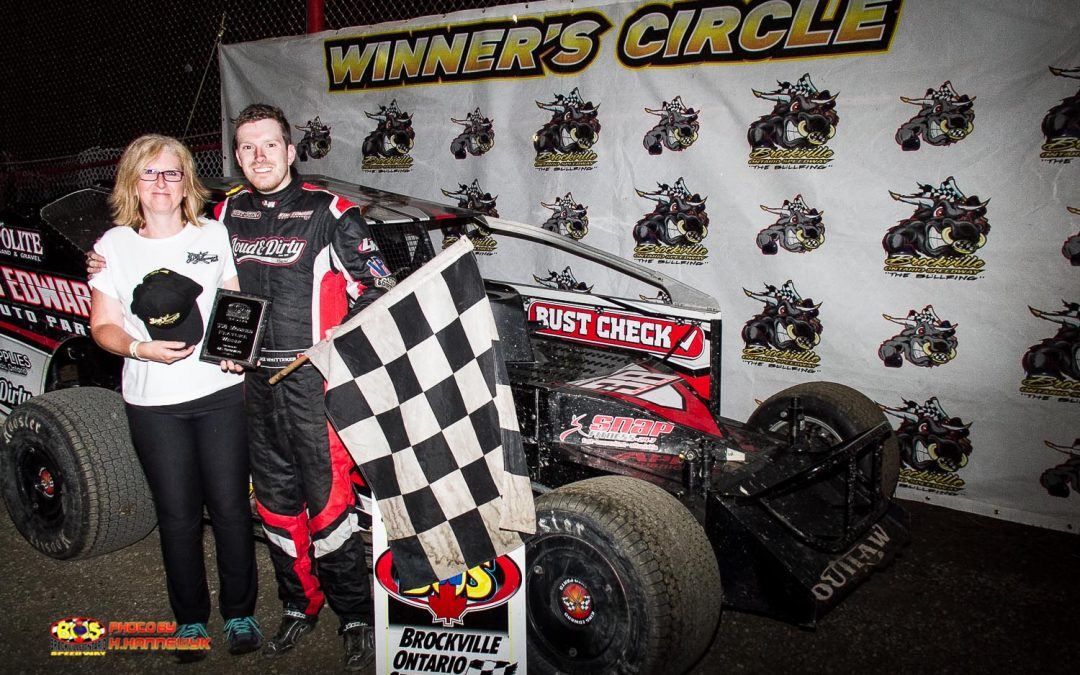 BROCKVILLE, ONT – It was another action packed night as Jim’s Performance Plus was on hand. Along with the 5 regular divisions on the card at the Brockville Ontario Speedway the Lucas Oil Empire Super Sprints joined the card for their 1 and only show of 2018 and brought a 21 car field and some great racing as well.

The Lucas Oil Empire Super Sprints made their way to the speedway for 25 fast laps. When the green flew it was Mike Mahaney jumping into the lead early on but the lead however was short lived. Before the completion of lap 1 a multi car tangle occurred forcing Chuck Hebing and Dylan Swernik upside down and in the process collected points leader Jason Barney. The race was red flagged, Hebing was able to climb from his machine get it towed pit side and make his way back out. However he would lose his drive shaft on the pace lap ending his efforts to return. Matt Tanner also suffered significant damage and was done for the night as was Dylan Swernik, who was ok after the flip but the car was done. Jason Barney returned and drove an ill handling car to an 8th place finish. When the green flew the action was fast up front as Mahaney held the lead over Steve Poirier, Coleman Gulick, Matt Billings and Paul Kinney. Since joining the Lucas Oil Empire Super Sprints on a full time basis in 2018, has had strong runs and was looking for his 2nd career win with the Doug Emery owned team but All time win leader and 7 time champion was closing fast as was Colman Gulick from position number 3. Just past halfway Mahaney entered traffic which allowed Poriier to close the gap even more. In the meantime Gulick, Billings and Kinney were locked in a battle for a top 5 spot as the laps continued to click off. With 10 to go Mahaney cleared all traffic and appeared well on his way to the win. On lap 23 Billy VanInwegen lost the handle in turn spinning off the track, and the yellow flew. On the final restart Mahaney was able to get the advantage and drive away from the field and drove on to his first win of the season over Steve Poirier who made up several points on Barney in the chase for the title, Matt Billings thrilled the locals charging by Coleman Gulick for 3rd while Shawn Donath rounded out the top 5.

In 358 Modified action Jeremy LaSalle charged to the front in the early laps over Luke Whitteker Kyle Dingwall Andy Lloyd and Chris Herbison. LaSalle had a fast race car but the caution flew on lap 1 for Steve Barber who lost the handle in turn 4. On the restart Luke Whitteker was set to take his turn at the front as he took over the lead with LaSalle, Dingwall, Lloyd and Ryan Arbuthnot charging to the number 5 spot. Once in front Whitteker put on another dominant performance much like he did a week ago as he pulled away with Kyle Dingwall getting to 2nd and tried his best to run down the leader and fellow Iroquois Ontario native. With Whitteker in full control and Dingwall 2nd Ryan Arbuthnot was also charging forward as he moved by Chris Herbison off turn 2 for 2nd. Then on lap 14 he would charge by Jeremy LaSalle to grab the number 3 spot but had work to do to catch the leaders. On lap 16 the yellow flew as Steve Bilow slowed on the speedway bringing out the yellow. On the restart Whitteker once again vaulted into the lead but Ryan Arbuthnot had a fast car as he took 2nd from Dingwall with Chris Herbison and Danny O’Brien completing the top 5 late in the going. As the laps clicked off Arbuthnot continued to close the gap and soon was on the bumper of Whitteker and the battle was on. With a great battle up front the only thing to slow the pace was a yellow, which is what happened on lap 24 as Steve Bilow’s tough night continued as he slowed in turn 1. On the final restart Whitteker jumped to the lead as Arbuthnot made an effort to get by. With the 3 to go Arnuthnot made a charge to the lead off turn 2 and pulled ahead slightly but Luke Whitteker was not to be denied as he used the bottom lane and pulled away to score his 2nd win of 2018 over Ryan Arbuthnot, Kyle Dingwall, Chris Herbison and Danny O’Brien.

Alex Gagnon was the early pace setter at the start of the 25 lap Sportsman feature over Jon Mills, Jarrett Herbison, Jesse Hudson and Xavier Andrews. A major hit in the standings occurred on lap 2 as smoke poured from Johnathon Ferguson’s race car in turn 4 ending his night and putting his title hopes in jeopardy. When the green flew Jon Mills took over the top spot from Gagnon off turn 2 bringing Jarrett Herbison to 2nd with Jesse Hudson and Shane Stearns now rounding out the top 5. Once in front Mills flexed his muscle as he drove away from the field and held a near straightaway lead over Jarrett Herbison as Jesse Hudson charged up to the top 3 over Shane Stearns and Ryan Scott who was looking to gain points after Ferguson’s misfortune. On lap 15 Jamie Young lost the handle on his race car as he spun to the infield and the yellow flew. On the restart no change in the top 5 as Mills was in complete control and was looking to return to victory lane for the first time since 2013. Jarrett Herbison had other ideas as he took to the outside and drew even with Mills and moved into the top spot on the frontstretch. Heading into turn 1 Mills drove deep into the corner and did the slider on Herbison but the younger Herbison pulled the cross over as he took the lead again off turn 2. On lap 20 Josh Kirkland spun off the speedway in turn 4 bringing out the final caution. On the final restart Jon Mills threw everything he had at Herbison, but it wasn’t meant to be as Jarrett Herbison marched on to grab his 2nd win of the year but first ever at a track that’s 10 minutes from his home in Brockville. Jon Mills crossed in 2nd with Ryan Scott making up big points with a 3rd place effort with Shane Stearns and Jesse Hudson completing the top 5.

The Street Stock ranks has been dominated this year by Tyler Bushey and Michael Dillon in 2018 as they’ve won a combined 9 races this season. Todd Raabe who has 1 win this year was looking to change those numbers just a little bit as he marched out front early on and set a torrid pace over Peter Raabe, Michael Dillon, Tyler Bushey and Kyle Massey. After a tough season Todd Raabe was on his “A” game as he drove away from the field quickly and was well on his way to his 2nd win of the season as Michael Dillon and Tyler Bushey both made their way to the top 3 and the chase was on. On lap 7 the great run for Todd Raabe ended as he slowed with a right rear flat tire on the backstretch and the yellow lights came on. When the green flew it was Tyler Bushey taking the top spot away as Michael Dillon tried to keep pace over Peter Raabe, new comer Olivier Boissonneault and Kyle Massey completing the top 5. As the laps wound down Tyler Bushey showed no signs of slowing down as he drove away from the field on this night. Much like his 2018 season has gone it was sheer domination as Tyler Bushey stormed to his 2nd in a row and 8th win of the season in Street Stock over Michael Dillon who scored his 8th runner up finish on the year over Boissonneault, Peter and Todd Raabe.

The Mini Stock divison saw the same car the won last week but a familiar face back behind the wheel as Logan Woods was looking to do what his hired gun Quincy Roberts did last week and that’s win the feature. Woods had the dominant car in the 15 lap event while 3 time winner Brandon Henderson and 4 time winner Domonick Merkley completed the top 3 drivers. Woods at one point had a full straight away lead but what allowed him to pull away was a great aide by side battle between Merkley and Henderson and Jarod Galway watched from position number 4 and began to close in. In the end of a caution free 15 lap event Logan Woods never looked back scoring his first career Mini Stock win at Brockville. Brandon Henderson, Dominick Merkley, Jarod Galway and Richard Bartholomew pulled by Mark Packer to take 5th at the checkered flag.

Xavier Perrin led early on in the 15 lap Rookie Sportsman feature but that lead would go away by lap 3 as Brock Cullen made his move for the top spot. Cullen would take over the lead over Perrin with Jonah Lewis completing the top 3. Cullen was doing what he had to do as he drove away from the field and would go unchallenged the entire way to score his 2nd win in a row and 6th of the season over Perrin with Melissa Gifford making a charge to claim 3rd at the checkered flag.

Next week a full show is in store for all 5 divisions plus its final points night for the Outlaw Vintage Modifieds. The green flag drops at 7pm. 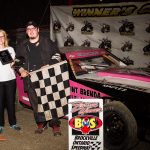 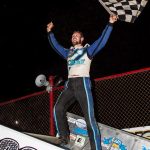 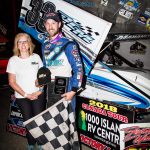 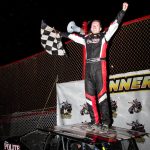 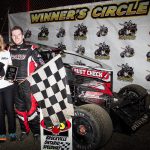 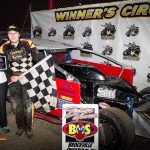 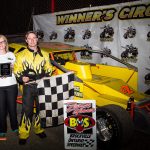 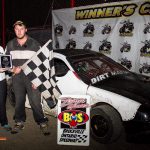