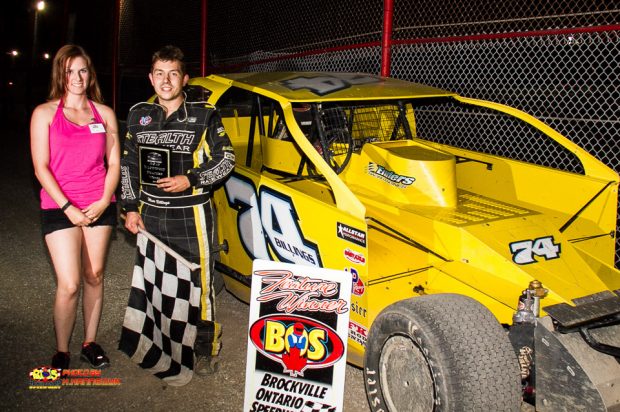 Another great crowd was on hand on another hot night at the Brockville Ontario Speedway Bullring as 6 classes were ready for action, along with the Outlaw Vintage who had a busy double header night as well.

In the first Outlaw Vintage feature Josh Powers was the dominant force as he started from the pole position. With a fast race track and everyone charging hard, Powers never faltered during the 12 lap caution free event as he charged to his 2nd win in 4 tries in the Outlaw Vintage class. veteran Wayne Riddell crossed in 2nd with Pete Stapper, Gavin Riddell and Ryan Comeau completing the top 5.

In the regular night action the 358 Modifieds had a special King of the Bullring Dash for cash sponsored by King Edward Auto Parts and Draper Doors. Stephane Lafrance started on the pole and had his way with a quality field taking the 5 lap contest in dominant fashion over Chris Herbison and Danny O’Brien.

In the 30 lap feature Joe Banks was able to jump into the top spot early on over Andy Lloyd, Jason Riddell, Madison Mulder and Jeremy LaSalle. With a fast race track Banks was able to use the top side of the speedway to his advantage as he pulled out to a big lead on the field as everyone behind him was fighting for position. On a lap 9 restart Madison Mulder was able to get the run he wanted from the bottom as he took over the top spot with Banks now having to deal with Jason Riddell as they battled for 2nd and 3rd. Near the halfway point Mulder remained in control but the driver on the move was Matt Billings who was in search of his 2nd win on the season. Billings who started back in spot number 12 was able to use the top lane to get by the leader on lap 16 and begin to put on a dominant performance. Behind the leader Mulder was doing all he could to hold off Banks, Jeremy LaSalle and Jordan McCreadie as the laps clicked off. With 10 laps to go Billings had a straightaway lead as Kyle Dingwall, Bobby Herrington and Danny O’Brien were also on the charge. Dingwall made a great 3 wide pass for 2nd bringing McCreadie to 3rd over Banks and Bobby Herrington. With no cautions over the final laps Matt Billings was untouchable as he marched to his 2nd 358 Modified win of the season over Kyle Dingwall, Jordan McCreadie, Madison Mulder and Danny O’Brien who got by Herrington at the line for 5th.

The Sportsman class also had a King of the Bullring Dash sponsored by King Edward Auto Parts and Draper Doors, Dylan Evoy started on the pole and never looked back as he recorded the win over Ryan Scott and Aaron Pugh.

The 25 lap contest saw Jarrett Herbison take the lead from the drop of the green over Zac McBride and Johnsthon Ferguson. Herbison who made the jump from the Rookie Sportsman division looked strong in the opening laps but Ferguson was on the top side and charging forward. On lap 6 Ferguson took over the lead while Herbison, McBride, Connor Dawdy and Dylan Evoy who was on the move from 9th to round out the top 5. Nearing the halfway point Ferguson was running a strong race but Ryan Scott was on the charge as he moved into the top 5 on lap 12 and was trying to run down the leaders. On lap 14 Zac McBride slowed to a stop, ending his great run in corner number 3. On the restart Ferguson once again charged to the lead with Scott making a big move to take 2nd with Herbison, Steve Barber and Dylan Evoy completing the top 5. With early night struggles Steve Barber had the fastest car on the track as he worked his way to 3rd and was on the charge for the leaders until lap 18 when he slipped off the top of turn 3, ending his shot at the win. He would return to finish 7th. On the restart Ferguson held the lead again But Evoy was on the move. The 2 time champion made his way to 2nd with 3 to go and put the pressure on Ferguson for the top spot. As they headed for the white flag Evoy used the bottom side to pull even at the flag stand which brought the fans to their feet. The top 2 raced wheel to wheel before Evoy edged out front and charged on to score his 4th win of the season over Ferguson, Ryan Scott, Shane Pecore who recovered from a broken axle early in the evening to finish 4th with Connor Dawdy crossing in 5th.

The Rookie Sportsman saw a great race as Chris Ferguson took over the lead with Pascal Racette, last week’s winner Derek Cryderman, Dan Christiensen and Tyler Parker completing the top 5. Ferguson had a strong car but Racette charged by to take over the lead and looked to have things in control. Derek Cryderman was on the move taking 2nd from Ferguson but still had a half straightaway to catch Racette. On the final lap Racette got caught up in traffic, as the field headed into turn 3 Cryderman took full advantage and charged to his 2nd win in a row over Anthony Rassmussen and Chris Ferguson.

The Street Stock 15 lap feature saw Sheldon Hoogwerf take over the top spot with Travis Andrews, Michael Dillon, Nick Gauvreau and Kody Kelly making up the top 5 early on. Hoogwerf had a great car in the opening laps but Street Stock rookie Michael Dillon took over the lead on lap 6 over Gagnon, Keith Riddell and Kody Kelly while Hoogwerf faded to 5th. On lap 8 a 5 car pileup on the front stretch saw Travis Andrews, Jason Fetterly, Steve Brady and Steve Toomey all come together with many cars suffering heavy damage. All drivers climbed out uninjured but Andrews and Hoogwerf were towed to the pits and done for the night. On the restart Dillon was doing everything he could to hold on to the lead but Alex Gagnon was hungry for a win. With 3 laps to go Gagnon made the pass that counted as he took the lead and marched on for his first win of 2016 over Dillon, Keith Riddell, Nick Gauvreau and Xavier Andrews.

The Mini Stock division always puts on a great show and on this night it was no different. Dylan Kirkland, who was in search of his first ever win, took over the top spot with John Gifford, Teddy Baird, Bob Ray and Chris Bakker chasing him. On lap 4 Kirkland’s lead went away as John Gifford took control of the field bringing Baird to 2nd with Kirkland dropping to 3rd. On lap 5 Samantha Henderson lost control of her car in turn and the caution flag flew. On the restart Gifford stayed strong in the top spot as Baird did all he could do to take it away. Over the final laps Baird and points leader Bob Ray tried everything but it wasn’t meant to be, as John Gifford drove on to his first win of the year over Baird, Ray, Chris Bakker and Colin Tracey.

The Outlaw Vintage division closed out the night with a 12 lap contest and Josh Powers had his work cut out for him as he started back in spot number 9. Pete Stapper was the man in charge as he took over the lead but was getting some pressure from Gavin Riddell. As the laps clicked off Riddell was nipping at the heels of the veteran while Josh Powers was making a big charge to come up to 3rd. On the final lap Riddell closed in and drew alongside but couldn’t pull off the pass as Pete Stapper held on to score win number 3 of the season over Gavin Riddell while Josh Power’s bid for the sweep resulted in a 3rd place finish.

Next Saturday a full card of racing is set as the good folks at Polite Sand and Gravel will be on hand along with the return of the Outlaw Vintage Modifieds. The green flag drops at 7pm.

King of the Bullring 358 Modified Dash

King of the Bullring Sportsman Dash