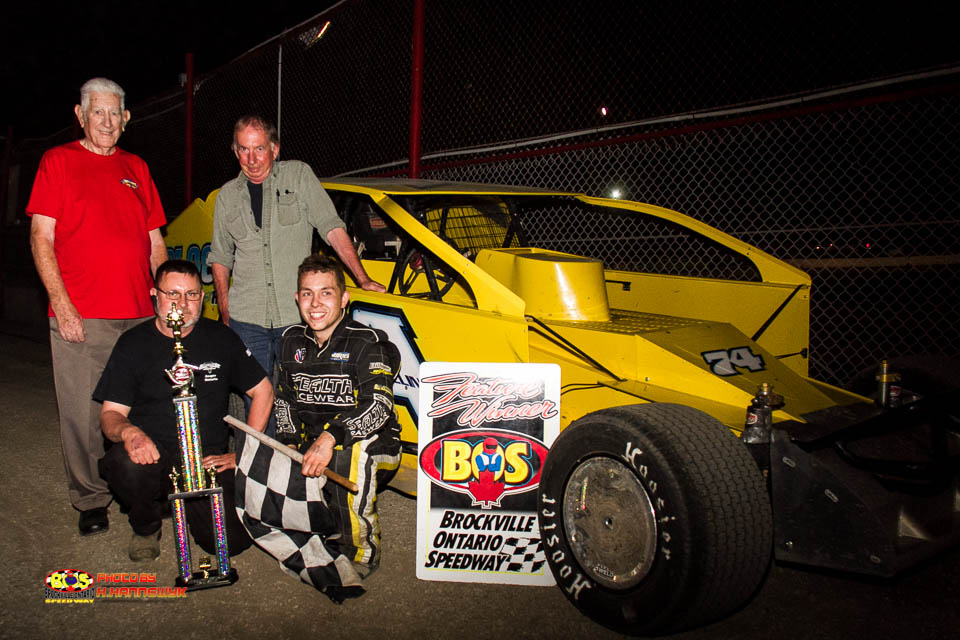 On a warm night this past Saturday night at the Brockville Ontario Speedway over 100 cars packed the pit area for the opening round of the Ogilvie’s Auto and Fleet Triple Crown Series for the 358 Modified and Sportsman divisions along some great racing slated for our Street Stocks, Mini Stocks and Rookie Sportsman.

The 358 Modifieds were ready to roll for 50 laps in the Ogilvie’s Auto and Fleet Triple Crown Series as veteran Dale Planck and Luke Whitteker brought the field of 28 starters to the green flag with Planck getting the top spot away over Whitteker, Danny O’Brien, Chris Raabe and Pat O’Brien. With only a handful of starts slated for the 2016 season “The Natural” was looking to take full advantage as he drove out to a commanding lead in the opening laps while behind the leader a great battle was on between, Whitteker and Danny O’Brien for 2nd which O’Brien would take over on lap 10, and set sail after race leader Dale Planck. Planck would enter traffic on lap 12 and despite the traffic Planck was on his game as he carefully picked his way through the lapped cars. On lap 19 the caution flew for Joey Ladouceur who slowed with a problem in turn 3. When the green flew Planck didn’t get as good of a restart which allowed Whitteker to draw along side of the leader heading into turn 1 while Danny O’Brien, Chris Raabe and Pat O’Brien still rounded out the top 5. Matt Billings was making his return to the speedway full time in nearly 3 years and after starting 13th was on his way to the front. On lap 21 Billings, Pat O’Brien and Raabe were in a 3 wide dog fight for position coming off turn 4. Billings and O’Brien made slight contact sending O’Brien to the front stretch wall which provided a massive pile up in turn 1. With Pat O’Brien stopped sideways on the track a total of 15 cars stacked up blocking the entire track in turn 1 and an extended red flag was put out to clean up the damaged cars. After one of the biggest wrecks in recent memory all drivers were able to climb out without injury and most were able to continue while Pat O’Brien and a host of others were towed to the pits with heavy damage. When the field went back under yellow Planck found himself back into the lead but would come to a stop off turn 4. Planck was pushed to the pits as his car lost power ending his shot at victory. This left Luke Whitteker in the lead, a position he took full advantage of. Whitteker pulled away by over a straightaway while last week’s winner Danny O’Brien had his hands full with Matt Billings for the number 2 spot. Billings was able to get y for position with Raabe and now Jordan McCreadie completing the top 5. On lap 44 the yellow flew for debris setting a 6 lap dash to the checkered flag. When the green flew Whitteker continued his charge but Billings was on his back bumper and looking for the lead. With 2 laps to go Billings drew beside Whitteker down the back stretch on the high side, as they came to the white flag Billings was able to clear Whitteker and pull away to score his first win since 2013 at “The BOS” and his first Ogilvie’s Series win. Whitteker settled for 2nd with Jordan McCreadie, Danny O’Brien and Chris Raabe completing the top 5.

The 40 lap Sportsman portion of the Ogilvie’s Triple Crown Series saw 2 of the top drivers in the division bring the field to the green flag. Dylan Evoy and Shane Pecore drag raced into turn 1 with Pecore getting the top spot over Tabatha Murphy, Ryan Scott and Aaron Pugh. After a major crash the night before at Mohawk, Pecore and the team worked all night to get the car repaired and it looked fast in the early going while Dylan Evoy, the defending Ogilvie’s Series champion was trying to close the gap. with 12 laps complete Pecore started to enter into lapped traffic which allowed Evoy to close in. On lap 19 Evoy made a nifty move in traffic to take over the top spot with Pecore now 2nd, Ryan Scott, Aaron Pugh and Jason Shipclark completed the top 5. With an abrasive race track Evoy was able to drive away to nearly a straightaway advantage on the rest of the field. Despite some traffic late in the race and no cautions, Shane Pecore and the rest of the field had no chance of catching Dylan Evoy who finally put the bad luck behind him to score his first win of the season at Brockville in a race that took only 12 minutes to complete. Pecore scored his 2nd straight runner up finish while Scott, Pugh and Shipclark completed the top 5 drivers.

In Rookie Sportsman karting graduate Jacob Clancy took the lead early on with Derek Cryderman and Chris Zieren completing the top 3. Clancy had a fast car early on but veteran Street Stock Driver Derek Cryderman was closing in to challenge. On lap 8 Cryderman briefly took over the lead but made the 2 drivers made contact off turn 2 sending both drivers spinning out but the green would stay out as both drivers kept going. On lap 10 the caution flew which saw Chris Zieren take over the lead with Jarrett Herbison now 2nd. When the green flew Zieren took over command and was looking for redemption after a heartbreaking loss in Cornwall 1 week ago. Zieren would lead the final 5 laps and score his first career win on dirt with Herbison coming from 10th to finish 2nd while Derek Cryderman rebounded to finish 3rd. Mike Evans and Tyler Parker completed the top 5.

23 drivers were ready to roll in the 15 lap Street Stock feature with Xavier Andrews taking away the race lead over Brock Cullen and Tyler Bushey. Andrews who won 5 times last year, all in dramatic fashion, was in command of the race but Brock Cullen was right there to challenge throughout the 15 lap event. Behind the top 2 Alex Gagnon and Nick Gauvreau were having a spirited battle for a top 5 position with Tyler Bushey. Both Gagnon and Gauvreau were able to get by Bushey and tried to run down the top 2 drivers. After leading a total of 9 laps in his 5 victories a year ago Xavier Andrews led all 15 laps on this night score his first win of the year, with Brock Cullen, Nick Gauvreau, Alex Gagnon and Travis Andrews.

20 cars took to the speedway in the 15 lap Mini Stock feature with Dustin Bode and Chris Bakker leading the field to green. Bakker would move into the top spot early on while Teddy Baird followed him moving from 4th to 2nd. Bakker and Baird both were the class of the field as they pulled away from the field while Dustin Bode, Colin Tracey and Bob Ray battled for a top 5 spot. Teddy Baird has been close to winning his first ever feature and was poised to take care of that as he took over the race lead on lap 8. With a late race restart and Chris Bakker right there to challenge, Teddy Baird held off all challengers and after 3 years of trying finally put himself into victory lane. Bakker came home 2nd with Bob Ray 3rd followed by last week’s winner Quincy Roberts and defending track champion Jamie Truelove.

Next week Ontario Rental Supply will be on hand for a full program in all 5 classes plus the 2nd appearance of the season for the Outlaw Vintage Modifieds. Racing action begins at 7pm.