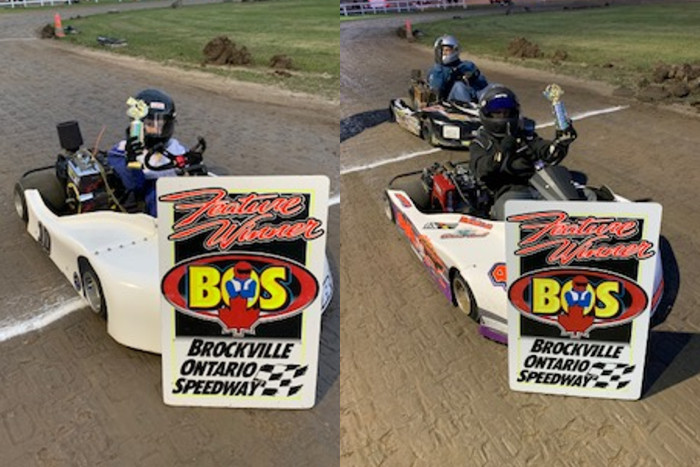 For the second straight week the Brockville Ontario Speedway saw a stellar field of karts this past Friday night with four drivers repeating in their respective divisions and two drivers getting their first wins of 2020.

In the Box Stock 10 lap event Colby Crawford jumped into the early lead with Max Kiel giving chase from 2nd and Jace Menard 3rd. Crawford and Kiel staged a battle for the lead through the first 7 laps until Keil lost control of his machine taking a hard hit into the turn 4 wall, and the red flag was displayed. St. John Ambulance crews attended to Keil who was shaken up and taken for further evaluation, but would be ok. On the restart Crawford would run away for the win, his 2nd straight on the season.

One of the biggest fields on the night was the Rookie division and Landen Menard was the class of the field during the 15-lap event. He took the lead from the outside pole and although Brock Beattie gave him a challenge in the opening laps, Menard was not phased. Beattie would see a shot at victory go away as he spun in turn 4. Menard would pull away from Dylan Moore in the final laps to score the win, while last week’s runner up Elliott Stacey would be the biggest mover on the night, charging from 8th to 3rd at the checkers.

The Jr. Restricted division turned into the Brennan Moore charity classic on this night. Moore started on the pole and went untouched through the entire 15 lap distance to claim back to back wins. Maddie Wallace posted a solid run with Marc Oliver McCarthy crossing in 3rd.

Jr. Clone saw a fantastic battle all race long…. for 2nd place. Blake Smith jumped into the lead from the drop of the green flag and put his machine on auto pilot the rest of the night. Behind him an amazing battle for position saw Brandon Lazore Jr., Jackson VanAllen, Brycen Thompson and Liam Ladouceur stage an amazing battle for position, swapping spots several times over the 15-lap event. Lazore held the bottom and the only was to get by was the high lane, which many had trouble hooking up to. At the checkered flag Blake Smith had a great look at the battle as he cruised to his 2nd win in a row by nearly a full lap. Brandon Lazore held off a tough field in the battle for 2nd with Liam Ladouceur making a big move late to go from 5th to third at the line.

Senior Clone saw Jordan Wood take the lead at the drop of the green flag with Brennan Moore following him to second. Moore’s bid at two wins in one night ended early with mechanical issues, forcing him pit side for the night. When racing resumed, Wood was the driver to beat but behind him a great battle was underway as Liam Ladouceur made a big move early to charge into 2nd, but still had work to do to catch the leader. In the end it was a dominant victory for Jordan Wood, who won for the 2nd straight week over Liam Ladouceur and Ayden Van De Light, who came from the outside of the last row to round out the podium.

,
In the exciting Stock Heavy 20 lap event Brad Gipson was the driver to beat as he held a slight lead but Randy Revelle was on his tail and looking for the top spot. Last week’s winner Tim Bailey spun his machine in turn 4 bringing out the yellow. He would be heard from later in the night. On the restart Gipson remained in control but Revelle was on the charge. The former Stock Heavy champion got a great run down the back stretch and pulled even with Gipson but heavy contact forced Revelle into the infield. Gipson was placed at the back of the field for rough driving on the ensuing restart. This left last week’s runner up Eric Dinelle in the lead with a very stout machine. Dinelle would remain in control and although Mark Bailey, who charged to the 2nd spot, made a slight challenge for the lead, would not get close enough in the end. After a runner up finish last week, Eric Dinelle would cruise to the win over Mark Bailey and Tim Bailey would recover from that early race spin wo finish 2nd.

Next week action resumes on the kart track at The BOS for a full program in all divisions. No fan attendance is permitted for any on track action at the present time but staff and management are hoping for this to happen very soon. In the meantime, to keep up with what is happening at the Speedway, stay tuned to brockvillespeedway.com and our Twitter and Facebook page. 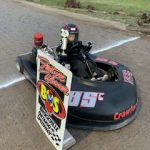 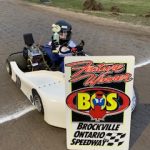 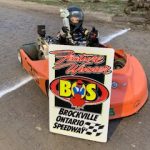 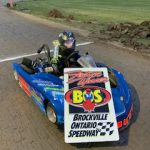 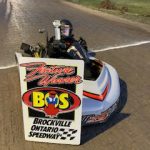 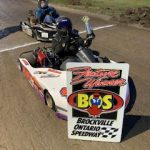