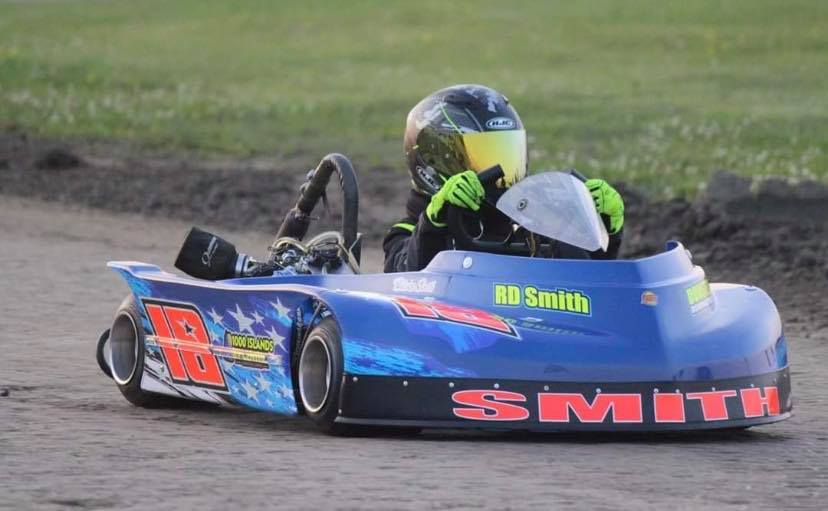 One week after the first major heat event of 2020 put a stop to the racing action on the kart track at The BOS, drivers were heating it up once again on Friday night on a very smooth surface. Familiar faces went back to victory lane with some continuing their season of dominance.

The Box Stock 10 lap feature saw Colby Crawford waste no time taking the lead at the drop of the green flag over Jace Menard and Colbie Flaro. Crawford was the dominant force all race long but Menard raced hard to keep pace with the leader in the opening laps. At the checkered flag Colby Crawford had well over a straight away lead taking his 5th win of 2020 over Menard and Flaro.

The Rookie feature had another exciting finish as Avery Raabe took command of the field in the early laps with Landen Menard, Nolan Chatten and Elliott Stacey giving chase as they put on a great battle for position. Raabe looked to have things well in hand through the majority of the 15-lap event until a lap 10 caution brought Stacey and Chatten to his back bumper. On the restart Raabe stayed committed to the inside lane as Stacey and Chatten continued their fight for 2nd. With two laps to go Brock Beattie lost the handle setting up a green, white checkered finish. When starter Matt Billings threw the green flag Raabe continued to lead but Elliott Stacey had one more trick up his sleeve. At the white flag Stacey went where nobody would go, to the outside. This proved to be the winning move as Elliott Stacey would clear Raabe in turn three and march to his 2nd win of the season. Raabe came home 2nd with Nolan Chatten crossing 3rd.

In Jr. Restricted Brennan Moore has been the driver to beat week in and week out and this night was no different. Moore would flex his muscle early on in the 12-lap contest as he took the lead from early pace setter Maddie Wallace heading into turn one. From there Brennan Moore would go unchallenged once again taking his 6th win in as many weeks over Wallace and Maude McCarthy.

The 15 lap Jr. Clone feature was on track and ready to go and Chris Lough, who is the only other winner in the division, was back and running strong as he took the lead at the drop of the green over Brycen Thompson and Blake Smith. Lough had one of the fastest karts on track but Blake Smith was starting to gain momentum. Just past half way Smith was able to take over second, but still had a straight away to run down the race leader. Lough would hold the lead but with 5 laps to go Smith had made up the difference and made his move for the top spot. With three to go Smith made the move and marched on for his 5th checkered flag in 6 events. Lough settled for 2nd with Brycen Thompson crossing in 3rd.

Ayden Van De Ligt took the top spot at the start of the 15 lap Sr. Clone event as he took the lead at the drop of the green flag. The lead was short lived as Brennan Moore used a three-wide move off turn two to grab the lead and was looking to once again win twice in one night. Van De Ligt was not about to let Moore get away as he took the lead back just before half way. Moore, who was determined as ever to the top spot, used the cross over move off turn two to grab the lead once again. Behind the leaders Tristan Ladouceur and Jordan Wood had their struggles spinning early on and both would make it into the top 5 quickly. Jordan Wood closed in on the lead battle with Moore and Van De Ligt but the laps were running out. Over the final circuits Brennan Moore was able to pull out to a comfortable 4 kart length lead and hold it the rest of the way for his 2nd win in a row in Sr. Clone and 2nd straight sweep of the night having won Jr. Restricted earlier. Jordan Wood made his way to 2nd at the line with Ayden Van De Ligt finishing a strong third.

The Stock Heavy division closed out the night with a 20-lap event and opening day winner Tim Bailey would grab the lead at the drop of the green flag over Matt Bond and Randy Revelle. Bailey would show how quick he was at the start of the event as he drove away from the field in the early laps as behind him, Randy Revelle had made his way to second but had a lot of ground to cover in order to catch the leader. The first yellow of the night flew on lap 9 as 5th place running Matt Bond would spin in turn two. On the restart Bailey and Revelle would continue to lead the way but Eric Dinelle was on the move from his 6th starting spot and quickly moved to 2nd around Revelle. Dinelle would then charge after Tim Bailey, and the battle was on. Over the final laps and after two late yellow flags, Tim Bailey was able to fend off repeated challenges from Eric Dinelle and Ryan Lambert, who started 10th on the grid, to claim his 2nd win of 2020. Dinelle settled for 2nd with Ryan Lambert coming from last to finish 3rd.

We will be set to do it all over again next Friday night on the kart track at the Brockville Ontario Speedway with a full card of racing at 7pm. For up to date points, results and information, stay tuned to our website at brockvillespeedway.com and be sure to follow us on Facebook, Twitter and Instagram.