RACING RETURNS TO THE BOS IN 2020 WITH KARTS TAKING CENTER STAGE! 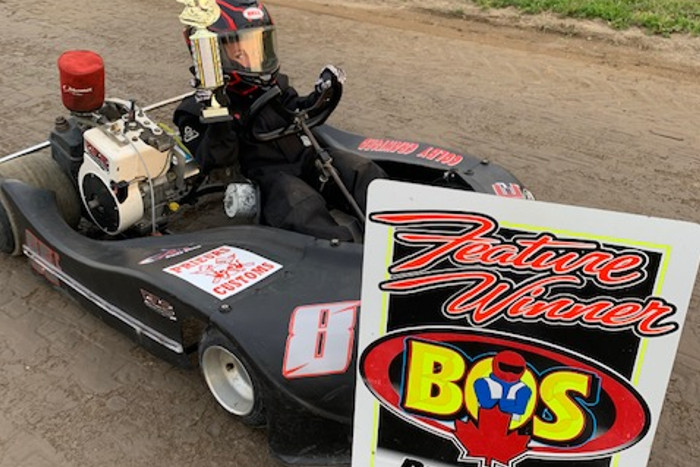 With things changing drastically over the last several months, racing may not have been on anyone’s radar. Over the past couple of weeks, tracks across Ontario were given permission to hold events, with new regulations, aimed at helping to mitigate health risks to the public. With that in mind, it was time to return to racing!

With social distancing and masks in place, the pits looked different. The action on the track, was the same as always!

Kicking off the first feature of the season, was the Box Stock division. Colby Crawford, led the field to the green and took an early lead. Crawford was smooth and seeming en route to an easy win. Adrianna Winters had other ideas. Chasing Crawford down late in the race, it looked as if she might take over the top spot, until clipping an implement tire on lap 10. Having dropped back from the leader, Winters would again chase him down, but ultimately settle for second to a consistent and fast Crawford, who would take home the first checkered flag of 2020!

The Rookie Division would be up next and Bryson Winters would start from the pole position. But it would be “The Hot Shoe”, Brock Beattie taking the early lead in this race. Not to be denied, Winters would fight back and take over the lead on lap two. Winters and Beattie would run that way until a late caution would bunch the field up with four laps remaining. Winters, would lead as the green came back and go on to take the win ahead of a fevered last lap battle for the runner-up spot that would be decided at the line with Elliott Stacey coming from the number five starting spot to edge out Brock Beattie!

Nolan Chatten’s 22 looked to be strong heading into Jr. Sportsman. Starting from the pole, he would lead early, receiving plenty of pressure from Dylan Moore and Ryan Greig. The three were evenly matched in the early stages and would fight hard for the top spot! On lap seven, Moore would finally wrestle the lead from Chatten and put some distance between himself and the ongoing fight for second. Eventually, Greig would work to get by for the number two position. Moore would go on to cross the finish line ahead of Greig and Chatten!

Jr. restricted would be next up for feature action and it was all about Moore, once again! This time, it was Brennan, who would start from the number one spot and go on to dominate! the 35B would lead every lap and take the checkers by 3/4 of a lap ahead of second place Marco McCarthy and third place runner,
Maddie Wallace.

Brandon Lazore and Chris Lough would share the front row for the Jr. Clone main event. Lazore would take the early lead with Lough right there challenging. As the two worked corners 3 and 4 for the lead, they would get together in front of the field, to bring out the caution on lap two. Blake Smith would inherit the lead for the restart and continue to carry the top spot. A lap six yellow for the Brycen Thompson ride would close the field up again. But Smith was not to be denied and would go on to take the first win of the year ahead of a surging Lough and Jackson Van Allen!

In Sr. Clone action, Tristan Ladouceur, took the initial lead in his first ever start at the BOS. Jordan Wood, fought to the top spot off of turn 2 on the second lap. A lap six caution would see the field bunched up again. What seemed like a two-way battle for first was shaping up to change. Coming from the 10 starting spot, Graysen Reddick was committed to the top side, working two and three wide, the youngster willed his way to the number three spot before a lap 10 yellow would fly. Surely, this was about to be a three kart battle for the win. With the one-to-go signal given before resuming racing, Reddick’s hard charge was halted.
the kart would stall in turn 2, requiring him to restart and fire from the back once again. This left Wood and Ladouceur to decide the feature between the two of them. Wood and Ladouceur would go on to finish 1-2, while the rest of the field was embroiled in a heated battle for third, with the spot eventually going to Marco
McCarthy!

With a great show nearly in the books, the Stock division had some big shoes to fill in terms of exciting finishes. They would not let us down! Eric Dinelle and Ryan Lambert had the front row for the start and Dinelle would jump to the early lead! Behind him, the action was furious, as fourth place starter, Brad Gipson, ould go three wide off turn four to take over second place, by the end of lap one. Dinelle, would go on to take what seemed to be a comfortable lead, while the battle for runner-up continued. Tim Bailey would work hard to get past Gipson for second. His sights were set on the top spot. But with a sizeable lead and laps winding down, Dinelle appeared untouchable. Bailey, driving hard, was chasing down the leader and with less than three laps to go, he had made up significant ground. The pair approached lapped traffic, as starter, Matt Billings, signalled two laps to go! This would be the deciding factor, both drivers had to decide what would best work for them. with lapped kart in front on the last lap, this would be the deciding factor. working off turn 2 and down the backstretch, bailey gambled as Dinelle worked to the inside of the lapped machine. Bailey’s gamble? Go inside both of them, three wide into turn three! Coming off turn four with checkers waving, Bailey would lead 1/4 lap to take home the win over a dominant Dinelle!