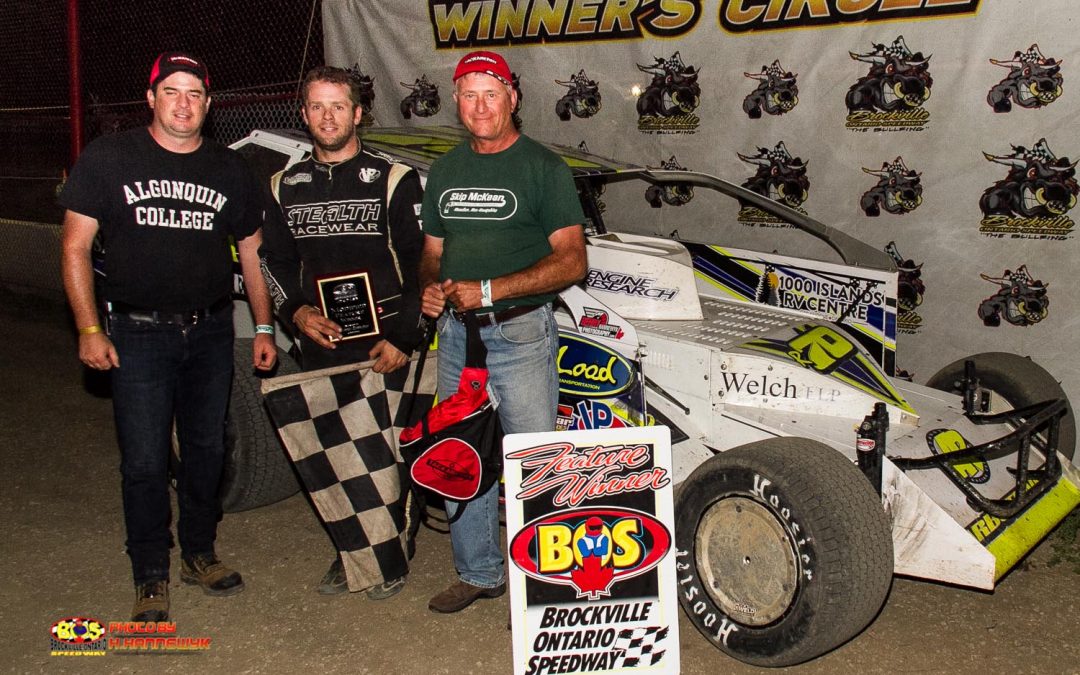 BROCKVILLE, ONT – It was another night of action packed racing as 6 big classes took to the speedway and were fans got up close and personal with the drivers on Tackaberry Construction night. Drivers took time to sign many autographs on the front stretch, but once that was over, it was back to business as usual.

The Patriot Sprint Tour was making its first appearance of the season and Dylan Westbrook drew the pole position and lead the way early on over Chuck Hebing, Jason Barney, Steve Hutsheson Jr. and Steve Poirier. Westbrook was running strong but they call the man behind him The Cobra for a reason as he took over the top spot with ease on lap 5 and began to stretch out his advantage over the rest of the field. Behind the leader Westbrook was doing everything in his power battling with Jason Barney to hold on to position number 2 but Barney was too strong as he took over the spot on lap 11 and started to run down the leader. He would have an easy time doing that as Cory Turner would slide off turn 3 bringing out the first yellow. On the restart Hebing pulled out to the lead but Barney stayed right on his tail and made several attempts to get by but Hebing stayed in control with Westbrook, Steve Poirier and Steve Hutcheson completing the top 5. The leaders entered traffic with 10 laps to go and the battle was on for the win. Barney made a big move to the inside of Chuck Hebing in turn 3 using the bottom lane and the 2 drivers made slight contact as Hebing was able to get away. In the final laps Chuck Hebing was on rails and pulled away to score his 5th win of the season, 47th of his career and first ever win at Brockville with the Patriot Sprint Tour. Jason Barney scored another top 5 claiming 2nd while Steve Poirier made his way to 3rd with Dylan Westbrook and Steve Hutcheson completing the top 5.

Danny O’Brien was looking to extend his winning streak to 4 in a row in 358 Modified action and 5th of the year but starting 13th on the night was not making his night an easy one by far. Luke Stewart would take the early lead over Joe Banks, Tim O’Brien Ryan Poole and Chris Herbison. The Sydenham Ontario native would hold the top spot against a quality filled file as Tim O’Brien was making some big moves early on as he moved to 2nd using the top lane and quickly set sail after race leader Luke Stewart. Andy Lloyd sailed off turn 3 to bring out the first yellow but that was mild compared to what would happen on the next restart. When the green flew Stewart and Tim O’Brien would drive away but behind them Ryan Poole and Chris Herbison got hooked together battling for 3rd and 4th sending the field scattering behind them. Amazingly nobody hit either driver but both would have to restart from the back of the field. On the restart it was a battle again between Stewart and Tim O’Brien as Ryan Arbuthnot was making his presence known taking the 3rd spot by lap 13 and was playing the patience game on a track that had very little grip. By lap 18 it was a 3 car break away but Ryan Arbuthnot was still moving forward taking 2nd from Tim O’Brien and immediately went after Luke Stewart from the lead while Kyle Dingwall and Luke Whitteker completed the top 5. On lap 24 Arbuthnot would make the move of the night charging on the top lane and take over the lead as he changed lanes to get by a slower car heading into turn 1 and start to pull away from Luke Stewart with Kyle Dingwall taking 3rd from Tim O’Brien. Danny O’Brien’s bid for 4 in a row was in serious jeopardy as he would make it to the 45th spot around Luke Whitteker and then challenge younger brother Tim for 4th. In the end Ryan Arbuthnot would march on to his 2nd win of the year and first since June 2nd. Luke Stewart ran a flawless race to come home 2nd while Kyle Dingwall, Danny and Tim O’Brien would complete the top 5.

Tyler Reynolds was the big story in the opening laps of the 25 laps Sportsman feature as he led the way early on over Dale Gifford, Jason Shipclark, Gabe Cyr and Xavier Andrews. The caution would quickly come out before the completion of lap 1 for Tristan Draper who was forced into an infield tire in turn 2 causing heavy suspension damage to his machine. Reynolds had a quick race car on the restart and was able to get away by a half straightaway and was looking I great shape to claim his first ever Sportsman win. After the opening 9 laps went by smoothly the first caution flew as Johnathon Ferguson spun his car in turn 2. He would rebound for a 6th place finish at the checkers. Meanwhile Tyler Reynolds had a great night going but on the restart him and Jason Shipclark would make contact causing Shipclark to hit the wall causing him to bounce back into Reynolds in turn 1 which sent the field scattering and the caution would fly. Tyler Reynolds suffered heavy damage and would end his night on the tow truck while Jason Shipclark would suffer heavy suspension damage and would retire to the pits as well. This left Gabe Cyr in control on lap 9 when the green came back out but Ryan Scott out of Kingston was up to the task as he charged by the Cornwall native for the lead and begin to turn in a dominating performance. Behind the leader Gabe Cyr and Jon Mills would engage in a great battle for 2nd while Jarrett Herbison was doing all he could to hold on to 4th as Xavier Andrews worked on him from the number 5 spot. Just past halfway Ryan Scott was literally in a league of his own as he held a comfortable advantage over the rest of the field which saw the inside lane become the place to be through the remainder of the event as Cyr and Mills continued their fight for 2nd with Herbison and now Jesse Hudson making a big move to crack the top 5 with just 7 laps to go. It was a perfect night for Ryan Scott and his team as he cruised to his 3rd win of 2018. Gabe Cyr held off Jon Mills for 2nd with Jarrett Herbison and Jesse Hudson completing the top 5.

Street Stocks were the talk of the town on this night as Todd Raabe led early on over Michael Dillon, Sheldon Hoogwerf, Kyle Massey and Tyler Bushey. Raabe had a strong race car in the early laps and held Dillon at bay for the lead but the caution would fly at the completion of lap 5 for Taylor Andrews as she spun off turn 2. On the restart Michael Dillon would take command of the field while Tyler Bushey took over the 2nd spot and would engage in a race that has everyone talking after Saturday night. Both Dillon and Bushey put on a spirited battle for the top spot with neither driver giving an inch on the race track as Keith Riddell was making some late moves taking the 3rd spot from Raabe with Sheldon Hoogwerf completing the top 5. On the final lap Michael Dillon looked to have the lead secure but Tyler Bushey made a big move heading into turn 3 on the inside and Dillon slipped up to the middle of the racing groove. As they raced to the checkered flag the 2 drivers made contact to the line and by inches Tyler Bushey would score his 6th win of the 2018 in Street Stock. Michael Dillon would take his 5th 2nd place of the season over Keith Riddell, Todd Raabe and Kyle Massey.

In the 15 lap Rookie Sportsman feature it was little more tame pace as Michel Fournier rocketed to the lead at the drop of the green flag over Gavin Riddell, Brock Cullen, Xavier Perrin and Jonah Lewis. Fournier would have the strongest car on this night as he drove away from the field with no problem but behind him the battle was on in the top 5. Brock Cullen would go to work for 2nd on Gavin Riddell but the Cardinal native would hold the 2nd spot ut Xavier Perrin was also on the move as he closed in on Cullen for 3rd at the halfway point. With 5 laps remaining Fournier was in complete control and showed no signs of letting up as Riddell did all he could to run him down for 2nd While Xavier Perrin scooted by Cullen for 3rd bringing Jonah Lewis with him to 4th with Brock Cullen completing the top 5. In a deal that came together hours before the opening day green flag, Michel Fournier made the hard work pay off as he scored his first ever Rookie Sportsman feature win at Brockville. Gavin Riddell, Xavier Perrin, Jonah Lewis and Brock Cullen would finish out the top 5.

The Mini Stock ranks got off to a slow start for Dylan Kirkland as he slowed on the back stretch but would return to start from the tail of the field and begin a charge to the front. Brandon Henderson and Domoinick Merkley have had great cars all season and would be the class of the field running 1st and 2nd through a good portion of the night over Jarod Galway, Kurtis Daye and Tyson Slinger. With the top 2 in front and having a great side by side battle which saw neither get any advantage Galway and Sling would engage in their own fight for position as Dylan Kirkland would be on the move charging to 5th by halfway. Up front Henderson was finally able to clear Merkley down the front stretch but Merkley was still on his back bumper and looking to take the lead. Over the final laps Henderson looked to have a stronger piece and would surge ahead of Merkley to score his 3rd win of the season in Mini Stock. Domonick Merkley continued a great season finishing 2nd while Dylan Kirkland rebounded to go from 12th to 3rd with Cornwall regular Justin Jodin coming from 8th to 4th while Jarod Galway completed the top 5.

Next week it’s the popular Hall of Fame induction ceremony along with a full show in all 5 classes plus the return of the Outlaw Vintage Modifieds with Draper Doors on hand as the evenings sponsor. Racing gets underway at 7:30pm, for more information and updated points, results and anything that’s going on at the speedway. Check out brockvillespeedway.com or follow us on Facebook and Twitter. 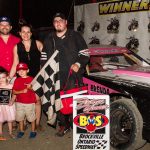 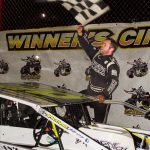 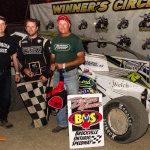 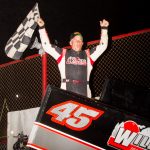 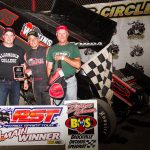 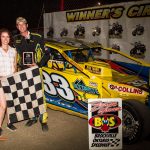 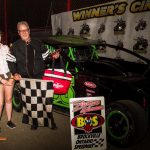 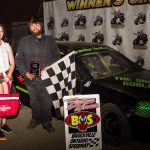