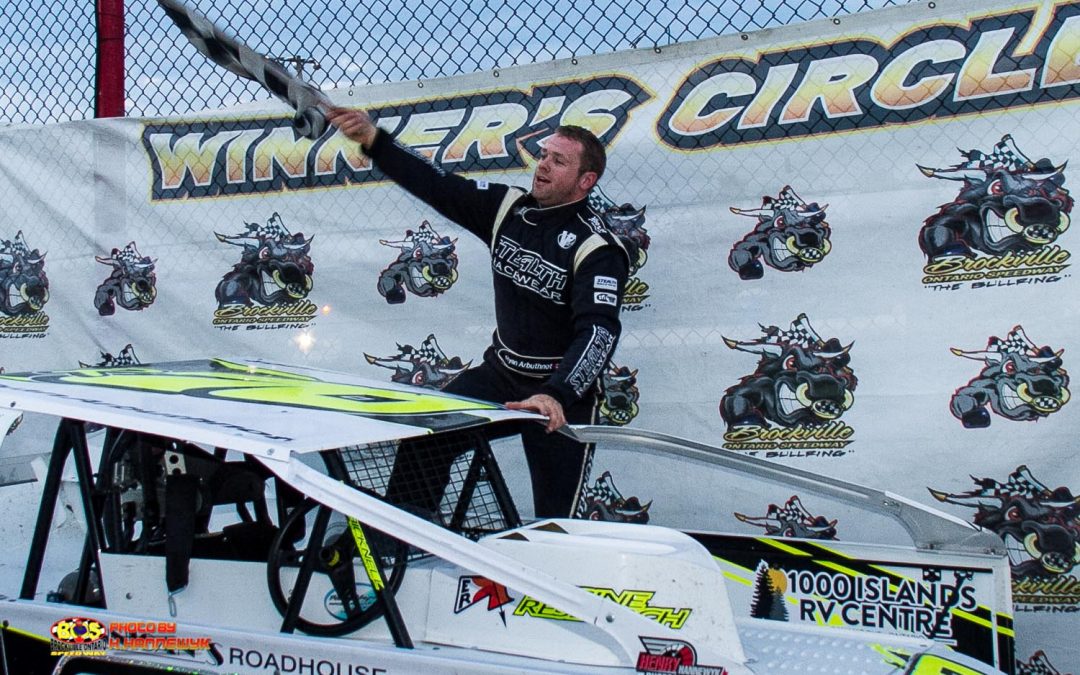 BROCKVILLE, ON – With a bit of weather around the area the action did not stop the drivers at thee Brockville Ontario Speedway this past Saturday night as 5 divisions were on hand with Jim’s Performance Plus as title sponsor and a great crowd.

In the 1000 Islands RV 358 Modified 30 laps feature things began not so good for Aaron Pugh and Steve Barber. The two drivers made contact in turn 1 sending them off turns 1 and 2, and the caution was out. On the restart it was Ryan Poole collecting the race lead with Andy Lloyd, Lee Ladouceur, Luke Stewart and Ryan Arbuthnot completing the top 5. Poole started to open up a slight lead on the field and was looking to finally get to victory lane. Ryan Arbuthnot would have something to say about this quickly as he charged to the top 5 early from his 9th starting spot. Arbuthnot had the fastest car on track and was able to grab 2nd from Lee Ladouceur on lap 9 then reeled in the leader. At the completion of lap 10 Arbuthnot used the top side of the speedway to claim the lead and started his dominant performance. Behind the leader Ryan Poole was in a battle for 2nd with Kyle Dingwall, a battle which Dingwall would win by the halfway point while Lee Ladouceur and Tim Fuller completed the top 5. Without the help of a yellow flag over the final laps Ryan Arbuthnot was showing everyone that he was in a class of his own on this night, not even lapped cars were stopping him. With 5 laps to go Arbuthnot held a straight away lead over Dingwall and Ladouceur and would not be denied. Ryan Arbuthnot would cruise to his 4th win in six tries in 2019 at Brockville. Kyle Dingwall would cross the line in 2nd with Lee Ladouceur holding off Tim Fuller for 3rd while Ryan Poole had his best finish of the season crossing in 5th.

Last week the Sportsman division saw a brand-new winner and the chances were pretty good this week as Dale Gifford took the lead at the start of the 25-lap event. Gifford led the opening circuit but slipped off the track in turn 2 allowing Jonah Lewis to take over the lead as the yellow flew. On the restart Lewis was able to continue leading the way over Jon Mills, Jarrett Herbison, Tyler Reynolds and Dan Ferguson. Multiple racing lanes allowed drivers to search around the speedway to find the best line and Lewis had the bottom working great, but so did Jon Mills. The top two drivers had a spirited battle for the lead with sophomore driver Lewis keeping his cool as Mills was right there to challenge lap after lap with Jarrett Herbison, Tyler Reynolds and Ryan Scott filling out the top 5 on lap 17. Ryan Scott knew it was time to get going as he took the 4th spot from Tyler Reynolds and quickly closed in on Herbison for third. The top two were having issues navigating traffic which allowed both Herbison and Scott to close in. A caution flew on lap 18 for Alex Gagnon who lost the handle on his car in turn two. Three more restarts would take place over the next four laps which allowed Ryan Scott to make the moves to the runner up spot as the field was set for green with three laps remaining. When the green flew Jonah Lewis continued his incredible run as Ryan Scott charged to the high lane. On lap 24 coming to the white flag Scott would make the pass for the lead as they raced into turn one with Lewis now giving chase from 2nd and Jon Mills close by in third. Ryan Scott would hold off a late charge and drive on to score his 4th win in six events in the Sportsman division at Brockville. Jonah Lewis’ bid for his first win resulted in a 2nd place effort over Jon Mills, Xavier Andrews and Jarrett Herbison.

The Draper Doors Rookie Sportsman feature had a fantastic finish but the start of the 15-lap event looked like Kalen Draper was going to drive off into the sunset to an easy win as he led the way over Justin Saunders and Dylan Kirkland. With Draper well in command Dylan Kirkland was on the move as he took over position number two from Saunders. As the laps clicked off Kalen Draper was inching closer to his first ever win but Dylan Kirkland was slowly closing the gap. With one lap remaining Dylan Kirkland was able to pull even with Draper and the top two raced side by side into turn three. As they raced to the checkered both drivers crossed the line nearly even and timing and scoring would determine the winner. By 0.007 seconds Dylan Kirkland would claim his first Rookie Sportsman win of the season in an incredible finish. Kalen Draper would settle for 2nd over Terry McClelland, Justin Saunders and Tyler Stewart.

Street Stocks provided thrilling racing and unpredictable events that would make this race one for the memory book. Todd Raabe would lead the opening three laps but as the caution flew for Pierre Hebert and Jessica Pasinetti in turn 4, Raabe would head pit side. His night was far from done, more on him later. Bruno Richard would charge to the front on lap 5 of the 15-lap event over Michael Dillon and Tyler Bushey. As Richard tried to drive away from the field Dillon and Bushey were close by along with Peter Raabe, who came to the 4th spot and Todd Raabe charging to the number 5 position. Todd Raabe was flying through the field and would grab the number three spot from Bushey as the caution he needed would fly with three to go. Under this yellow a wild turn of events would take place. Todd Raabe, who was running in third, was forced to pit for his 2nd flat tire of the night. If that weren’t enough, leader Bruno Richard also had a right rear tire go down sending him to the pits. To finish it all off, Peter Raabe also experienced a flat tire and would make his way to the pit area as well. This left Michael Dillon in the lead after this crazy turn of events as the field went back to green. Dillon would lead the final laps and score his 2nd win of the year in Street Stock. Tyler Bushey would make it close but settled for 2nd over Sylvain Gauthier, Martin Gagnon and Peter Raabe would charge by Jessica Pasinetti at the line to grab the fifth spot.

The Outlaw Vintage division was making their third appearance of the season at Brockville and Kenny Polite would race to the early lead at the start of the 12-lap event over Pete Stapper and Jeff Bode. Sheldon Hoogwerf would have problems in turn 3 as his car sailed off the turn. Hoogwerf would return to restart at the tail of the field. Kenny Polite would reassume the lead and begin to put on a dominant performance. Without help of another yellow flag Pete Stapper and the rest of the field would have no chance of catch the defending track champion. Polite would charge to his 2nd win of the season and 2nd in two days after winning a Vintage feature at Brewerton Friday night. Pete Stapper would cross in 2nd with Sheldon Hoogwerf coming through the field to round out the top three.

Next week the annual tradition of driver autographs will continue at The BOS along with the invasion of the Patriot Sprint Tour with long time track supporter Tackaberry Construction on hand as the title sponsor. 1000 Islands RV 358 Modifieds, Sportsman Draper Doors Rookie Sportsman Street Stock and Mini Stock will all be in action. This is the fans chance to get up close with their favorite driver. For more information on points, results and news happening at the speedway, check out our website at brockvillespeedway.com. Don’t forget to follow us on our our Facebook, Twitter and our new Instagram page for more of what’s happening at “The BOS”. 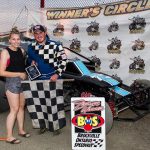 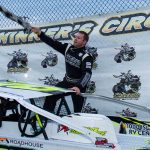 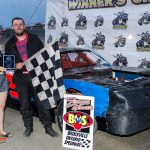 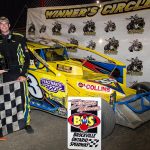 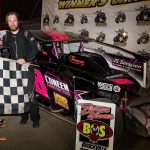