Ryan Arbuthnot Doubles Up On Weekend With Brockville Victory 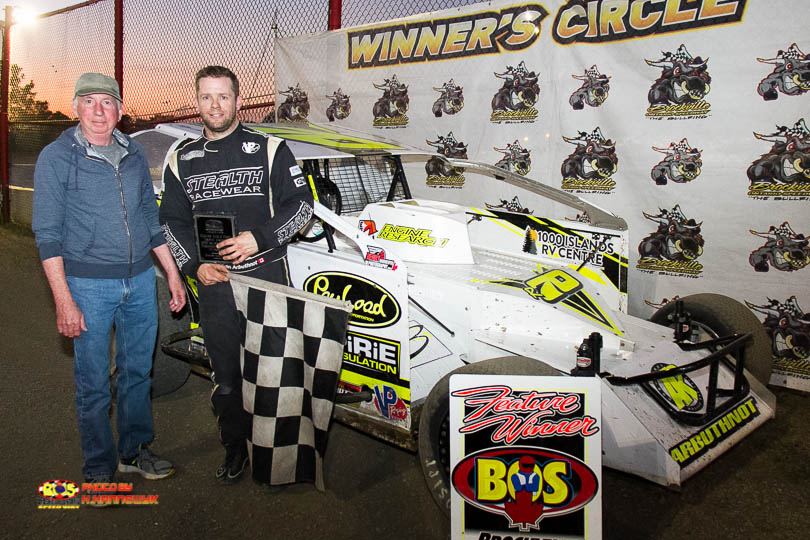 BROCKVILLE, ON – On the hottest evening of racing so far in the 2019 season the Ogilvie’s Triple Crown Series for the 1000 Islands RV 358 Modified and Sportsman took to the speedway for a pair of 50 lap events last night. Track regulars and outside invaders made for some exciting racing with track regulars showing everyone the fast way around.

Tim O’Brien and last week’s winner Kyle Dingwall brought the field to the start of the 358 Modified the portion of the program with O’Brien taking the lead early on with Ryan Arbuthnot and Kyle Dingwall. O’Brien would lead the opening 4 laps until Arbuthnot would take control of the race on lap 5 using the outside lane off turn 4. Once in front Arbuthnot was setting a comfortable pace, not pushing the car too hard but still maintained a solid lead but Luke Whitteker was on the move early taking 2nd from O’Brien and was marching forward to try and catch Arbuthnot. On lap 17 Ryan Poole spun his car off turn 2 bringing out the first yellow of the night. Arbuthnot and Whitteker would continue their battle for the lead with Arbuthnot getting the edge but Whitteker was able to keep pace. On lap 24 Steve Bilow spun off turn 4 to bring out the next caution. On the restart Arbuthnot again took the lead but Luke Whitteker had a plan and was challenging for the lead. That all changed quickly when Whitteker clipped an infield tire in turn 2 ending what could have been a great run. On the restart it was Arbuthnot and O’Brien continuing their battle for the lead with Lee Ladouceur, Kyle Dingwall and Joey Ladouceur completing the top 5. Arbuthnot once again would pull away but Tim O’Brien was playing the patience game as he steadily reeled in the leader by lap 48 and looking to make his move. On lap 41 the final yellow flew for Brian McDonald who slowed in turn 2. On the final restart Arbuthnot was able to pull away but O’Brien was doing his best to keep it close. On the final lap O’Brien would pull even on the bottom in turn 3, but on this night the top lane was the difference as Ryan Arbuthnot claimed his 2nd 1000 Islands RV 358 Modified win in 3 weeks. Tim O’Brien, Lee Ladouceur, Kyle Dingwall and Joey Ladouceur completed the top 5.

The track went through some major changes at the start of the Sportsman 50 lap portion of the Ogilvie’s Series with so far undefeated Ryan Scott taking the lead from the pole over Jarrett Herbison, Shane Pecore, Gabriel Cyr and Xavier Andrews. The track took some drastic changes right from the beginning as everyone for the fast lane was at the bottom of the speedway and began to migrate there which was perfectly fine with the race leader as he held the lead solidly in the opening 4 laps. On lap 4 Joey Paquette experienced handling problems as he spun in turn 4. On the restart it was once again Ryan Scott to the point over Herbison, Cyr, Pecore and Jesse Hudson. From this restart forward it was a top 3 break away at the front with Scott leading by a straightaway with Herbison slowly closing in while Pecore was able to get by Gabriel Cyr for third once again. On lap 28 Johnathon Ferguson was able to close in and make it a 4-car battle for the top spot as he got by Cyr for position and the chase was on. On lap 29 Bob Ray slid off the track in turn bringing out the caution. The green flew once again and it was still Ryan Scott with the advantage over Herbison, Pecore, Ferguson and now Xavier Andrews in 5th. Andrews was able to sneak by for 4th and tried at will to run down the top 3. The final caution flew on lap 41 for Gabriel Cyr who’s great run ended on the back stretch slowing to a stop. On the final restart Ryan Scott would do everything correct as he pulled away in the remaining laps to secure his 3rd straight Sportsman win and the Ogilvie’s Series opener. Jarrett Herbison came across in the runner up spot for the 2nd straight week followed by Shane Pecore, Xavier Andrews and Johnathon Ferguson.

In Street Stock action Nick Gauvreau would lead the field in the opening laps over Michael Dillon, Tyler Bushey, Rock St. Amour and Nick Merkley. Gauvreau was looking to put all the early season mechanical issues behind him as he was fast in the early going but Tyler Bushey was on the charge. On lap 8 Bushey had closed in on the leader as Gauvreau tried to make his was through the slower traffic and the battle was on. On lap 10 Bushey was able to pick the correct lane and take over the top spot bringing Michael Dillon to the number two position. Over the final laps Bushey was the dominant car and without a caution flag Michael Dillon was unable to close in as Tyler Bushey marched to his 2nd straight win in Street Stock ranks. Michael Dillon would come home 2nd with Nick Gauvreau, Keith Riddell and Rock St. Amour completing the top 5.

The Draper Doors Rookie Sportsman ranks saw former karting regular Evan Reynolds take the lead early in the 15-lap event with last weeks winner Terry McClelland, Dylan Kirkland, Domonick Merkley and Tyler Stewart giving chase. Reynolds had a great car on this night and was looking to become the 3rd different winner in three races but McClelland and Kirkland would have something to say before the race was over. Kirkland had a fast car and wad able to get by Terry McClelland for the number two spot but with a narrow groove, it was going to be tough to get by for the lead. On the final lap Evan Reynolds hit his marks perfectly and despite a last lap charge by Dylan Kirkland, it was not to be as Evan Reynolds would drive on to record his first career Rookie Sportsman win. Dylan Kirkland, Terry McClelland, Tyler Stewart and Stephane Fournier would complete the top 5.

The Mini Stock 15 lapper saw Brandon Henderson take the lead at the drop of the green flag over Jared Galway, Marc Dagenais, Andrew Leroux and Tyson Slinger. Henderson had been shut out of victory lane since July21st of last year and was looking to make his return but last weeks winner Marc Dagenais was closing quickly. John Lamarche would bring out the yellow just past halfway as he made contact with an infield tire in turn 4. On the restart Marc Dagenais would take the lead briefly but down the back stretch into turn 3 Henderson would retake the spot and begin to pull away. Despite a last-ditch effort by Dagenais, it was not to be, at least for the moment. At the checkered flag it was Henderson crossing the line first, but due to a post-race technical infraction Marc Dagenais would get credit for the victory. Jamie Larocque would be credited with 2nd with Jared Galway, Tyson Slinger and Andrew Leroux completing the top 5.

Next week the official soft drink of the Brockville Ontario Speedway, Coca Cola will be on hand for another big night of racing. Action in the 1000 Islands RV 358 Modified, Sportsman, Draper Doors Rookie Sportsman, Street Stock and Outlaw Vintage will take place. The Mini Stocks have the night off. For more information you can follow the speedway on Facebook, Twitter and our new Instagram page as well. For points, results and everything happening at the track, visit our website atbrockvillespeedway.com. 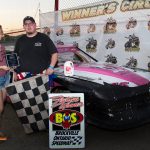 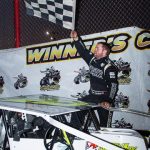 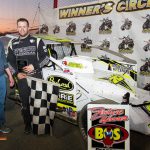 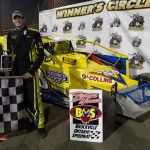 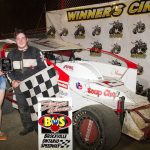 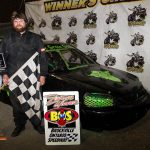