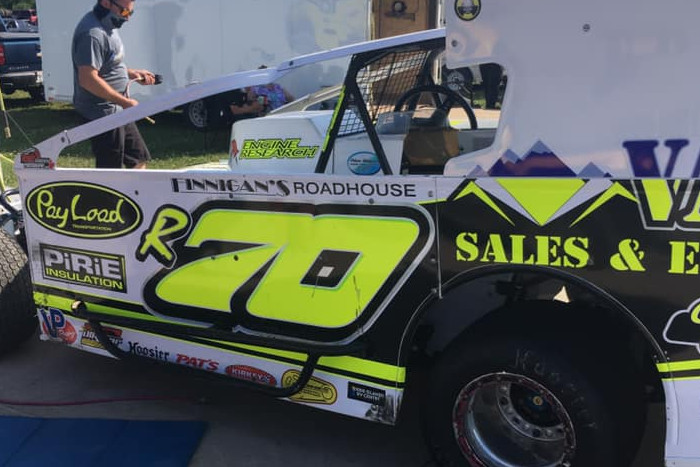 After track crews applied a brand-new surface to the Brockville Ontario Speedway the only true way to test it was to have cars on the race track. Cars showed up as 35 drivers made their way to The BOS on Saturday evening. Cash prizes were on the line for the fastest driver in 358 Modified, Sportsman, Street Stock and Mini Stock, in the second Beat the Clock event of the season.

In the 358 Modified division Ryan Arbuthnot took to the new surface and picked a perfect time to test his new sail panels. Arbuthnot who still struggled with handling, was able to click off a lap of 15.537. 358 Modified sophomore and soon to be new father Tristan Draper was close behind without sail panels, turning a lap of 15.800 later in the session. Joe Banks gave it a run with and without his sail panels crossing the line with a quick time of 15.871. Johnathon Ferguson was also in attendance and still getting accustomed to his new 358 ride for 2020, clicked off a lap of 16.114 with 358 Modified rookie Bruce Makinson at a 16.886. Despite a few late runs and a little extra moisture applied to the surface, Ryan Arbuthnot would claim the $400 top prize over Draper and Banks.

A good field of Sportsman drivers were on hand and Xavier Andrews was the driver to beat as he went to the top of the board with a 15.915. Tyler Stewart who won three times in the Rookie Sportsman ranks at Brockville in 2019, took the number two spot mid-way through the day with a time of 16.329. Dale Gifford was strong on the day as well and made a great run to the top 3 posting the 3rd fastest time of 16.386, over 2019 Rookie Sportsman Champion Evan Reynolds who was 4th fastest at 16.646 and Jamie Young completing the top 5 at 16.883. Andrews was able to hold on to the top spot for the remainder of the day and claim $250 in the process.

Shawn Hodge has been fast at every practice session this season and he picked the perfect time to be quick on Saturday, as he posted the fastest time with an 18.824. Keith Riddell who was close to getting to victory lane several times in 2020, would post the 2nd quickest time with an 18.980 and Bob Williams was able to make a run before mechanical troubles would sideline him for the day as his car showed smoke in the opening session. Williams clicked off the third quickest time of 19.501. Hodge would go unchallenged the rest of the day to claim the top prize of $150.

Although an unusual season for all, it has been a dream season for 2nd year Mini Stock driver James Clarke. After posting his first career win during a pay per view event at the Cornwall Motor Speedway on June 6th with a last lap pass, Clarke would post a quick time of 18.783 to start the day. Dustin Bode who was quickest in the last Beat the Clock event on June 13th, would post the 2nd fastest time of 19.022 and defending Cornwall Speedway Mini Stock Champion Mike Gaucher with a lap of 19.123 to complete the top 3. Mark Packer was 4th fastest at a 19.670 with Curtis Lindsay completing the fast five at 19.856. Clarke would continue his great season in 2020, as he would hold off Bode for the $100 award for quickest Mini Stock time.

Also, on hand were several Rookie Sportsman competitors and even though he had a meeting with the 4th turn wall late in the day, Andrew Young was fastest with a 17.383. Young was followed by Stephane Fournier at an 18.334, 13-year-old Holly Denard continues to improve each time out posting the 3rd fastest time of 18.644 and Michel Fournier with a 19.563. Vintage Modified drivers were finally able to get some track time at Brockville this season along with Empire Super Sprint driver and Brockville native Paul Pekkonen.

The staff and management would like to thank everyone who helped make the event a success as well as the sponsors who contributed to the prize fund including Lying Photography, Welburn Auto Service, Melinda Held Cowan, Belair and Sons Garage and Splash Well Drilling. A big thanks to all the drivers and teams who supported the second Beat the Clock event of 2020. Track management is still working to hopefully host racing with fans in the stands very soon. Stay tuned to brockvillespeedway.com, the track Facebook, Twitter and Instagram pages, for further updates. We hope to see all the dedicated fans very soon.