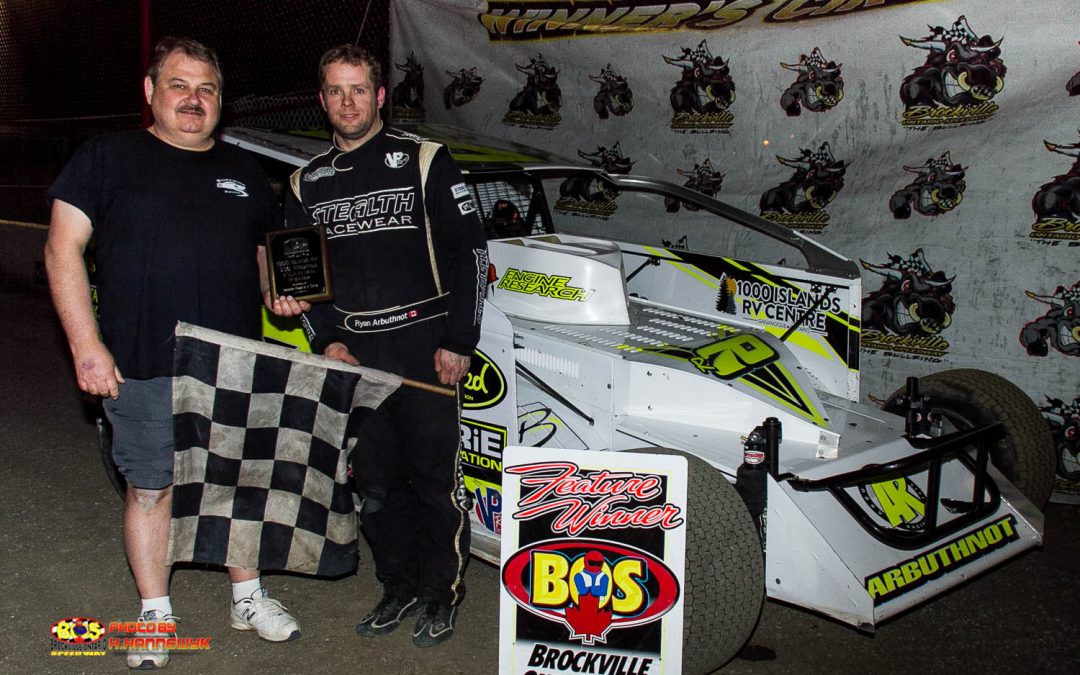 BROCKVILLE, ONT – The 50th anniversary season at the Brockville Ontario Speedway was delayed for a week because of Mother Nature but this past Saturday night was memorable as the race track was in perfect condition and the drivers were ready for battle on a fast race track. The first ever Brockville Speedway Modified feature winner and Hall of Famer Bob Green was on hand as well to the delight of the crowd and served as grand marshal.

The Street Stock division highlighted the night with a special 50 lap $500 to win event as veteran Todd Raabe and Sylvain Gauthier led the field to the green flag on Superior Cellular and Sound night. Raabe would jump out and lead the opening 5 laps but pole sitter Gauthier would have his issues as he spun in turn 4 bringing out the first yellow. When the green flew it was Raabe in his brand-new car taking the top spot again over Michael Dillon, Nick Gauvreau, Bruno Richard and Tyler Bushey. Nick Gauvreau had clearly one of the fastest cars on track, which also proved to be a down fall as he ran it too hard into turn 2 and lost several positions. Gauvreau would fight back later in the event. Todd Raabe was still in front but he was not running away, he had Bushey, Richard, Dillon and Steve Brady right there with him making it a solid 5 car battle for the win. You could literally throw a blanket of the top 5 as they diced it up for the lead with Raabe staying up front and in control. On lap 25 is when things came unglued for Raabe as he broke while leading, handing the lead to Bruno Richard as Raabe retired to the pits. The intensity was not done at the front with Richard and Bushey battling side by side for the lead until lap 32 as another caution flew this time for Steve Brady as he dropped a driveshaft in turn 3 ending a sure top 5 finish. When the green returned Richard and Bushey continued their side by side battle with Nick Gauvreau who was making his 3rd run at to the front after some tough luck, but the night would get worse. On lap 41 heading into turn 4 Gauvreau’s car made a quick right-hand turn and pounded the outside wall bringing out the caution. Gauvreau suffered heavy damage. On the restart Bruno Richard got the jump he wanted and pulled out to a 5-car length lead over Bushey and would not look back scoring the big pay day. Bushey held on for 2nd over Michael Dillon, Nico Leblanc and Keith Riddell.

The 1000 Islands RV 358 Modified division was set for 30 laps and as it has been in the past it was an O’Brien Arbuthnot front row. This time it was Tim O’Brien driving the family owned small block on the pole but Arbuthnot would get the better of the two cars from the outside lane over Luke Whitteker, Lee Ladouceur and Chris Herbison completing the top 5. Several early race cautions slowed the pace of the event as Brian McDonald, Andy Lloyd, Mikael Labreche and Steve Bilow all spun in separate incidents through the first 7 laps. Once the driver started mixing it up on the race track Arbuthnot held a slight lead using the top side in turns 1 and 2 and the bottom in 3 and 4. O’Brien was determined as ever in his new ride as he stayed pace and was putting the pressure on the leader running in 2nd with Luke Whitteker right there to challenge from 3rd. These three drivers put on a great display of driving talent, until lap 15 when Steve Barber spun in turn 3 and was nearly collected by Joe Banks and the caution flew. Under the same yellow Kyle Dingwall also broke the front suspension on his machine, he would retire to the pits for the night. When the green flew again it was Arbuthnot and O’Brien in the top two spots with Whitteker 3rd, Tim Fuller made his way from 9th on the grid to 4th with Corey Wheeler rounding out the top 5. Arbuthnot was trying not to abuse his tires which opened the door for O’Brien to close in and make a run at the leader. The Kingston native made several attempts on the bottom in turns 1 and two but Arbuthnot was too strong from the top side and held the lead with Whitteker, Fuller and Wheeler close behind. The final yellow flew on lap 24 for Ryan Poole who slowed to a stop on the front stretch. When the green flew Arbuthnot remained in control with O’Brien and Whitteker right there to make a run. O’Brien would make it close in the final laps, and he made a big move on the outside lane in turn 3 coming to the checkered flag and edged in front briefly but the Renfrew Ontario native was not to be denied as he would pull away to grab the big win over O’Brien, Luke Whitteker, Tim Fuller and Corey Wheeler.

The Outlaw Vintage division was dominated last season by Kenny Polite and on the opening day it was no different as he took the lead at the drop of the green flag over Josh Powers, Jason Powers, Paul Billings and Denzil Billings Jr. Polite was running away to a comfortable lead and it was looking like the race would go caution free as Jason and Josh Powers continued to stage their own battle for the top spot. On lap 12 the great run for Josh Powers ended as he spun in turn 3 while running 2nd and the caution flew. On the restart Polite would drive away from Jason Powers and Steve Billings and never look back as he recorded the win, his 3rd straight dating back to last year’s sweep at the Loud ‘n’ Dirty Fall Nationals. Jason Powers would cross in 2nd followed by Steve Billings, Josh Powers and Denzil Billings Jr.

The 25 lap Sportsman feature was ready for green as Xavier Andrews and Jarrett Herbison led the field to green heading into turn one but it was short lived as they hooked bumpers in the corner and slowed to a stop before the first lap was completed. Another scary incident occurred in the early laps as Shane Stearns and Geneva Sheffield would come together in turn one sending Stearns spinning, who was then hit hard by Melissa Gifford which also sent other cars spinning, and the track was blocked, forcing a red flag. Stearns was ok however Sheffield would take a slow walk to the ambulance but would be ok. This would bring Ryan Scott and Shane Pecore to the front row as both drivers would not hook bumpers in turn one leading Jon Mills, Johnathon Ferguson and Dan Ferguson in the early laps. The defending track champion had a bit of an edge over Pecore who was trying to keep pace with Mills and Johnathon Ferguson having their battle for 3rd. On lap 7 the yellow came out as Jamie Young and Jason Rose both spun separately in turns 3 and 4. On the restart Scott continued to hold Pecore at bay for the lead but the three time track champion tried everything to get by as they once again drove out to a commanding lead over the field over Ferguson, Mills and Cornwall regular Kurtis Cayer completing the top 5. At halfway Scott and Pecore both entered lapped traffic which provided tense moments but they both navigated it perfectly and continued their battle up front. On lap 13 Jesse Hudson made heavy contact with the wall off of turn 1 causing the yellow to fly again. Hudson was not hurt but the car was done for the night. As laps started to click off Scott, Pecore and Johnathon Ferguson were in a great battle for the lead but the night was about to end. On lap 21 the caution flew which slowed the field. Under yellow Jon Mills and Kurtis Cayer, who were running 4th and 5th would get hooked together in turn 3. Under this caution the skies opened up forcing race officials to cancel the remaining 4 laps and the rest of the night giving Ryan Scott the win over Pecore and Johnathon Ferguson. Since Mills and Cayer were not the cause of the yellow and the race not returning to green, they would both remain in the top 5 and come home fourth and fifth respectively.

With night one in the books the action shifts to Memorial Day weekend for a full program which includes a 50 lap Mini Stock feature with $300 on the line plus a full show for the 1000 Islands RV 358 Modifieds, Sportsman, Draper Doors Rookie Sportsman and Street Stocks with Rycon Electric on hand. 1971 Modified Track champion Walter Pennock will serve as grand marshal for the evening. The remaining Mini Stock and Draper Doors Rookie Sportsman features will be made up, stay tuned to Facebook, Twitter and Instagram along with brockvillespeedway.com for more information on the make-up dates. 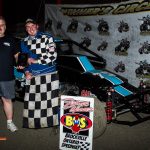 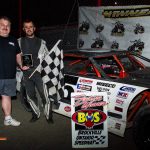 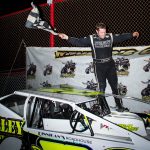 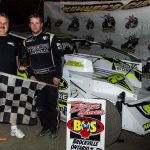 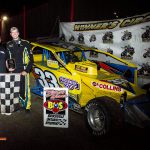