Sheppard Romps from 12th for his First Win at the BOS 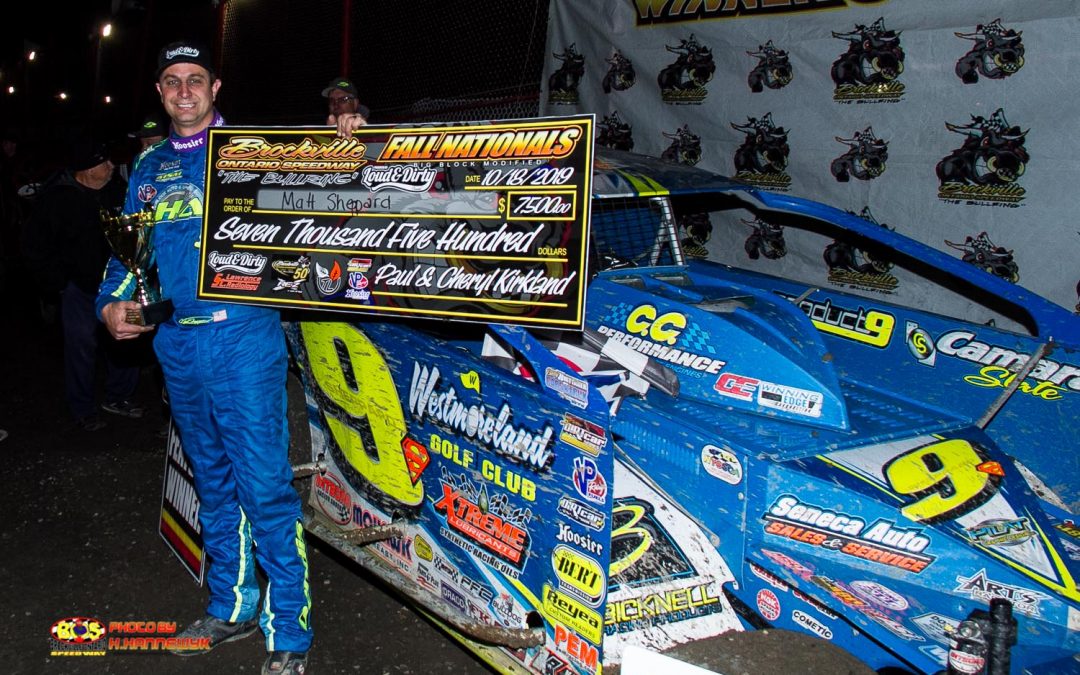 BROCKVILLE, ONT – Matt Sheppard got by Jack Lehner on a late restart to score the win in the Super DIRTcar Series event at Brockville, a critical win for the ultra-tight points battle on the Series and the $7,500 paycheck.

“I’ve had a lot of really good runs here, and I can’t think of a better night to get one than now,” said Sheppard. “The track was really racy tonight, it’s not often you can start twelfth here and get to the front, but we had a really good piece and we did it. It’s definitely big heading into Charlotte. It’s a tight points race and this helps a bunch.”

Jack Lehner took the lead at the start of the 100-lap feature, facing heavy pressure early from Billy Decker. Decker put a nose out front with 10 and 11 laps in, but both times Lehner throttled down and kept the lead.

A lap 16 spin by Marcus Dinkins alleviated the pressure for Lehner momentarily, but Decker was right back at it on the restart.

Decker was officially scored the leader on lap 21, but once more Lehner got back by. After falling back by half a second, Decker slowed for a yellow on lap 23, with the right rear shock failing on his car.

On this restart, Lehner now had to face new challengers in the form of Larry Wight and Danny Johnson, but like before, Lehner kept the lead and even built up a small gap over Wight.

This lead was quickly erased with a lap 36 red flag, as defending event winner Erick Rudolph jumped the berm and rolled five times down the turn one banking.

While Lehner and Wight remained status quo on the restart, Sheppard clawed up to third from twelfth by lap 40. While Wight hovered about three to five car lengths behind Lehner, Sheppard reeled in Wight and put heavy pressure on him for the second spot.

While Wight held off Sheppard, Mike Maresca closed in on both of them, snatching third from Sheppard at halfway. However, Maresca’s good run came to a quick end as he stopped with no steering on lap 53.

Lehner had a comfortable gap over Wight prior to the caution, and kept the same pace on the restart, once again building up a small lead. After a number of laps swapping lanes, Sheppard finally got under Wight for second on lap 60, then setting his sights on Lehner.

Behind them, Sheppard’s title contender, Mat Williamson, had climbed up to fourth on the scoreboard, not far behind Wight.

When Sheppard got to second on lap 60, Lehner’s lead was just shy of two seconds. After six or seven laps, Sheppard halved Lehner’s lead, within a second and within a few car lengths.

Sheppard didn’t need to work to close the rest of the gap, as Paul St. Sauveur slowed on lap 69 and erased what lead Lehner had left.

As soon as the field went back green, Sheppard went to the lead and stole Lehner’s line on the cushion. Once securely out front, Sheppard dropped low on the speedway, while Lehner surrendered second and then third to Wight and Williamson.

Sheppard set a torrid pace out front, stretching his lead to over a straightaway by lap 85. However, Jimmy Phelps spun with front end damage, giving Wight and Williamson a clear shot at Sheppard.

The top three settled in on the restart, with Sheppard driving away from Wight. After repairs from slowing earlier, Decker got by Lehner for fourth, this time making the pass stick unlike the opening stages of the race.

While they battled at the back of the top five, Sheppard was gone, cruising away to the crucial Super DIRTcar Series victory.

Wight floated around the middle of the top five, and was perfectly okay with his runner up finish.

“I was in survival mode,” Wight said. “Once Matt got out in front and I saw how fast he was, I was fine to run second. I didn’t want to wreck my car trying to get close to him, so I just rode around and brought it home where I was comfortable.”

Williamson entered the night with a 10 point lead over Sheppard, but stayed close enough to leave Brockville just a few markers behind Sheppard.

“That was probably the toughest to drive race car I’ve ever put on a podium,” Williamson said. “It was a battle out there. I’m happy Erick is okay, that was a wild roll and it happened right in front of me.”

Decker regrouped to finish in the fourth spot after early race issues with Lehner holding on for his best series run to finish in fifth.