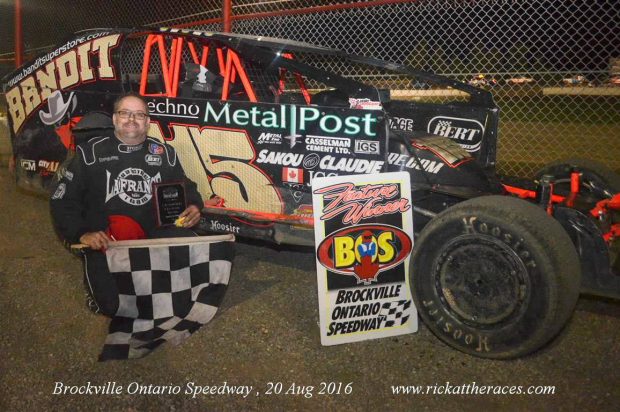 With only 3 weeks remaining in the regular season points races are heating up in all 5 divisions at the Brockville Ontario Speedway Bullring. With all the excitement of the regular classes the Patriot Sprint Tour was nearby and decided to pay a visit to the fast quarter mile and put on great show for the huge crowd and the good folks at Jim’s Performance Plus.

The Patriot Sprint Tour was set for 25 laps but saw several early cautions in the opening laps. Early pace setter Paulie Colagiovanni led early on but was followed closely by Lee Ladouceur, Ryan Turner, Sammy Reakes IV and Alex Vigneault. During a string of caution flag Jared Zimbardi was able to make his way to the front of the field. With everyone running the bottom lane Zimbardi used his experience to grab the lead on lap 6 from Coliagiovanni with Ladouceur, Turner and Reakes giving chase. Several mid race yellows also plagued the 25 lap event Steve Poirier one of the driver who has a great record at Brockville was caught up in a wreck on lap 22 and would not be able to return, he was credited with a 22nd place finish. As the final laps clicked off 2 time Patriot Sprint Tour Canada Series winner Jason Barney was making some big moves late in the going, trading 4th and 5th with Sammy Reakes over the finals laps. In the end Jared Zimbardi survived all the yellow flags, red flags and many late race restarts to score his series leading 8th win of the 2016 season. Paulie Colagiovanni came away with his best Patriot finish of 2nd while Lee Ladouceur, Jason Barney and Ryan Turner completed the top 5.

The 358 Modifieds were set for battle as Jeremy LaSalle and John Mulder brought the field to green with LaSalle taking the early advantage with Chris Herbison and Tim O’Brien close behind. LaSalle had a great car in the opening laps but Herbison was right there to challenge the Rookie. On lap 9 Stephane Lafrance was on the move from his 7th starting spot as he charged to the 3rd spot, and quickly ran down the top 2 drivers. On lap 13 Lafrance had a great car used the top lane in turns 1 & 2 to go from 3rd to first around both Herbison and LaSalle and start to put on a driving clinic. Just past halfway Matt Billings was on the move as he got by LaSalle to move into 4th and was in pursuit of the top 3 drivers. Points leader Danny O’Brien was also on the move charging from 13th to the top 5 getting by LaSalle and Billings by lap 18 and was looking to run down Herbsion for 2nd. As the laps clicked off Stephane Lafrance was getting closer to scoring his first win of the year but late cautions and fast closing drivers were making it tough on him. On the final restart on lap 26 Lafrance was able to get away by 4 car lengths and would not look back as he finally put the bad luck behind him to grab his first 358 Modified win of 2016 at Brockville. Matt Billings was able to charge by Chris Herbison over the closing laps to finish 2nd while Herbison, Danny O’Brien and Gage Morin completed the top 5.

The Sportsman division was set to go next for their 25 lap event and rookie Jarrett Herbison was able to take the top spot away at the start of the event over Tristan Draper, Connor Dawdy, Dylan Evoy and Shane Pecore. Anthony Rasmussen lost control of his car in turn 2 bringing out an early caution flag. When the race went back green Draper had enough of running 2nd and was able to charge by Herbison on the top side to take over the lead. After disappointment from 2 weeks ago Shane Pecore was looking to get some redemption as he moved through the field and was on the race leaders back bumper by lap 9. 1 lap later Pecore moved by Draper on the bottom to take over the top spot and quickly pull away. Behind the leader Dylan Evoy was also moving forward taking 2nd from Draper and moving in on the race leader. At the halfway point Pecore held the lead with Evoy close behind in 2nd while Draper, Ryan Scott and Steve Barber completed the top 5. On lap 14 Jeremy Coulter and Josh Kirkland both spun in turn 3 bringing out the caution. On the restart Evoy tried to make the outside lane work to grab the lead but the bottom was fast and Pecore used it to hold on to the top spot leaving Evoy to battle Ryan Scott for 2nd and 3rd. After a heartbreaking loss 2 weeks ago Shane Pecore finally put it all together and made his way to victory lane for the 3rd time this season. Evoy settled for 2nd while Ryan Scott, Steve Barber and Shane Stearns rounded out the top 5.

The Mini Stocks rolled trackside for their 15 lap feature and former karting champion at Brockville, Dylan Kirkland, charged out to the early lead over Teddy Baird, Bob Ray, Francis Blanchette and John Lemarche. Kirkland had a fast car in the early going but points leader Bob Ray was on the move and putting some pressure on the sophomore driver. On lap 6 the first caution flew for Richard Bartholomew who slowed to a stop on the front stretch. When the green flew Bob Ray went right to work as he took over the lead on lap 7 and began to put on a dominant performance. Behind him Francis Blanchette was charging forward as he took 2nd from Kirkland with Teddy Baird and Chris Bakker now making up the top 5. In the final laps Bob Ray had everyone covered as he padded his points lead grabbing his 5th checkered flag of the year over Blanchette, Kirkland, Teddy Baird and Chris Bakker.

In Street Stock Tyler Bushey was using a backup car on this night but did was just as fast as he took the lead from the drop of the green leading the opening 5 laps with Sheldon Hoogwerf, Jason Fetterly, Alex Gagnon and Nick Gauvreau completing the top 5. At the halfway point Bushey remained in control but the caution would fly for Michael Dillon who came into contact with an infield tire in turn 4. On the restart Hoogwerf was able to grab the lead while Bushey fell to 2nd over Fetterly, Gagnon and Gauvreau. On lap 11 things just got plain weird as Tyler Bushey blew a right rear tire in turn 1 and coasted to a stop on the back stretch. coming to the caution flag Sheldon Hoogwerf lost a right rear tire and axle while leading, behind him Travis Andrews had no place to go hitting that tire sending him into the infield wall and upside down. The caution was quickly repalced by the red flag. Andrews was able to climb out and walk to the ambulance under his own power. This left Brock Cullen at the head of the field and despite a late charge but Alex Gagnon and Nick Gauvreau, Cullen was not to be denied as he grabbed his 2nd win of the year over Gagnon, Gauvreau, Jason Fetterly and Xavier Andrews.

The Rookie Sportsman closed out the night with a 15 lap feature and Dan Christiensen took the lead from the outside pole over Nicole Austin and Jacob Clancy. Christiensen would lead the opening 5 laps before Clancy took control of the field but behind him 3 time winner Derek Cryderman was charging hard towards the front. At the halfway point Clancy and Cryderman continued to hold the top 2 spots while Matthew Barbor held a solid 3rd with Pascal Racette and Christiensen competing the top 5. With no cautions over the final laps, Jacob Clancy stayed strong in the race lead and was able to drive on for his 3rd win of the season in Rookie Sportsman and extend his points lead in the process. Derek Cryderman would cross in 2nd while Pascal Racette would complete the top 3 at the finish.

Next week a full show is on tap plus another visit from the Outlaw Vintage Modifieds. Racing starts at 7pm.