Arbuthnot and Ferguson Strike first in Ogilvie’s Series at Brockville 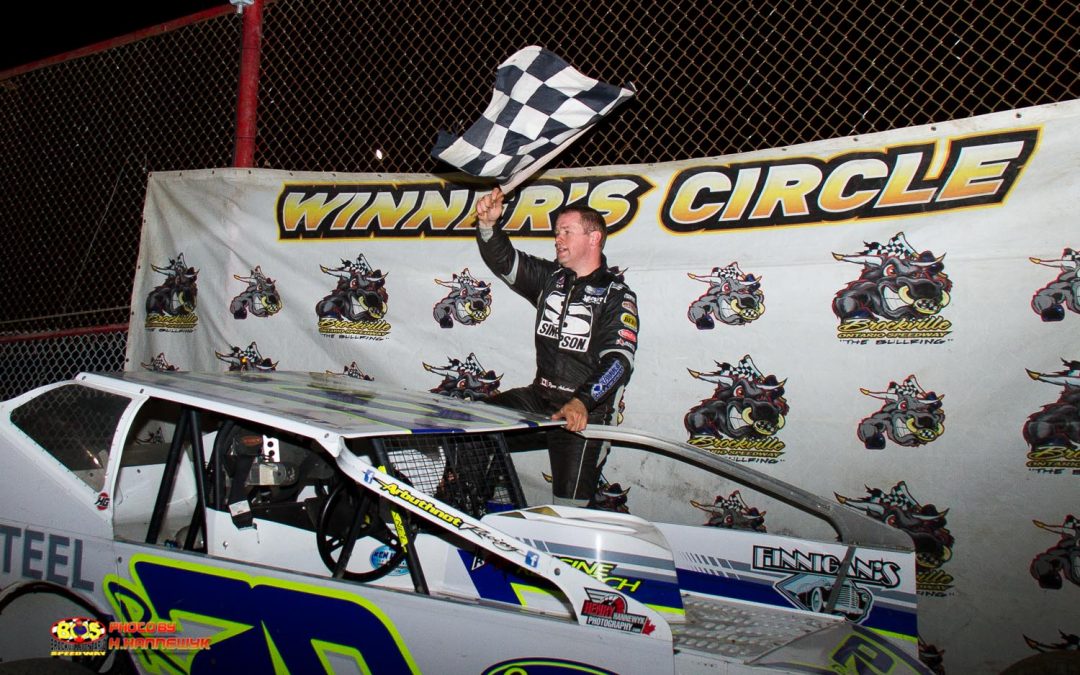 The Brockville Ontario Speedway may have seen a lot of rain during the week, but track crews did all they could to make the best racing surface possible this past Saturday night. The night provided great excitement and thrilling finishes.

The 40 lap Ogilvie’s Triple Crown Sportsman Series, which was also the first leg of the DIRTcar Sportsman North Canada Region, saw Adam Rozon lead the way over Bobby Herrington, Xavier Andrews, Shane Pecore and Shane Stearns. Rozon was fast early, but it was Pecore taking control of the race on lap 10, over Rozon and Stearns. Defending track champion Bobby Herrington charged to second at halfway and was closing on Pecore quickly. On lap 24 Herrington took the lead as Pecore began to fade. Behind the leaders Cedric Gauvreau, Jessica Power and Shane Stearns were charging forward and broke into the top 5 and would be key players in the later stages. On lap 27 Pecore’s great night came to an end as he stopped off turn 4. On the restart Herrington looked to have the car to beat but with three laps to go he would break and attempt to pull into the infield. Cedric Gauvreau tried to get by but tangled with Herrington, allowing Jessica Power and Dan Ferguson to get by and the yellow flew. On the final restart Power led the way and was looking for her first Ogilvie’s win and DIRTcar Sportsman tour win but Dan Ferguson drove to the top side and grabbed the lead at the white flag. Power tried to get back by but Dan Ferguson would score his first Ogilvie’s win and first ever DIRTcar Sportsman Series win also. Power crossed 2nd over Adam Rozon, Shane Stearns and Fire Swamp.

The 50 lap Ogilvie’s Triple Crown for the DIRTcar 358 Modifieds took to the speedway and Chris Raabe was the dominant force over Brian McDonald and defending track and series champion Ryan Arbuthnot. Raabe had a great car and was looking to drive away from the field while McDonald, Arbuthnot, Gage Morin and Tristan Draper tried to keep pace. On lap 26 while in traffic, Raabe and McDonald both went for the same piece of real estate, resulting in McDonald making heavy contact with an infield tire in turn 2 ending his night. This brought Arbuthnot and Draper into the mix on the restart, as Raabe grabbed the lead, but it would be short lived. Raabe broke in turns three and four ending his chance at victory. Ryan Arbuthnot would take the lead and a great battle with Tristan Draper took place, as Draper tried several times to get by but couldn’t make it work, while Gage Morin watched the battle from third. On lap 46 Draper’s night came to an end as he broke the front end in turn 4. On the final restart it was a battle between two former series champions as Gage Morin, the 2015 Ogilvie’s champion, tried to get by Arbuthnot. On this night it was all Ryan Arbuthnot as he marched to his 2nd win of 2022. Morin settled for 2nd, with Johnathon Ferguson recovering from two early race spins to finish 3rd. Ryan Scott came from a lap down early on to finish 4th and Chris Herbison recovered from early race issues to finish 5th.

Nathan Lambert led the opening 4 laps of the 12 lap Novice Sportsman feature over Kiera Turner and Sandy MacFarlane, who was in a borrowed ride for the night. Lambert was fast but the yellow flew on lap 4 for Paul Donnelly, who broke in turn 4. On the restart, MacFarlane took the lead and drove away from everyone. MacFarlane would cross the line in the top spot over Jordan Wood and Mini Stock star Hayden Brown. MacFarlane however, would come up a bit short of the minimum weight at the scales, which would give the win to a surprised Jordan Wood, his 2nd win in the division, Hayden Brown would get credit for 2nd with Shawn Hodge completing the podium.

Todd Raabe is always a dominant driver in the Street Stock ranks and this night was no different. Raabe started up front, took the lead and would go unchallenged the entire way to win the caution free 12 lap feature. Brighton Speedway regular and former Brockville Fall Nationals champion Jeff Humphries was 2nd with opening day winner Brett Horner taking 3rd.

Next week Polite’s Sand and Gravel will be on hand as title sponsor for a full show plus the return of the Supernant Truck Shop Mini Stocks and 1000 Islands RV Crate Sprints. Racing gets underway at 7pm. 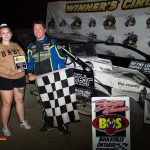 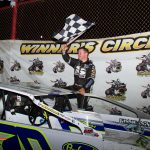 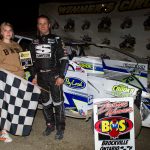 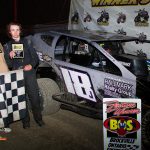 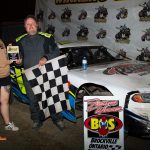