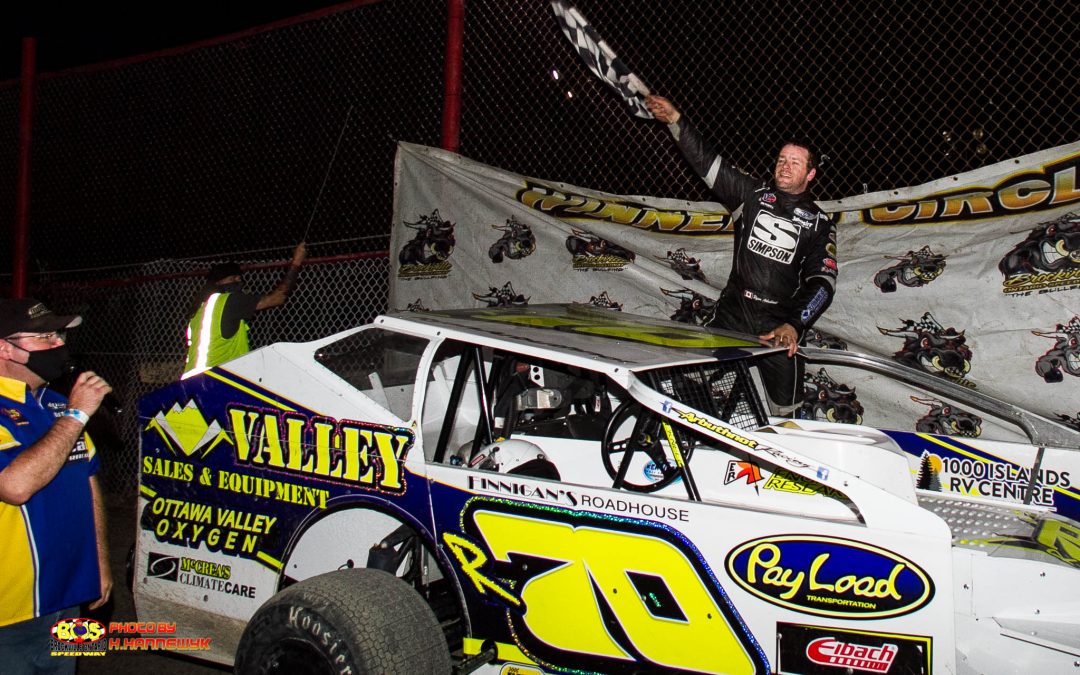 The 2021 season officially began this past Saturday night at the Brockville Ontario Speedway. With new provincial restrictions in place, the speedway saw grandstand capacity of 25% and those in attendance saw some of the best racing in recent memory.

The 50 lap Ogilvie’s Auto and Fleet Triple Crown Series for the 358 Modified division took center stage and reigning track and series champion Ryan Arbuthnot wasted no time taking over the top spot, with Chris Raabe, Johnathon Ferguson, Gage Morin and Kyle Dingwall completing the top 5. Arbuthnot had a fast race car and started to open up a big lead early but Gage Morin was also on the move. The 2015 series champion was able to take away 2nd from Raabe, then began to run down the race leader. Just past the halfway point it became clear that Gage Morin and Ryan Arbuthnot were looking to settle the race amongst themselves as they pulled away from a quality field with Dingwall, Brian McDonald and Raabe completing the top 5. Morin was able to briefly take the lead after a miscue in turn 1 by the leader and it appeared Morin was on cruise control. With 20 to go Arbuthnot retook the top spot but Morin was not going away. On lap 40 that all changed as Morin clipped a pair of infield tires in turn two, which broke the front end on his ride, ending a great run. On the final restart Dingwall put all the pressure on Arbuthnot for the lead with Brian McDonald and Johnathon Ferguson having a spirited battle for 3rd and 4th. In the end Ryan Arbuthnot proved to be too strong as he marched on to score his 1st win since 2019 at The BOS. Dingwall’s strong 2021 season continued with a 2nd place effort. Brian McDonald Johnathon Ferguson and Tristan Draper with come through to complete the top 5 finishers.

In Sportsman 40 lap portion of the Triple Crown, Dylan Kirkland would take the lead at the drop of the green with Ryan Scott and Bobby Herrington making up the top three early on. Kirkland had a great car but Bobby Herrington was on the charge and would take over the top spot-on lap 8. From this point on Bobby Herrington would begin a dominant performance as he led by well over a straight away while behind him the battle was on for 2nd with Kirkland and Ryan Scott. The two drivers fought hard for position and worked lapped cars to perfection in the process as well as Kirkland would hold onto the position with Scott, Ricky Thompson and Fire Swamp giving chase. It appeared that Herrington was going to run off to victory without any pressure, until lap 31 when Trent Wallace slipped off turn one while running in the top 10. This bunched the field up and would give Kirkland one last chance to take over the lead. When the green flew Herrington hit the Greenshield Pest Control Restart Zone perfectly and was able to get the advantage over Kirkland, Scott, Thompson and Jessica Power making the move into the top 5. Without a yellow, nobody was catching Bobby Herrington on this night as he notched his first Sportsman win in many seasons at Brockville and also his first Ogilvie’s Sportsman Series win. Kirkland had a career best second place finish, with Ryan Scott, Ricky Thompson and Jessica Power completing the top 5.

The Mini Stock division had a quality field of drivers ready for 20 laps of racing, however they all were going to have to contend with James Clarke. At the drop of the green Clarke wasted no time going to the head of the field as he led over Jarod Galway and Justin Jodoin. On lap 4 the field came to a stop after a big hit by Hayden Brown, who hit the front stretch wall head on. Brown was ok but the car was towed to the pits and done for the night. On the restart Clarke was able to pull away as Galway and Jodoin continued their battle for 2nd with Marc Andre Voyer and Jamie Larocque completing the top 5. As the laps clicked off it appeared Clarke would cruise to the easy win but Justin Jodoin would slow in turn 3 while running in 3rd, ending his great night. When the green flew Clarke took the lead but Galway stayed close and tried to get by. In the end it was all James Clark as his would go on to claim his second straight opening day win at Brockville. Galway crossed in 2nd with Brandon McMillan rebounding from issues early in the race, to complete the top 3 finishers.

The Crate Sprint cars were set for a 20-lap event and this night belonged to a crowd favorite. Matt Billings would grab the top spot early on over Lee Ladouceur and Rick Wilson. Billings was on cruise control in the Ryan Hunsiger owned machine, but Ladouceur was doing all he could to keep pace. Behind the top 2 a great battle took place as Wilson and Ryan Poole battled hard for 3rd and 4th for nearly the entire event. On lap 17 that came to an end as both drivers tangled in turn 4 resulting in Wilson heading to the pits and out of the event. On the final restart Lee Ladouceur did all he could to get the lead, but Matt Billings proved to be too strong as he claimed his first career Crate Sprint car win after many Sportsman and 358 Modified victories. Ladouceur held on for 2nd with long time Sportsman driver Dan Ferguson completing the podium.

The Novice Sportsman class had a competitive field on hand and karting graduate Justin Cyr would dominate the 15-lap affair. Cyr took the lead at the drop of the green flag with Brennan Moore and Blayden Arquette completing the top three. Despite one caution on lap 6, Justin Cyr would go virtually unchallenged during the entire race to secure his first ever win in the Novice Sportsman class. Brennan Moore would finish his Brockville debut in 2nd with Eric Loyer, who is a two-time Novice Sportsman winner at Cornwall in 2021, completing the top three.

The Street Stock 15 lapper only saw one caution for Brock Cullen who spun in turn 4, but it did not mean his race was over. When the green returned early leader, Nick Merkley battled with Nick Gauvreau for the top spot. Merkley was in search of his first ever win but a spin on lap 7 ended that chance. On the final restart Brock Cullen was able to rebound and take over the lead from Gauvreau. From there Cullen would march on to claim the Street Stock feature.

Next week Superior Cellular and Sound along with J&J Automotive will be on hand for a full program of 358 Modified, Sportsman, Novice Sportsman, Street Stocks and Mini Stocks. Racing starts at 7pm. To pre-book your tickets, head to the schedule portion of our website at brockvillespeedway.com. Also be sure to give us a follow-on Facebook, Twitter and Instagram. 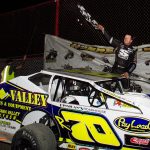 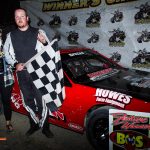 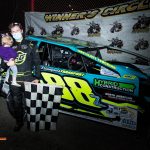 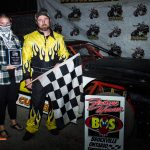 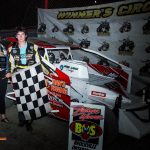 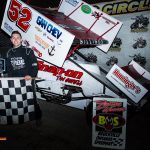