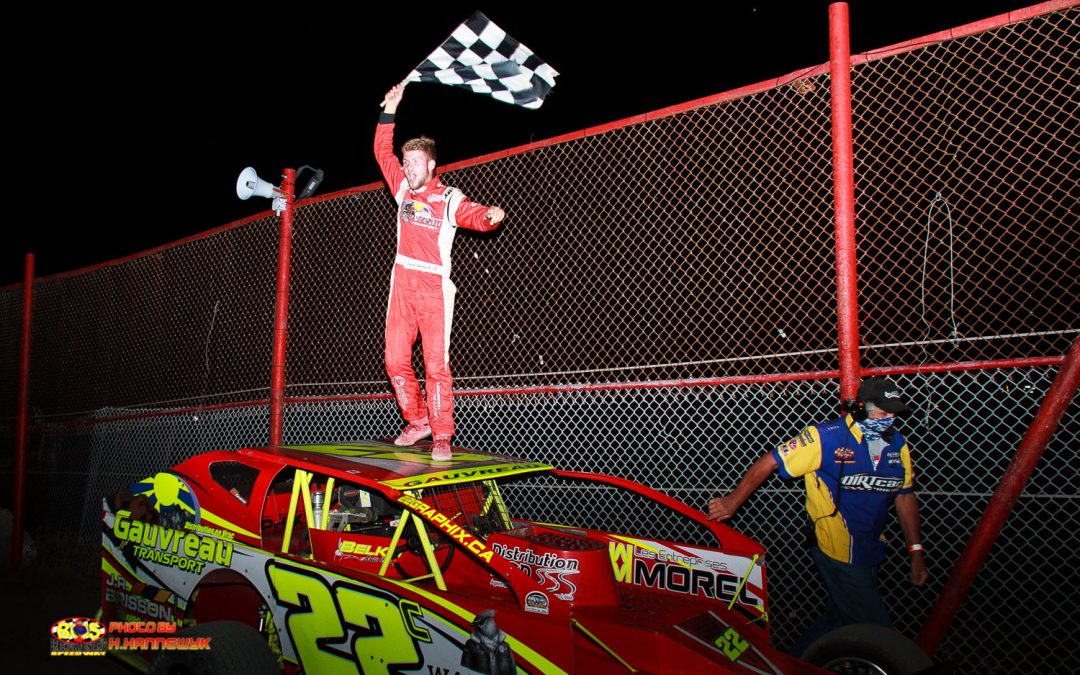 The moment everyone was waiting for at the Brockville Ontario Speedway, opening day finally was able to become a reality as six classes were in action this past Saturday night. With government restrictions being lifted as of this past weekend, up to 100 fans were allowed to take in the action in the grandstands and the drivers were determined to put on one of the best shows in track history.

The Draper Doors Sportsman headlined the night for a 30-lap event which began with four cautions in the opening four laps, all for separate spins. Kalen Draper, Ryan Buzzell and Dylan Kirkland all had problems getting through turn three while Geneva Sheffield lost the handle on her car in turn two. When the drivers settled into a groove and began to click off laps Xavier Andrews led early on but he had a challenger in the form of Cedric Gauvreau. The Chelsea Quebec native moved around Andrews for the lead while Scott McGill took over the 2nd spot by lap 8. Once in front Gauvreau was the dominant force as he pulled away but Johnathon Ferguson was making his way forward. Ferguson took 2nd from McGill by lap 10 and started to reel in the leader as they entered traffic. On lap 14 Domonick Merkley went off the back stretch and the yellow flew again. On the restart Ferguson was able to jump out front and appeared to be the fastest car out there but Cedric Gauvreau would make a come-back. On lap 17 Gauvreau made his way back by Ferguson on the top side to reclaim the lead and begin to pull away with Andrews holding 3rd over Scott McGill and Brent Kelsey moved from 12th to 5th at this point. As the laps clicked off Gauvreau entered traffic again bringing Ferguson, Andrews and Jessica Power to the lead battle. On lap 28 the final yellow flew setting up a key restart. When the green flew Gauvreau was able to get away by two car lengths but Ferguson did not give up. On the final lap heading into turn three Johnathon Ferguson drove deep into turn three but was not able to complete the pass as Cedric Gauvreau charged to his first ever Brockville win and third of his Sportsman career. Ferguson crossed in 2nd with Jessica Power earning the Pirie Insulation hard charger bonus coming from 21st to finish 3rd, Xavier Andrews and Brent Kelsey rounded out the top 5.

In Street Stock action it was Brockville versus Brighton throughout the 25-lap affair and Justin Ramsey was looking for redemption after his Fall Nationals heartbreak a year ago as he took the lead from early pace setter Adam Turner with Shawn Hodge, Todd Raabe and Jeff Humphrey. Ramsey had the fastest car in the early laps and looked to have the race well in hand as he pulled away to nearly a straight away before the halfway point. On lap 13 Ramsey continued to lead but Todd Raabe was on the move jumping to second while behind him Austin Reid was making his way to the front as well as he took over third. On lap 14 Nick Gauvreau experienced problems on the back stretch and the yellow flew. On the restart it was Raabe who took command of the field with Ramsey falling to second over Reid, Wade Purchase and Adam Turner. As the laps wound down Raabe and Ramsey were locked in a great battle for the lead and it would tighten up even more as the yellow flew for Nick Gauvreau again on the back stretch. On the final restart Raabe was able to keep the lead but Justin Ramsey and Wade Purchase made one final charge. Off turn 4 coming to the line Ramsey made the move down low but Raabe kept the momentum and scored the big win over Ramsey, Purchase, Austin Reid and Adam Turner.

The Rookie Sportsman 15 lap event saw a dominant performance by Fire Swamp as he led the opening laps over Andrew Young and Michael McKay. Swamp was on a roll having won the Limited Sportsman feature the previous night at the Can Am Speedway, and was looking to claim his 2nd career win in the same weekend. Young was able to clear McKay for 2nd and started to close in on Swamp as he entered lapped traffic. With 5 to go lapped cars became the only thing that was stopping Swamp as both he and Young were trying to find their way by. With 2 to go Swamp used the extreme outside lane and cleared all traffic leaving Young behind. From there it was no contest as Fire Swamp marched on to his first Brockville win in his first ever start. Over Andrew Young, Michael McKay, Nathan Lambert and Holly Denard.

The Mini Stock event saw James Clarke jump to the top spot in the early going of the 25-lap contest, over Justin Jodin, Tyson Slinger, Jamie Larocque and Dustin Bode. It didn’t take long for the first yellow to fly as Rock St. Amour blew the motor in his machine on lap 3. On the restart it was still Clarke in control over Jodin as these two drivers would drive away from the field, showing they were the cars to beat. Behind them Slinger, Larocque and Bode were locked in a great battle for 3rd, 4th and 5th. On lap 14 the yellow flew again as John Lamarche lost a right front tire heading into turn 4 but was able to drive the car to the pits and get the tire changed. On the restart James Clarke was not challenged as he drove off from the field over Jodin, Larocque, Bode and Jarrod Galway making his way into the top 5 for the first time all night. Over the remaining laps James Clarke was too strong and would drive on to his first Brockville win and remain undefeated in all three Mini Stock features held between Brockville and Cornwall in 2020. Justin Jodin finished 2nd with Jamie Larocque 3rd, Dustin Bode collected the Hard Charger award from G&L Racing for a 4th place run with Jarrod Galway crossing 5th.

In the Vintage feature Sheldon Hoogwerf would use his pole starting position to take the lead early in the 25-lap event but as quick as Hoogwerf got the lead, the yellow would also come out as Tim McColman slowed with a broken front end in turn 2. When the green flew Hoogwerf continued to lead but Jason Powers was right there to challenge. Powers, the 2010 Brockville Speedway Vintage Champion, would make his way by Hoogwerf with Pete Stapper now third over Steve Billings and Randy Gaudet. Powers had the fastest car on track and built up a comfortable lead by lap 12. At the half way point the yellow flew as Pete Stapper spun in turns one and two. One lap later his night came to an end after clipping a tire in turn two breaking the front end. On the restart Powers continued to lead but behind him Sheldon Hoogwerf was getting some pressure from the winningest Sportsman driver in Brockville history Randy Gaudet. These two drivers put on a great battle for the fans with Steve Billing closing in to make it a three-car battle. In the end Jason Powers was too strong as he drove on to the win over Hoogwerf, Gaudet, Billings and Mark Shadwell.

The debut of the 1000 Islands RV Crate Sprint Car division saw 358 Modified driver Luke Stewart take command of the race and put on a clinic as he led the way convincingly over Jacob Dykstra, Brett Stratford, Ryan Hunsinger and Lucas Smith. Stewart had the fastest car on track has he stretched his lead to over a straight away and appeared to have things well in hand on this night as nobody had anything for him. At halfway even traffic proved to be no match for Stewart as he worked through it perfectly leaving Dykstra and Stratford to battle for 2nd. On lap 19 things went from smooth sailing to rocky road as Stewart lost the handle in turn three and sailed off the top of the speedway. Stewart was able to get back in the race but had a lot of ground to cover with 5 laps to go. This left Jacob Dykstra in command over Stratford and Hunsinger. Over the final laps Dykstra stayed smooth and patient as he charged the line to become the first ever Crate Sprint Car winner in the history of Brockville Speedway. Stratford finished a solid 2nd over Ryan Hunsinger, Bryan Cloutier and Luke Stewart fought back to 5th at the checkers.

With our first event of the season complete, staff and management at The BOSS are continuing to put plans together for our second event of 2020. Stay tuned to brockvillespeedway.com for more information. Also be sure to give us a follow on Facebook, Twitter and Instagram, for all the latest news regarding our next race. 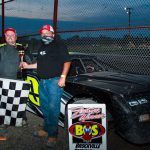 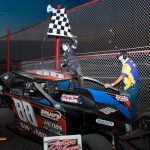 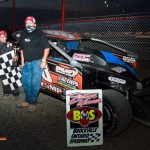 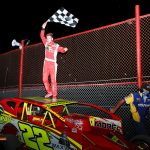 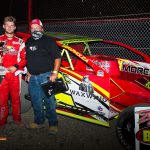 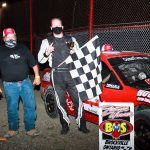 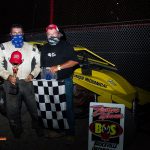 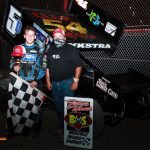