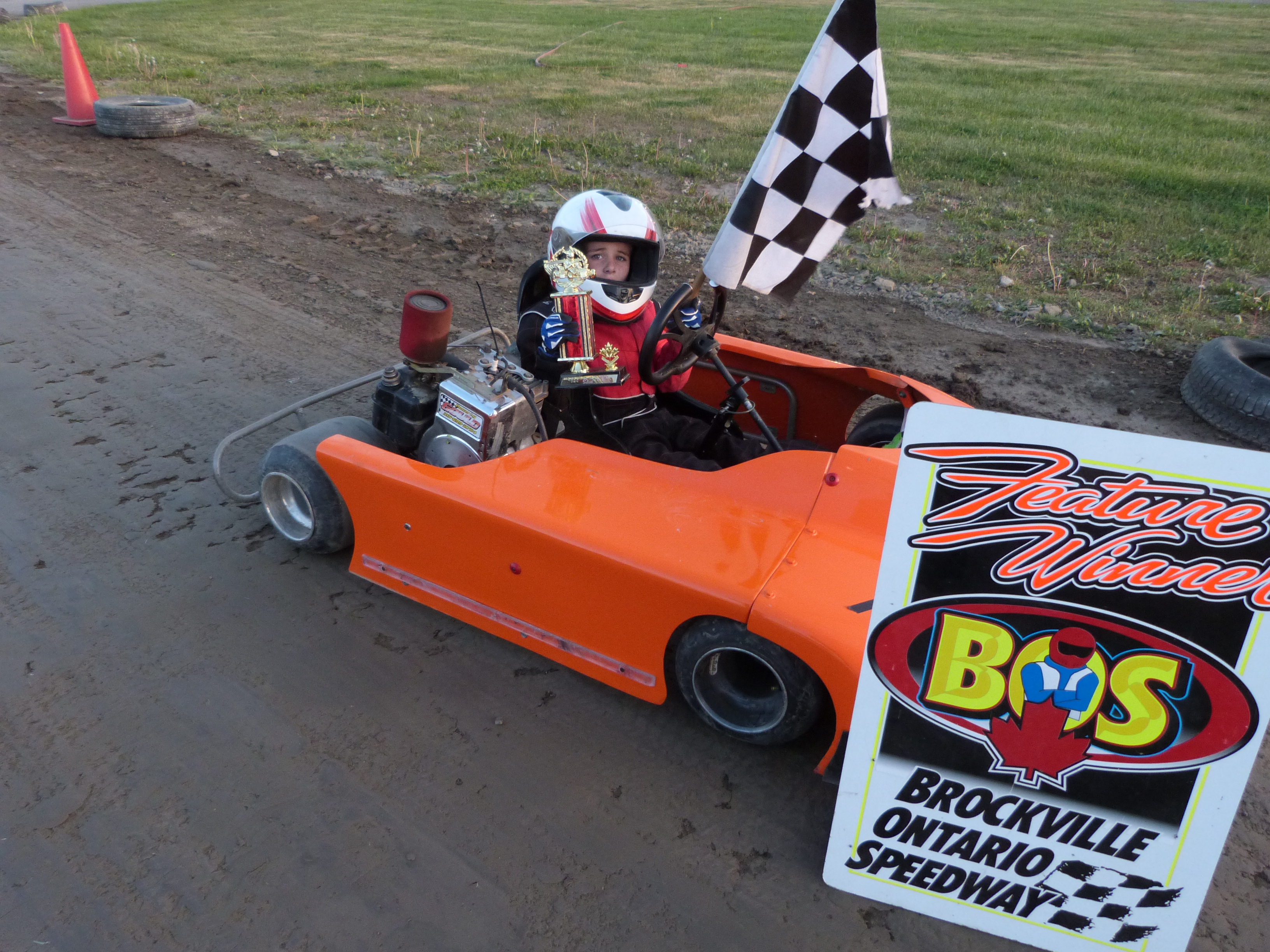 On a picture perfect night for racing 40 karts were ready to tackle a fast race track this past Wednesday night at Brockville. After a long winter off, these drivers were up on the wheel and ready to go racing.

In the First Year Box Stock class Lucas Comeau had a dominant kart through the 10 lap contest. He took the lead at the drop of the green and despite an issue in turn 3 on the final lap, was able to get back on track and score the win while Keegan Elliott, Ella Shipclark and Aiden Berry completing the field.

The 2nd year Box Stock class saw Barron Greer and Dylan Moore battle all race long for the lead. The 2 drivers were the class of the field but in the end Barron Greer held off all challenges and made some great moves in lapped traffic to take the win while Greyson Reddick came home 3rd at the checkers.

The Rookie 1 class was flat out dominated by Braiden Comeau on this night. Comeau took the lead at the drop of the green flag in the 15 lap affair and left everyone in his dust to grab the win over Landon Slinger and Kyle Stewart.

In Rookie 2 it was the “Brennan Moore Charity Classic” as Moore took the lead at the drop of the green and was never challenged during the 15 lap feature as he scored the big win with Kalen Draper and Noah Massey completing the top 3.

In Jr. Sportsman 2 things were a bit different as 3 cautions slowed the event which saw a great battle between pole sitter Nicholas Cordingly, Mason Barkley and Branden Hudson. Hudson experienced late race troubles which saw him fall out of the event late, while up front Cordingly was doing all he could to hold back Braxton Dalessio. On a restart with 2 laps remaining Cordingly was able to get away and pull out to a 3 kart length lead to score the win with Dalessio and Mason Barkley who pulled off a great move in the final corner to round out the top 3.

The Lawn Tractor division was making their season debut on this night. Brock Lama was the early race leader until former Mini Stock driver Ben Nurse took control of the race on lap 5 and drove away to grab his first ever Brockville win over Lama with Matthew Turner crossing in 3rd.

In Jr. Restricted action Christopher Pryor had the fastest kart on the track by far on this night. He took the lead from the pole after winning his heat race and went virtually unmatched leading all 15 laps for the victory with Tyler Morin scoring 2nd and Braxton Dalessio coming home 3rd.

The Stock Light division was dominated by 2 graduates of the Jr. Restricted class with Eric Castonguay and Evan Reynolds pacing the field in 1st and 2nd through the entire 15 lap event. Castonguay had a strong kart and would dominate all night scoring his 2nd ever Stock Light victory having won the Fall Karting Nationals 1 year ago in this class, Reynolds division debut saw him cross in 2nd with Dylan Tinkler crossing in 3rd.

Stock Heavy completed the evenings events and it was a spirited battle at the head of the class as defending track champion Brian Clark was on a mission looking for the opening night win but Mark Greer had other ideas. Greer took the lead late before the yellow flew with 4 laps remaining. On the restart Greer held the lead over Clark and former Street Stock driver Jason Reynolds. Heading to the white flag Greer made 1 mistake in turn 4 allowing both Clark and Reynolds to get by as Greer fell to 3rd. At the finish Clark would hold on for the win over Reynolds while Mark Geer crossed in 3rd.

Next week all divisions will be back in action for a full program, the green flag drops on the first heat at 7pm.