CRAWFORD SCORES THIRD IN A ROW, LADOUCEUR GETS FIRST EVER WIN AT THE B.O.S. KART TRACK ON A HOT NIGHT THAT CHALLENGED MANY! 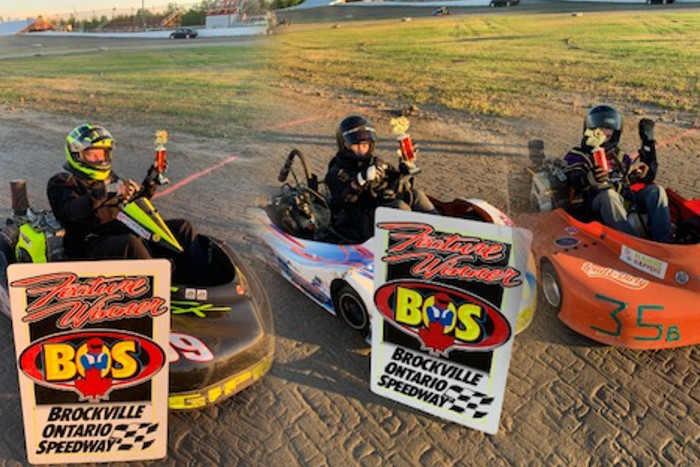 On what was the hottest night so far, the track presented unique challenges to all drivers. The karts once again put on a great show with set-up and skill behind the wheel, on display for all in attendance!

In the Box Stock division, Colby Crawford took the early lead, but was fighting off a constant challenge from Adrianna Winters for the early stages of the race. With the handle going away, Winters lost touch with the leader and would eventually bring out cautions on lap seven and nine. Crawford would hold the lead on both restarts, en route to his third win in as many weeks, with Winters recovering to finish in the runner-up spot ahead of third place Jace Menard.

In Rookie action, Brock Beattie would take the lead on the initial start, from the top side and bring third place starter, Elliot Stacey along with him to the number two spot. Stacey would stalk the 80 ride until taking over the top spot on lap four. Beattie’s frustration would continue as he would eventually spin while in the number two spot on lap seven. Stacey had the best working ride by far as most competitors fought both extremes from loose to pushing on a very slick track. A late caution would set up a green, white, checkered finish. Once again, Elliot would prove too strong and go on to take the win in front of Nolan Chatten and third place finisher, Bryson Winters.

Brennan Moore was the show in Jr. Restricted feature action! He would jump out to an early lead and even with a couple of cautions, go on unopposed to take the win ahead of a spirited fight for the second spot that saw Maddie Wallace spin while challenging for the runner-up position in the middle of turns 3 and 4 as they were coming to the checkers. Maude McCarthy would finish second ahead of Wallace.
In Jr. Clones, Brandon Lazore would take the initial lead form the outside pole, while fourth place started, Chris lough would immediately move to the number two spot. Lazore would hold off Lough early on, but all that would change by lap five when Lazore would move up the track enough to allow Lough to work into the top spot. Lazore would go on to have handling issues and spin off turn 2 on the eighth lap, and again, two laps later. On each restart, Lough was smooth and fast. And would go on to take the win ahead of Blake Smith and pole sitter, Brycen Thompson.

The Sr. Clone feature may have been the best show of the night. Trey Ladouceur, would lead from the pole bringing along Tristan Ladouceur into the second spot. Happy to settle it amongst themselves, the rest of the field had other ideas! A lap three spin saw Marco McCarthy and Aiden Van DeLight have to fire from the rear. Trey would lead the restart, while Jordan Wood, muscled his way past Tristan to take over the runner-up position. From there Tristan would spin with an assist from Brennan Moore. Both would re-start form the back. Trey would lead on this re-start, but get lots of pressure from Wood. After several attempts. Wood would push past Trey. Ladouceur’s apparent frustration, would cost both drivers as they made contact going into turn three and both would have to play catch-up from the tail end of the field on the re-start. This would put Tristan Ladouceur, who earlier had to fire from the rear, after a spin, in the top spot. Tristan would take full advantage and go on to lead while the action for second was fevered. As the checkers waved, Ladouceur would take his first ever win at the B.O.S. with a three-wide battle for second going to Brennan Moore ahead of Jordan Wood and Aiden VanDeLight!

Adam Bailey would lead the Stock division to the green flag and take the initial lead over a very competitive field. A lap two caution, involving Matt Bond and Eric Dinelle, would see Bailey have to fend off challenges from second place Brad Gipson. Adam would slam the door closed every time. As this battle went on, Tim Bailey had joined the fight for the lead and by lap 12 seemed poised to take the number two position from Gipson. It didn’t work, and by the time the leaders came off turn 2, Gipson had assumed the lead! Time would then get by Adam and try to chase down the leader. But Gipson was consistent and would make no mistakes, going on to take the win in front of Tim and Adam Bailey. 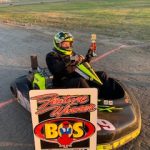 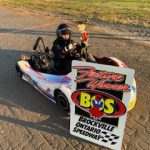 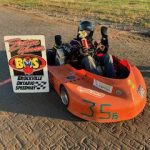