DALE PLANCK STORMS TO 358 CHECKERS AT BROCKVILLE ON CHAMPIONSHIP NIGHT 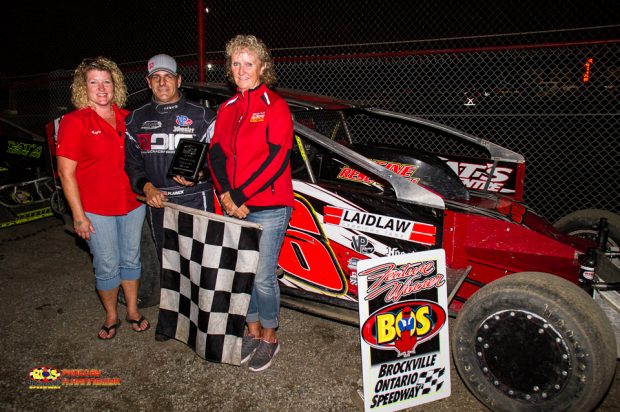 The most anticipated night of the year is also the most unanticipated time of the year as final points were on the line this past Saturday night at the Brockville Ontario Speedway. BOB FM and Brockville Home Hardware were on hand for a night that was filled with emotion.

The 358 Modifieds were ready for battle and Danny O’Brien had nothing to worry about as he wrapped up his 13th 358 Modified title but wanted to go out in style with a big win. Tim O’Brien and John Mulder would pace the field to green as O’Brien would get the early advantage over John Mulder, Jason Riddell, Andy Lloyd and Joe Banks. Tim O’Brien has not won at Brockville since the 2011 season and was driving away from the field until lap 4 when Andy Lloyd slowed to a stop in turn 4 bringing out the yellow. When the green flew O’Brien once again made his way to the lead but Jason Riddell was on a mission and working the outside lane. On lap 10 Riddell was able to make his way to the lead over O’Brien with Chris Herbison Dale Planck and John Mulder completing the top 5. It’s been a season of struggles for Riddell and finally he had car that would run anywhere as he pulled away from the field but “The Natural” Dale Planck was also charging hard and closing fast. On lap 20 Planck took over 2nd from Tim O’Brien in turn 4 bringing Danny O’Brien to 3rd as they tried to reel in the leader. The final caution flew on lap 27 setting up the potential for a great finish. When the green flew Riddell stayed committed to the top as Planck stayed close by in 2nd as Danny O’Brien made an uncharacteristic slip in turn 1 as he slid off the turn ending his shot at victory, he would rebound to finish 10th. Meanwhile Planck was giving Riddell all he could handle, finally off turn 2 Planck made his move to the bottom taking over the lead and would take his first win since the 2012 season on the Bullring at Brockville. Riddell once again claimed a runner up finish with Pat O’Brien, Bobby Herrington and Tim O’Brien crossing in 5th.

In Sportsman action Tristan Draper and Aaron Pugh were the talk of the race in the opening laps as they battled side by side for the race lead with neither driver getting an edge. On lap 7 Draper was able to take control of the field over Pugh, Tyler Reynolds, Kyle Wilson and Shane Stearns. On lap 9 Anthony Rasmussen lost control of his machine in turn 4 bringing out the first caution of the race. On the restart Pugh would take over the lead as Draper tried his best to stay within striking distance. On lap 11 Draper charged to the bottom in turn 3 but would lose the handle on his race car and spin. On the restart Pugh continued to lead but he had a new challenger in the form of Shane Stearns. On lap 13 Stearns took over the lead as behind the top 2 drivers points leader Shane Pecore was doing all he could to keep in front of Dylan Evoy in the chase for the championship. On lap 15 Tyler Reynolds would bring out the final yellow as he spun in turn 4. When the green flew it was a classic battle between Pugh and Stearns as they raced side by side for the race lead with neither driver getting an edge with Pecore, Ryan Scott and Dylan Evoy making up the top 5. On the final lap heading into turn 3 Pugh made a great charge to the bottom but Stearns kept his car wound up on the high lane and would edge out Aaron Pugh to score his first career Sportsman victory by a half car length. Pecore would cross in 3rd and claim his 3rd career track championship while Ryan Scott and Dylan Evoy rounded out the top 5.

In the Street Stock 15 lap contest Nick Gauvreau came into the night 24 points behind Alex Gagnon in the chase for the championship and on this night Nick Gauvreau did all he could in an attempt to grab his first title. Kody Kelly would pace the field in the opening laps as Gauvreau, Tyler Bushey, Michael Dillon and Sheldon Hoogwerf would complete the top 5. On lap 7 Gauvreau would get by Kelly to take over the lead with Bushey following in his tire tracks to 2nd. Meanwhile Alex Gagnon was doing what he had to do as he paced himself towards the back part of the top 10. Over the remaining laps Nick Gauvreau would hold off several challenges from Tyler Bushey and Michael Dillon to record the victory while Kody Kelly and Keith Riddell completed the top 5. Alex Gagnon’s 7th place finish was good enough to take his first Street Stock track title.

In Rookie Sportsman Jacob Clancy had his first title already taken care of and was looking to claim his 4th win of the season. Pascal Racette led in the early going of the 12 lap affair over Derek Cryderman, Matt Barbour, Jacob Clancy and Tyler Parker. On lap 8 Cryderman made his move getting by Racette to take over the top spot with Clancy right behind I 3rd. Over the final laps Cryderman would put the car on auto pilot as he drove away to score his 5th win of the year in Rookie Sportsman. Racette held off Clancy for 2nd while Matt Barbour and Tyler Parker completed the top 5.

The Mini Stock division already saw Bob Ray clinch the title but a big trophy was still on the line. John Lemarche would be the dominant force in the early going but Chris Bakker would end that run as he took over the lead on lap 5 with Cornwall invader Francis Blanchette moving to 2nd around Lemarche with Brandon Henderson and Dylan Kirkland would complete the top 5. On lap 9 Blanchette would make his move to take over the lead as behind them Joe McNichols was on the charge looking for his 3rd win of the year. on lap 12 McNichols made his move to 2nd around Bakker and ran down Blanchette. On the final lap Blanchette slid up the track leaving the bottom open. Off the turn Blanchette shut the door and went on to claim his first Brockville win. McNichols settled for 2nd with Bakker in 3rd. Bob Ray recovered from an early spin to finish 4th with Dylan Kirkland rounding out the top 5.

The Outlaw Vintage Modifieds had a title to decide as 13 points separated Pete Stapper and Josh Powers. On the initial green flag a tangle on the back stretch took out Jason Powers and Pete Stapper on the back stretch. Stapper would have to go pit side which left Josh Powers in the race lead and the title up for grabs. When the green flew Powers would lead the way over Ryan Comeau and Brock Cullen. Powers looked to have the faster car but Cullen was on the move. On lap 8 Cullen made the move for the lead but made contact with Powers in turn 3, Wayne Riddell also was involved and the caution was out. All 3 cars suffered heavy damage but Powers would go pit side and try to make the most of a bad situation. When the green flew Ryan Comeau would hold the lead but veteran Greg Hale was right there to challenge over the final laps. Comeau would hold on to the lead and score his first career win with Brock Cullen charging to 2nd over Hale, Wayne Riddell and Josh Powers. Despite falling out of the race on the opening lap Pete Stapper would be crowned the 2016 Outlaw Vintage champion.

The Bullring at the Brockville Ontario Speedway will be back to racing on Sunday September 18th with the annual Monster Enduro. Racing begins at 1pm.