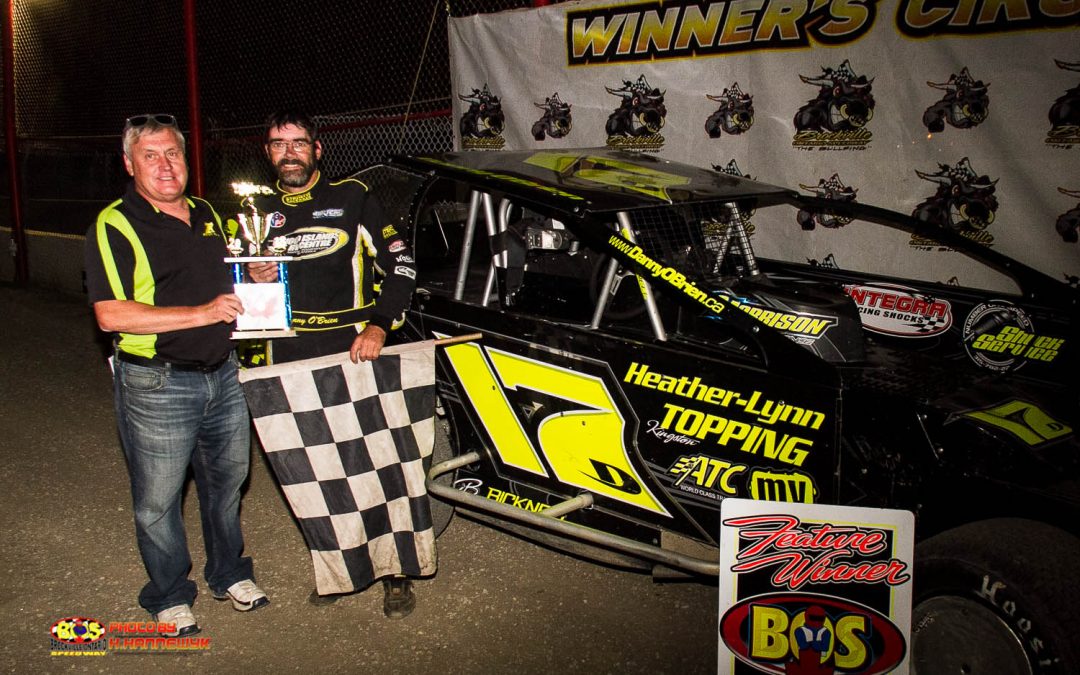 BROCKVILLE, ONT – It was a hot night this past Saturday at the Brockville Ontario Speedway but it didn’t stop the drivers in all 5 classes from giving it their all each and every lap.

Andy Lloyd was the man in charge early on in the 358 Modified 30 lap affair over Tim O’Brien Ryan Poole Jeremy LaSalle and Aaron Pugh. With a fast race track drivers were flying around the top lane of the race track in the opening laps. On lap 5 Mikael Labreche slowed with a problem on the front stretch bringing out the caution. When the green flew it was Andy Lloyd in control again but Tim O’Brien had a little extra as he powered by his fellow Kingston native to take over the lead with Poole, Luke Stewart Danny O’Brien and Andy Lloyd completing the top 5. Once in front Tim O’Brien was absolutely dominant and was looking for his first win in nearly a year but behind him brother Danny was on his way to the front. After rallying from 10th on the grid the 13 time track champion was able to work his way to 3rd by the halfway point after getting by Ryan Poole, then ran down Luke Stewart for the 2nd spot and the battle was on. With 12 to go Tim O’Brien remained in front but Danny was able to take over 2nd on lap 18 and it became a battle of brothers for the win as Luke Stewart, Ryan Arbuthnot and Kyle Dingwall could do nothing but watch. Over the remaining 10 laps it appeared the handling was going away on the younger O’Brien’s ride as Danny started to charge forward. With 5 to go Danny O’Brien made the pass that counted taking the lead down the back stretch and from there it was on to the winner circle for the 5th time in 2018 and 4th in the last 6 races. Tim O’Brien held on for 2nd over Ryan Arbuthnot Kyle Dingwall and Luke Stewart.

Tyler Reynolds took the lead at the drop of the green flag over Dale Gifford Xavier Andrews Chris Ferguson and Johnathon Ferguson. Reynolds lead was short lived on this night as on lap 3 Andrews would use the bottom lane to his liking and take over the lead and begin to pull away as the field behind him was scrambling for position. Johnathon Ferguson was on the move and coming from 6th on the grid was able to run down the leader in a big time hurry. On lap 6 Ferguson took control of the race and began to author a dominating performance with Andrews, Reynolds Jarrett Herbison and Tristan Draper were also on the charge. On lap 10 Xavier Andrews saw his great run go away as he clipped and infield tire which broke the left front off of his car and ending a great run. On the restart Johnathon Ferguson remained in control over Draper, Herbison, Reynolds and Jesse Hudson. Ferguson began to pull away while behind him current points leader Ryan Scott was having an adventurous night. With a fast race car it meant little as he was stuck in traffic the entire race but never gave up as he marched into 5th by lap 16 and was looking for more. On lap 17 Derek Cryderman and Jason Cummings tangled in turn 2 which brought out the yellow. When the green flew it was once again Johnathon Ferguson in control over Tristan Draper and Ryan Scott who made his way to the top 3 and was looking to run down the leader. On this night it was not happening as Johnathon Ferguson made a slight gain in the chase for the title as he scored win number 3 of the season over Draper, Ryan Scott’s wild night ended with a 3rd place effort with Shane Stearns charging from 13th to 4th and Jesse Hudson completing the top 5.

Rookie Sportsman saw one of the most dominant runs this season and it was turned in by Jonah Lewis. The driver who makes the long haul from Tyendinega to be in the field every week, jumped to the lead early on over Michel Fournier and Xavier Perrin in the opening laps. Lewis had the car to beat as he charged away from the rest of the field but behind him Michel Fournier Xavier Perrin and last week’s winner Melissa Gifford were in a fierce battle for position which was playing right into the hands of the race leader. With 5 to go Lewis hand almost a half track advantage as Perrin was finally able to get around Fournier for 2nd leaving him to battle with Gifford for 3rd. In the end Jonah Lewis cruised to the win, his 2nd of the season, over Xavier Perrin Michel Fournier Melissa Gifford and Brock Cullen.

The Street Stock feature saw several yellow flags to begin the event which made it tough for drivers to get a rhythm going. Once the green flag laps started to click off it was veteran Bruno Richard taking the lead away over Michael Dillon, Nick Gauvreau, Tyler Bushey and Sheldon Hoogwerf. Richard made his return to the Street Stock ranks last week and was looking to return to victory lane for the first time since 2014. At the halfway point it was a 4 car break away as Richard, Dillon, Gauvreau and Bushey put on a great show for the fans using the extreme outside lane. Over the final laps Michael Dillon made several runs at the veteran but it was not to be as Bruno Richard took his first Brockville checkered flag since August 30th of 2014. Michael Dillon held on for another runner up finish with Nick Gauvreau finally finishing a feature after many motor issues, he crossed in 3rd. Tyler Bushey had another good points day with a 4th place run and Peter Raabe rounding out the top 5.

The 15 lap Mini Stock event saw Samantha Henderson have a rough night as she tangled with another competitor in turns 1 and 2 which resulted in her flipping over and the red was displayed. Henderson was uninjured but the car was done for the night. When the green flew it was points leader Domonick Merkley taking control of the event over Richard Bartholomew, Jarod Galway, Kurtis Daye and Dylan Kirkland. Merkley who was looking to extend his points lead was doing what he needed to do as he began to put on a dominating performance in the early going eventually building up a full straight away lead. with 5 to go Merkley was in full control of the race as behind him Dylan Kirkland, who made a pit stop on lap 1 was on the charge as he took 2nd from Bartholomew, but had a lot of ground to make up in a very short time to catch the race leader. Over the final laps not even lapped cars could slow him down as Domonick Merkley drove on to score his division leading 4th win of the year in Mini Stock. Dylan Kirkland crossed in 2nd while Richard Bartholomew scored his best ever run of 3rd over last week’s winner Jarod Galway and Kurtis Daye.

This coming Wednesday RTD Trailers will present the first ever Bullringer 110 for the DirtCar 358 Modified North Regional Series with $10,000 on the line to the winner. Also on the card the Sportsman division will be there with 110 lap event which will pay $2000 to the winner making it the richest paying race in over 25 years at Brockville. Many of the top big block modified drivers will be on hand with 358 Modifieds looking for the top prize. With over 40 cars expected in both divisions for the mid week show, there will be plenty of action in store. The green flag drops at 7pm with hot laps and time trials beginning earlier in the night. 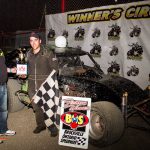 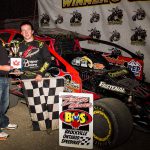 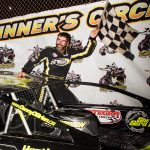 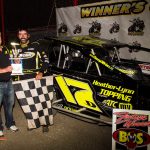 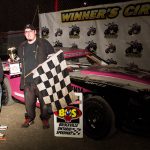 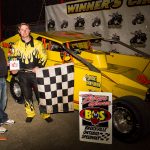 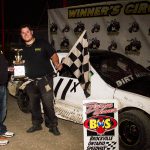