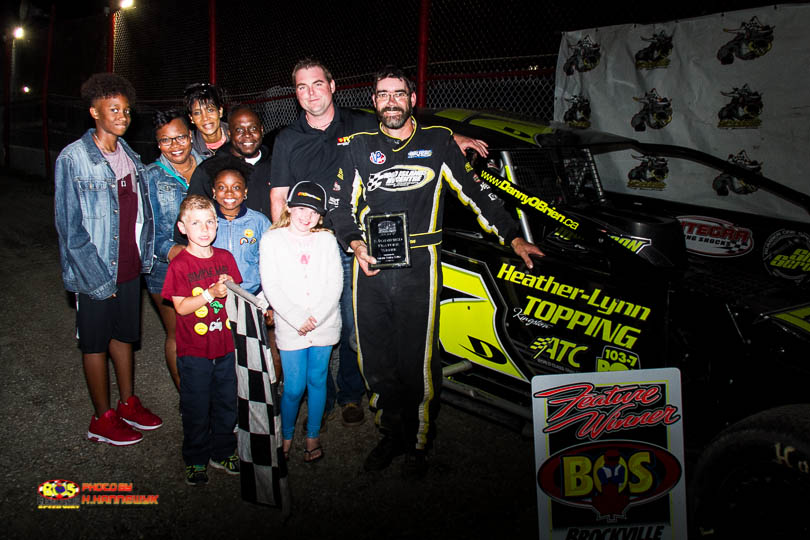 With a different qualifying format this past Saturday night the Modified and Sportsman drivers relied on pure speed all night long. Danny O’Brien found his way back to victory lane for the 3rd time in 358 Modified action. Ryan Scott dominated the Sportsman ranks for the 2nd straight week, Tyler Bushey and Dustin Bode both grabbed their 3rd wins in Street Stock and Mini Stock respectively while Kurtis Cayer scored the Rookie Sportsman win in his first ever Brockville start.

In the 358 Modified ranks Lance Willix and Danny O’Brien picked the best redraw positions as they drew the front row with Willix taking the early lead. over Danny O’Brien, Ryan Arbuthnot, John Mulder and Tim O’Brien. Both Willix and Danny O’Brien would trade the lead several times in the opening 8 laps before Andy Lloyd broke the front end on his car ending his night early. Under the same yellow Lance Willix went pit side for a right front flat tire ending his great run as well. When the green flew O’Brien continued to lead but Ryan Arbuthnot was right there to challenge, as the field completed lap 9 a scary moment occurred in turn 1 as 4 cars tangle sending Roger Levesque upside down. Levesque was able to climb from his car without injury but his race was over. When the green flew O’Brien held a comfortable advantage over Arbuthnot, Bobby Herrington, Tim O’Brien and Kyle Dingwall. As the laps clicked off O’Brien continued to stretch his lead while Arbuthnot did all he could to keep pace with the leader. On lap 17 Lance Willix spun his machine in turn 4 bringing out the final caution of the race. When the green flew O’Brien used the outside lane perfectly as he pulled away from a very fast Ryan Arbuthnot to score his 3rd win of 2017 over Arbuthnot, Bobby Herrington Luke Whitteker and Kyle Dingwall who charged from 13th to round out the top 5.

Domination could be the word used to describe the Sportsman 25 lap feature event. Ryan would charge from his 3rd starting spot to take the lead on the outside from early pace setter Steve Morris with Johnathon Ferguson, Steve Barber and Tyler Givogue giving chase. Once in front Ryan Scott was able to dictate his own pace and that pace was “catch me if you can” as he charged to nearly a straightaway lead by halfway with Ferguson, Givogue, Shane Pecore and Shane Stearns completing the top 5. It seemed like the race would go green to checkered with no issues for any of the drivers in the field. On lap 22 that all changed as Johnathon Ferguson made a costly mistake as he spun off turn 2 while running 2nd, ending his great run. On the final restart Tyler Givogue did all he could stay with the leader but on this night Ryan Scott was too strong taking his 2nd straight Sportsman victory over Givogue, Pecore, Shane Stearns and Tristan Draper who came from 13th to finish 5th at the checkers.

The Rookie Sportsman event saw Joey Paquette jump into the early lead with 2016 Street Stock champion Alex Gagnon chasing him from 2nd. Paquette had a great car in the opening laps but Gagnon was able to get by at the halfway point but Cornwall Speedway regular Kurtis Cayer was also on the move as he took 2nd and closed in on the leader. With 2 to go Cayer was able to drive by Gagnon and would march on to his first ever Brockville Speedway win in Rookie Sportsman. Gagnon held on for 2nd with Joey Paquette crossing in 3rd.

In Street Stock Sheldon Hoogwerf was the dominant car in the early going as he took the lead from his 3rd starting spot. Tyler Bushey who has been the man to beat the last few weeks would close in on Hoogwerf for the lead as these 2 drivers put on a show for the fans. On lap 6 Bushey was able to clear Hoogwerf for the top spot with Keith Riddell, Todd Raabe and Michael Dillon completing the top 5. Over the final laps Tyler Bushey would put on a driving clinic as he pulled away and never looked back as the Ogdensburg NY native would charge to his 2nd straight win and 3rd on the season. Hoogwerf would cross in 2nd with Todd Raabe recovering from an early spin to finish 3rd while Michael Dillon and Keith Riddell would complete the top 5.

The Mini Stock division has been very competitive in 2017 with 3 first time winners. John Lemarche was looking to become the 4th as he charged into the lead with Dylan Kirkland, Melissa Gifford, Chris Bakker and Teddy Baird completing the top 5 early on. Lemarche would lead the opening 3 laps before the yellow flew for Dylan Kirkland as he slowed to a stop on the back stretch. When the green flew Lemarche continued his solid run with Gifford and Bakker working on him for the race lead. At the halfway point the caution flew for Shawn Willigar as he slowed on the front stretch. Under the same yellow Dylan Kirkland’s car erupted into a massive fire. Kirkland was able to bail out of his car without injury but was done for the night. When the green flew Dustin Bode was on the move from 10th on the grid as he quickly made his way to 2nd and was putting the pressure on John Lemarche for the race lead. With 4 laps remaining Bode would get by for the top spot and would never look back scoring his 2nd straight win and 3rd of the year. Chris Bakker would hang on for 2nd with Teddy Baird, John Lemarche and Tyson Slinger completing the top 5.

Next week The 2nd round of the Ogilvie’s Auto and Fleet Quad Crown Series for the 358 Modified and Sportsman will be set to take place along with a full show in all classes and fireworks as well. Special ticket pricing is also available for this big Canada Day event, the more you buy, the more you save. Check out brockvillespeedway.com and the Brockville Speedway Facebook page for more information 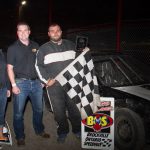 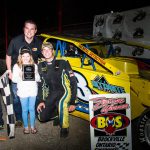 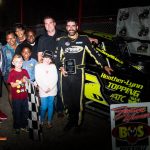 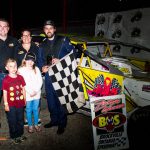 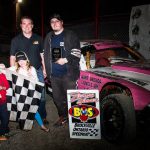