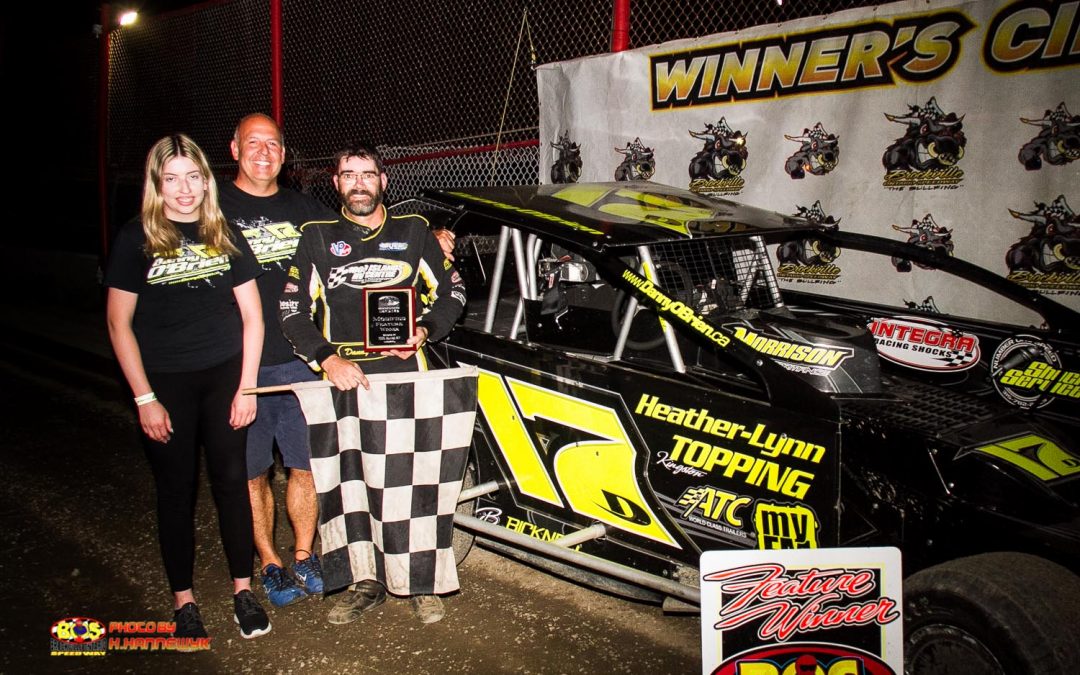 BROCKVILLE, ONT – A Battle of two countries took place last night in the Border Battle Series for the 358 Modified division this past Saturday night. A 4 race series between Can Am Speedway and The BOS featured the best of both tracks and saw a great battle between 2 Brockville regulars for the race win and the title.

The 35 lap 358 Modified feature saw Steve Barber jump into the race lead over Danny O’Brien Aaron Pugh Ryan Arbuthnot and Jeremy LaSalle. The first caution flew early on lap 4 as Chris Raabe slowed with a flat left rear tire setting up a key restart. When the green flew Danny O’Brien went right to work as he charged by Barber to take the top spot away while Ryan Arbuthnot tried to stay within reach of the 13 time champion. With only 6 points separating Arbuthnot and O’Brien for the title it was an absolute must that Arbuthnot stay within 1 spot of O’Brien all night long and that’s exactly what he did as he took 2nd from Barber leaving the top 2 to battle for the race win and the championship. Behind the leaders Kyle Dingwall had made his way from his 7th starting spot to move into 3rd but still had over a straight away to make up on the race leaders. Up front O’Brien maintained a 5 car length advantage but Arbuthnot was able to close the gap as the laps clicked off. With 10 laps remaining the leaders started to enter traffic and the battle was on among the top 2 drivers while Kyle Dingwall Aaron Pugh and Gage Morin held on to the remaining top 5 spots. On lap 29 Arbuthnot tried several times to take over the lead on the bottom but the veteran O’Brien was able to hold on using the outside lane. After a hard fought battle and some clever moves in traffic, Danny O’Brien was able to hang o and score his 3rd win in a row and 4th of the season at The BOS. Ryan Arbuthnot was able to cross in 2nd which was good enough to claim the Border Battle Series Title for 2018. Kyle Dingwall ran to 3rd while Aaron Pugh and Luke Whitteker completed the top 5.

The 30 Sportsman feature was set for battle and Johnathon Ferguson wasted little time getting to the top spot over Shane Pecore Ryan Scott Jesse Hudson and Jarrett Herbison. After a solid season in 2018 Ferguson was looking to add to it with another win but 3 time track champion Shane Pecore had other ideas as he took over the lead on lap 9 and began to open up a sizeable advantage over Ferguson, Scoot Herbison and Hudson. Shane Pecore was running hard around the top side but Ferguson was able to keep him in his sights as the field began to close in on lapped traffic. On lap 12 the top 2 started to pick their way through the traffic and despite some tense moments Pecore was able to keep the top spot while Ferguson remained a close 2nd and was looking for any mistake to get by the race leader while Ryan Scott tried at will to close in from 3rd. On lap 18 lapped cars became a big issue for the leader which played right into the hands of Ferguson as he took over the lead of the race and started to pull away. Once in front Johnathon Ferguson started to put a fair amount of distance, a straightaway to be exact, on the rest of the field with Pecore, Scott, Herbison, and Hudson completing the top 5. Without the help of a late yellow Johnathon Ferguson ran off and never looked back as he scored his 2nd win of the year and first since opening day at Brockville. Shane Pecore scored his 5th top 5 in as many races over Ryan Scott Jarrett Herbison and Jesse Hudson.

The 15 lap Rookie Sportsman feature saw Xavier Perrin take the lead at the drop of the green with Brock Cullen and Melissa Gifford giving chase. After a win, and a memorable rooftop dance to celebrate 2 weeks ago Xavier Perrin had a great race car and was looking to score his 2nd win of the year. Brock Cullen kept the leader close and started to close in as the race got past the halfway point but the caution flew for 2 time race winner Gavin Riddell on lap 13 as he pounded the end of the run 4 wall breaking a tire off his race car. Riddell walked back to the pits done for the night. The restart saw Perrin take the lead and hold of Cullen and Gifford for the top spot but things were about to change in a hurry. Heading into turn 3 Perrin’s car went straight up the track nearly going off allowing Cullen and a host of other to get by heading to the white flag. At the finish Brock Cullen would go unmatched to score his division leading 4th win of the season with Melissa Gifford taking a career best 2nd place effort over last week’s winner Jonah Lewis Gorden Clair and Xavier Perrin.

The Street Stock 15 lap event had a good mix of Brockville regulars and with Mother Nature raining out the Brighton Speedway, the top drivers in their Thunder Car division made the trip which made for a great show. Todd Raabe took control early on in the event and would lead the opening 6 laps as defending track champion Tyler Bushey made his way to the front in a hurry. On lap 7 Bushey used the top lane to take over the lead over Raabe with Justin Ramsey Keith Riddell and Wade Purchase completing the top 5. On lap 8 Todd Raabe and Justin Ramsey tangled bringing out the yellow flag which would give Brighton regular Wade Purchase a clear shot at Bushey for the lead. When the green came back out Bushey held the top spot over Purchase with Michael Dillon charging to the top 3. The yellow flew again on lap 10 as another Brighton regular Adam Wells saw a great run go away as he lost a right rear tire. On the final restart Wade Purchase did all he could to get by defending track champion Tyler Bushey, but on this night tyler Busey proved to be too strong as he charged on to his 2nd win in a row and 5th of the 2018 season. Michael Dillon was able to use the top lane to get by Wade Purchase for 2nd while Sheldon Hoogwerf and Keith Riddell completed the top 5.

In Mini Stock action the Brighton regulars were also in the mix as Tyler French took the lead early on over Logan Woods Dylan Kirkland David Arbuthnot and Tyson Slinger completing the top 5. Tyler French had a great car and opened up a healthy lead as he was looking to make it 2 wins in 2 starts in 2018, while Woods and Kirkland were trying their best to close the gap. On lap 8 Tyson Slinger and Richard Bartholomew tangled ending their chance at a victory. Just 2 laps later Domonick Merkley brought out the 2nd caution as he lost control in turn 4 collecting Jarod Galway in the process. both drivers would end up 11th and 12th on the night. On the restart Tyler French was able to hold on to the top spot over Woods Kirkland Arbuthnot and Brandon Henderson. Over the remaining laps French made it look easy as he pulled away from stellar field to score his 2nd win in 2 tries in the Mini Stock ranks. Logan Woods, Dylan Kirkland, Brandon Henderson and Tyson Slinger would rebound from a mid race accident to finish 5th at the checkered flag.

In Outlaw Vintage it was another classis battle between some of the top drivers in the division with Wayne Riddell leading Paul Billings, Josh Powers, points leader Kenny Polite and Steve Billings. The top 4 drivers put on a fantastic show as Riddell fought off several challenges from Paul Billings and Kenny Polite in the first 10 laps. As the laps wound down Riddell made his car tough to pass as Billing and Polite were in a battle of their own for 2nd. On lap 13 Evan Reynolds spun in turn 2 but the caution was not done there. 1 lap later Pete Stapper spun in turn 3, while Kenny Polite and Paul Billings hooked together on the front stretch which changed all positions but the leader in the top 5. On the final restart Wayne Riddell played it perfect as he held off a stellar father son duo in Steve and Brian Billings to score his first Outlaw Vintage win of the year with Steve and Brian Billings finishing 2nd and 3rd while Pete Stapper and Paul Billings completed the top 5.

Next week The Patriot Sprint Tour makes its first appearance of 2018 for the first leg of the Patriot Sprint Tour Canada Series. Local favorites, Matt Billings, Paul Pekkonen April and Rick Wilson will challenge the tour regulars for the win and Rick Wilson will be looking to defend that big win over Dylan Westbrook in 2017. All 5 divisions will also be on hand along with long time track supporter Tackaberry Construction, plus it is driver autograph night as well. Racing gets underway at 7pm. 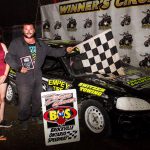 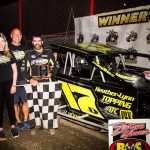 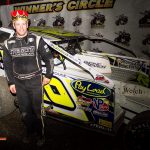 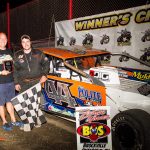 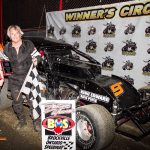 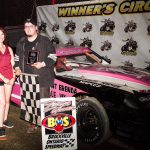 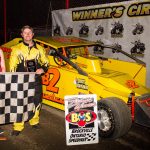