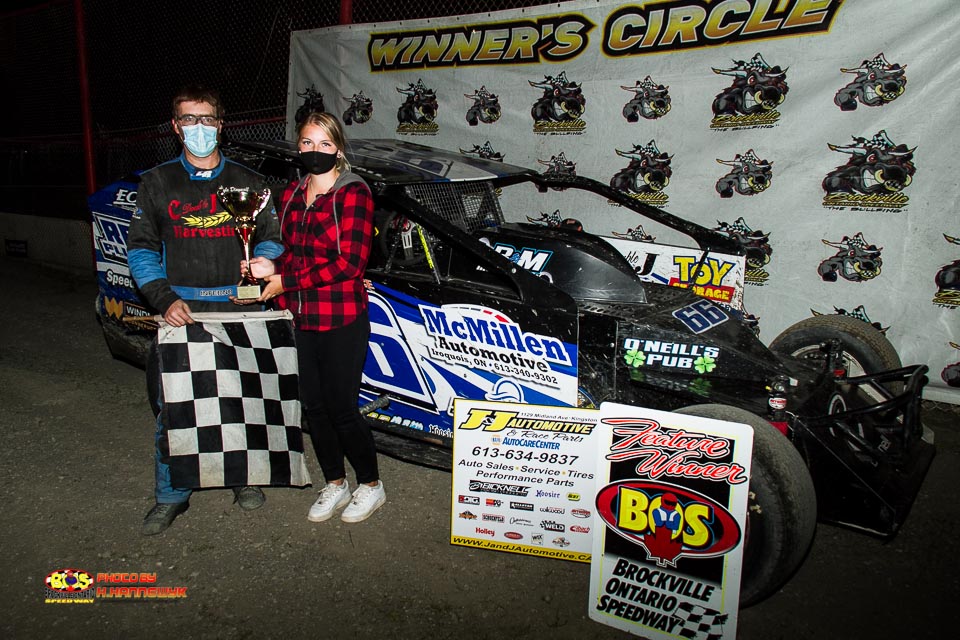 The night began with the first of two held over events from July 24th. The 15 lap Novice Sportsman feature took to the speedway Justin Cyr wasted no time grabbing the lead over Eric Loyer, Brennan Moore, Greg Brinklow and Nathan Lambert. Cyr has been the dominant force in this division all season as he pulled out to a comfortable margin in the early laps. After a caution on lap 3 slowed the race Cyr was able to get a great restart and once again get a comfortable lead. From this point forward Eric Loyer and Brennan Moore were not able to gain ground as Justin Cyr would cruise to his third Novice Sportsman win in a row over Eric Loyer, Brennan Moore, Greg Brinklow and Jordan Wood.

The 20 lap Street Stock event was next up and Todd Raabe wasted no time grabbing the top spot away with Adam Turner, Brock Gregory, Shawn Hodge and Nick Merkley giving chase. Raabe was in complete control of the field as he charged to a huge lead with Adam Turner and Brock Gregory battling hard for 2nd and third. Behind the top three the battle was on for fourth with Shawn Hodge and Brock Cullen. On lap 13 those two would tangle resulting in a flat tire for Cullen, who was forced to the pits. On the final restart Raabe would get a great start and pull away for his 2nd straight win of the year. Adam Turner came across in 2nd over Brock Gregory, Shawn Hodge and Nick Merkley.

The regular scheduled features saw the Mini Stocks hit the track for a 20-lap contest. Kyle Gregory would grab the top spot early and lead the opening 4 laps of the event. The potential shot at a win went away shortly after as he slowed in turns three and four brining out the yellow. Dan Cook would take command of the field on lap 8 and author another dominant performance with Hayden Brown and Jarrod Galway chasing him from 2nd and 3rd. Hayden Brown’s night would come to an end as he lost a motor on lap 12. On the restart Cook led as Galway tried to keep pace. On this night it was not meant to be for Jarrod Galway or any of the top runners and Dan Cook grabbed his 2nd win in a row over Galway, Pierre Picard, Tyson Slinger and John Lamarche

In the opening laps of the 15 lap Novice Sportsman feature Justin Cyr grabbed the lead and seemed destined to sweep the night, with Jordan Wood, Greg Brinklow, Blayden Arquette and Brennan Moore making up the top 5 spots. Cyr would enter into traffic on lap 10, which was exactly what second place driver Jordan Wood was looking to have happen. On lap 12 the leader would tangle with the traffic sending him spinning in turn 4. This left Jordan Wood to battle with Greg Brinklow and Blayden Arquette for the win. On the final restart Jordan Wood laid down the best laps of his young career and would march to his first ever win in Novice Sportsman. Greg Brinklow would finish a strong 2nd over Blayden Arquette, Eric Loyer and Justin Cyr.

Brock Gregory and Brock Cullen had a hard-fought battle during the 20-lap regular night Street Stock feature event. Both drivers raced side by side until lap 8 when they tangled on the front stretch with Gregory getting the worst damage with a flat tire. On the restart Todd Raabe was once again in control of the event, over Cullen and Adam Turner. With a fast car and clear race track Todd Raabe made it look easy as he pulled away to another big lead. Brock Cullen and Adam Turner did all they could to run do the leader, but on this night, Todd Raabe would go unchallenged to sweep both Street Stock events on the night. Cullen and Turner crossed in 2nd and 3rd with Brock Gregory coming from last to finish fourth and veteran Gilles Mongeon completing the top 5.

The 40 lap Ogilvie’s Triple Crown Series for the J and J Automotive Sportsman took to the speedway and the number one question in 2021 has been, can anyone beat Bobby Herrington. At the drop of the green Herrington was showing that the answer was “NO” as he pulled out to a big lead over the field with Tyler Stewart, Shane Stearns, Gabriel Cyr and Jessica Power completing the top 5 early on. Herrington was setting a torrid pace and showed no signs of letting up while behind him Stewart, Stearns and Power were in their own battle for positions in the top 5. Stearns and Power would move to 2nd and third over Stewart but had a long way to go to catch the leader. On lap 28 the big lead Herrington had would go away when the yellow flew. On the restart Herrington once again pulled out to a comfortable lead over Shane Stearns, Jessica Power Gabriel Cyr and Tyler Stewart. Over the final dozen laps Bobby Herrington would drive away from a quality field to claim his 3rd win in a row and 2nd straight Ogilvie’s Series win in as many tries. Shane Stearns finished up 2nd with Jessica Power, Gabriel Cyr and Tyler Stewart rounding out the top 5.

In the 50 lap Ogilvie’s Triple Crown for the J an J Automotive 358 Modifieds Brian McDonald would use the top side of the track to lead the opening 4 laps over Ryan Arbuthnot, Chris Raabe, Dylan Evoy and Kyle Dingwall. It was a great battle among McDonald, Arbuthnot and Raabe as they ran all three lanes perfectly in the early laps. Arbuthnot took the lead and looked to be the driver to beat as he stretched his lead over McDonald, Raabe, Dingwall and Evoy. Once the race was past the halfway point Kyle Dingwall started to pick up the pace as he eventually got around Raabe for 2nd and with the help of a pair of yellow flags, was able to get to the back bumper of Ryan Arbuthnot. On lap 31 Arbuthnot and Dingwall would pull away from the field and make it known that this race would be settled by these two drivers. The top two put on a great battle for the lead but Chris Raabe was waiting for something to happen as he ran in the number three spot. With two laps to go Dingwall would make his move to get alongside of Arbuthnot off turn four. Arbuthnot would fend off the challenges but Dingwall added more pressure at the white flag lap. Off of turn two Dingwall would get the advantage and despite a late charge on the topside Ryan Arbuthnot would come up a half car length short as Kyle Dingwall would grab his first Ogilvie’s Triple Crown win since 2016 and his first win of the year at Brockville. Arbuthnot, Raabe, McDonald and Dylan Evoy would complete the top five finishers.

Next week the J and J Automotive 358 Modified and Sportsman divisions will be back along with the Novice Sportsman, Mini Stock, Street Stock, Vintage and the 1000 Islands RV Crate Sprint Cars. For more information you can check out the website at brockvillespeedway.com. For instant updates be sure to follow the speedway on Facebook, Twitter and Instagram. 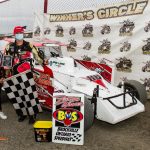 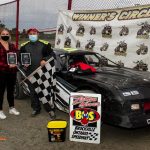 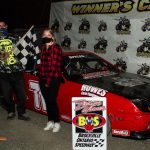 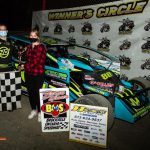 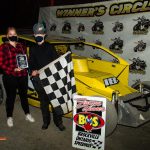 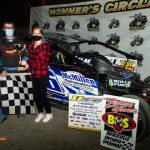