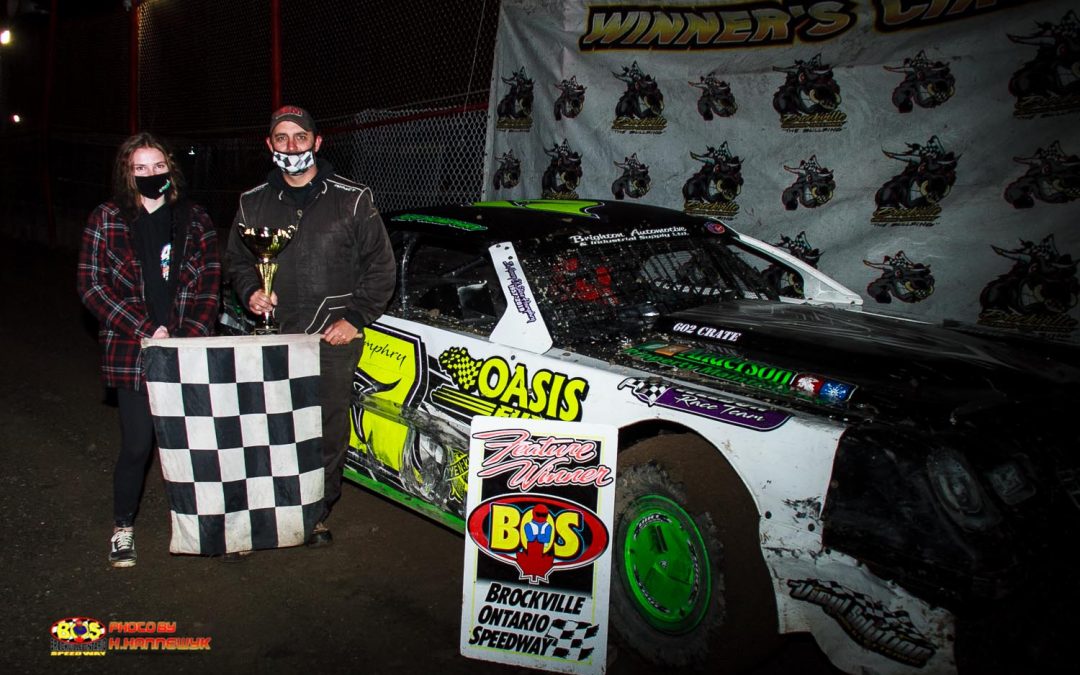 The 12th annual Dirt Outlaw Apparel Fall Nationals presented by Nature’s Reality Botanical Blends, VP Racing Fuels and Hoosier Racing Tires and Sponsored by BOB FM and the Recorder and Times, featured one of the busiest nights in the history of the event. Three regular scheduled events headlined the night, but race fans were also treated to 6 held over events from September 5th. The action did not disappoint.

In the held over 358 Modified feature from September 5th it was Mat Williamson jumping into the early lead in the 50 lap event with Luke Whitteker and Chris Raabe giving chase. The yellow would fly quickly as Ryan Arbuthnot would get turned around on the back stretch and with no place to go, Tristan Draper made heavy contact. Both cars were heavily damaged and were helped to the pits. Both drivers were ok. Mat Williamson seemingly had things going his way until a quick yellow on lap five slowed the field. Williamson, under caution, would slow his car to a stop and have to be pushed to pit road ending his night. This handed the lead to Luke Whitteker and the former track champion and Fall Nationals winner, made the most of the opportunity by pulling away from Chris Raabe, Lee Ladouceur, Mike Bowman and Madison Mulder. Whitteker who had struggled for the majority of the season would dominate the event and survive a late race restart to finally notch his first win of the year. Chris Raabe had his best finish of the year taking 2nd over Kyle Dingwall, Madison Mulder and Chris Herbison.

In Sportsman Jessica Power has had a fantastic season and she was also strong on this night, but Dylan Kirkland would steal the spot light taking the lead over Jarrett Herbison and Power. Herbison would charge to the lead but handling issues would affect his machine as he tried to hold on to the top spot. On lap 10 Herbison discovered the issue with his ill handling, as the right front would go flat ending his great run. Jessica Power took the lead on the restart and was in full control of the field with a fast race car on a very fast track. Johnathon Ferguson also was on the charge as he made his way to 2nd but had some work to do to catch Power. With a great handling car and Johnathon Ferguson not able to close the gap, Jessica Power would dominate the final half of the race, becoming the first two-time feature winner of the season taking the 25 lap event. Ferguson crossed 2nd over Dylan Kirkland, Scott McGill and Gabriel Cyr.

Luke Stewart in 2020 has been the driver with the worst luck when it came to the 1000 Islands RV Crate Sprint Car division as he has been shut out of victory lane all year. In the held over 25 lap event Stewart would jump to the lead over Dave McKnight and Allan Downey. Stewart’s car was on rails and with a fast car and no caution flags, the rest of the field had zero chance of catching the long time Modified driver as he broke through for his first career Crate Sprint Car win in the caution free race. Dave McKnight and Allan Downey filled out the podium.

Fire Swamp had been the story maker in the Sportsman ranks in 2020 and on this night it was no different. Swamp took the lead at the start of the 15 lap event but Andrew Young was putting the pressure on and giving Swamp all he could handle. Despite the efforts from Young, Fire Swamp proved to be too much as he scored his third Rookie Sportsman win of 2020 over Young and Blayden Arquette.

Todd Raabe was looking to keep his great season going and remain perfect on the year but it was Kyle Massey stealing the spot light in the 20 lap event as they held the top two spots with Terry Gorgerat completing the top three in the opening laps. Massey would take the lead from Raabe and was looking to grab career win number one. The veteran Raabe was not about to let that happen as he charged back by the leader with 5 laps remaining and would hold it the rest of the way to score his 4th win in a row. Kyle Massey scored the runner up spot over Denis Hamel, Brock Cullen and Peter Raabe.

Randy Gaudet was the star of the show in the 25 lap Vintage Modified feature, taking the lead early on over Jason Powers and Ryan Comeau. Gaudet and the rest of the top three were very quick and caught lapped cars early, which resulted in an early night for Gaudet, who tangled with traffic ending his night with a broken front end. From here Jason Powers, Ryan Comeau, Josh Powers and Matt Barbour all battled hard for the lead but a fast track and hard racing would cause them issues in turns one and two. While fighting for the lead Powers and Comeau tangled in turn two as Josh Powers snuck by for the lead. Matt Barbour was not able to avoid contact and got collected in the mix up. All three cars were taken to the pits. In the end Josh Powers would lead the final laps in dominant fashion to record another Vintage win in 2020 over Steve Billings and Tim McColman. Kayla Charland claimed top honors as the highest finishing 50s and 60s car.

The Street Stocks kicked off the regular portion of the 12th annual Dirt Outlaw Apparel Fall Nationals and former Sportsman star at Brockville and current Canadian Modified driver at Brighton Speedway Doug O’Blenis was in control, in the same car that carried car owner Jeff Humphrey to the win a year ago, over Adam Turner, Austin Reid, Shawn Gregory and Rob Murray. O’Blenis was determined to get his first ever Brockville win but Adam Turner was hard charging as he put the pressure on O’Blenis in the opening laps. Shawn Gregory was also in the mix as he charged to third making it a three-way battle for the lead as these drivers put on a great show for the fans. On lap 21 the yellow flew as Todd Raabe tangled with Angie Kirby in turn 2 ending their nights and Raabe’s bid for 5 wins in a row. On the final restart O’Blenis was holding the lead while Turner was giving him all he could handle, but on this night, it was not meant to be. After several years of trying Doug O’Blenis finally put it all together claiming the big Fall Nationals Street Stock win over Adam Turner, Shawn Gregory, Peter Raabe and Patrick Easton.

The first ever event for the 1000 Islands RV Crate Sprints took center stage and it was action packed at the start of the night. On lap two Luke Stewart saw his bid for back to back wins go away as he spun in turn two. On the restart Jacob Dykstra had a scary moment as he would get out of shape and flip his car wildly in turn two bringing out the red. Dykstra would climb out without injury. In the midst of all that Nick Sheridan would assume the lead and have a dominant race car over Dave McKnight and DJ Christie. Sheridan who had never seen the track before this night, was driving like a veteran as he pulled away from a quality field. In the final laps Eric Gladhill would make a late race run as he charged to 2nd, but that was as far as he would get in the 25 lap contest. Nick Sheridan drove a perfect race as he became the first ever Fall Nationals Crate Sprint Car Champion. Eric Gladhill crossed in 2nd over Lucas Smith, DJ Christie and Darren Dryden.

After struggles early in the night Jason Powers was looking for redemption in the regular scheduled feature for the Vintage Modifieds as he took the lead with Adam Turner and Sheldon Hoogwerf giving chase. The lead was short lived as Turner, who was hired to driver the Brian Billings ride mere minutes before the start of the heat races, would take the top spot in traffic as he made great move in turn one. Powers was looking to get back to the leader but the laps were clicking off fast leaving little time for him to get there. After a let down finishing 2nd in the Street Stock evet in his own car earlier, Adam Turner would make up for it as the hired gun for the Billings team would notch his first ever Vintage win and first win at the Fall Nationals after years of trying. Powers settled for 2nd over Sheldon Hoogwerf, Tim Hegarty took the Ovide Doiron replica car to a fourth-place finish with Chad Lackie finishing 5th. Pat Charland would be credited with a win as the highest running 50s and 60s machine.

Night two of the Dirt Outlaw Apparel Fall Nationals takes center stage with another seven feature races including a 96 lap Mike LaSalle Memorial for the 35 Modifieds paying $9600 to the winner plus a 50 lap Mike LaSalle Memorial for the Sportsman paying $960 to the feature winner. Both races also have several contingency bonuses as well. Also on the card the Street Stocks are back, Vintage, Action Sprint Tour featuring the 1000 Islands RV Crate Sprint Cars, Quebec Lightning Sprints and Mini Stocks. If that isn’t enough, the Mini Stocks will pull a double dip as they will run their held over feature from September the 5th as well. Seven feature races will surely provide great action, to finish off the 2020 Fall Nationals.

A special thanks also goes out to the following who added contingency bonuses in all divisions for the September 5th show: 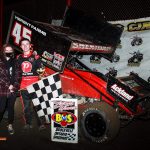 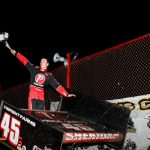 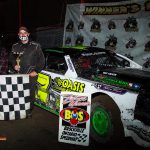 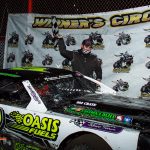 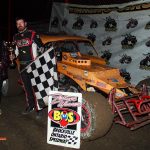 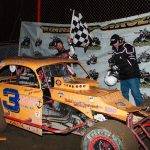 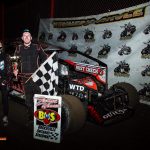 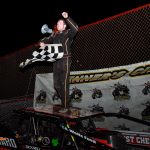 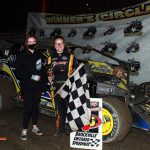 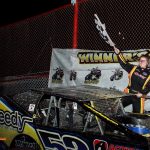 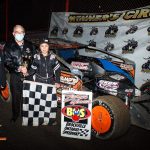 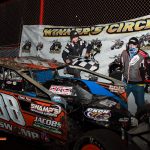 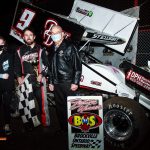 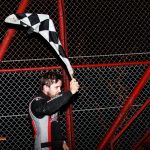 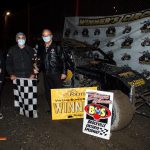