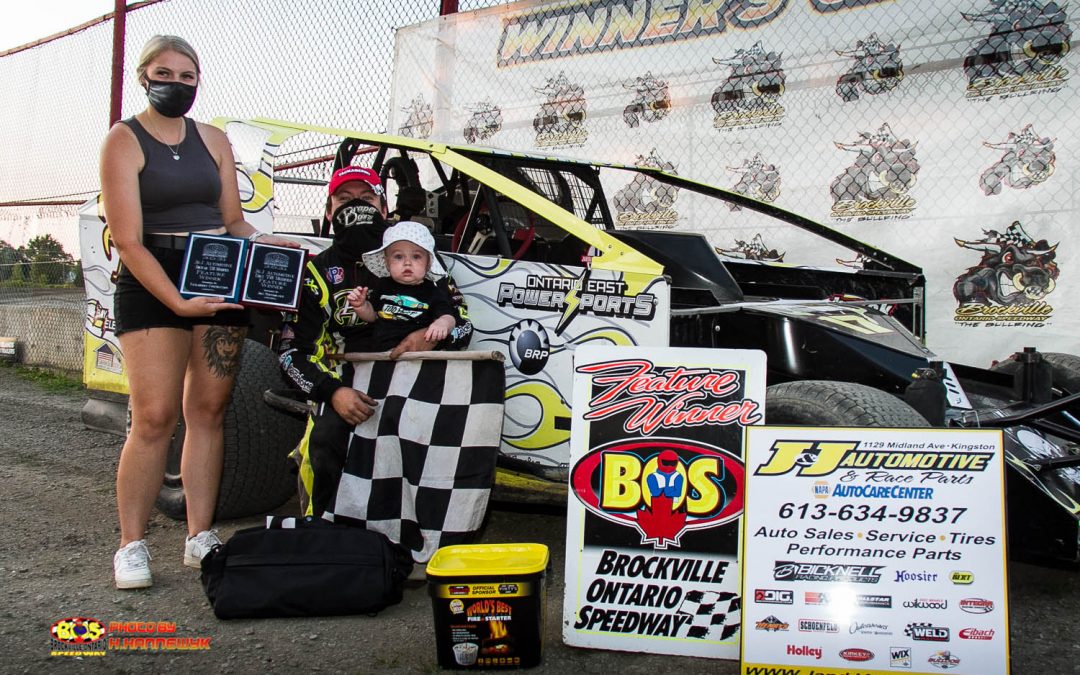 After a few weeks of threatening skies Mother Nature finally blessed the Brockville Ontario Speedway with clear skies. A busy schedule saw make up features for the J and J Automotive 358 Modified and Mini Stock divisions and it was a perfect night for two drivers.

The opening laps of the 20 lap Mini Stock feature from July 24th saw plenty of cautions as many drivers struggled with track conditions in the early going. Dan Cook led early on and looked like he was going to be the driver to beat as he dominated the early laps. On lap 4 Cook got held up in traffic, allowing last weeks winner Hayden Brown to take over the lead with Jamie Larocque, Frank Belair, Tyson Slinger and Matt Boal giving chase. Several cautions slowed the mid point of the race but Brown remained fast and continued his march towards a possible 2nd win of the year. As the laps clicked off Frank Belair, Jamie Larocque, Tyson Slinger and Matt Boal battled hard for a top 5 position, but nobody was catching Hayden Brown as he notched his 2nd win of the year in the held over 20 lap feature. Frank Belair held of for 2nd over Jamie Larocque, Tyson Slinger, and Matt Boal.

In the regular event Hayden Brown was once again the dominant force as he led over Frank Belair, Matt Boal, Jarrod Galway and Marc Andre Voyer. Brown was once again flying around the speedway but behind him teammates Jamie Larocque and Jarrod Galway battled for 2nd with Galway getting the spot, but still had plenty of work to do to catch the leader. As the laps wound down Matt Boal started to make a late race charge as he took 2nd on lap 18 but Pierre Picard was also moving forward into 3rd. Picard would get to 2nd, but that would be it as Hayden Brown would march on to complete the sweep for his 3rd win of the season. Over Picard, Matt Boal, Jamie Larocque, and Jarrod Galway.

The held over 30 lap 358 Modified feature from July 24th saw Tristan Draper take the lead at the drop of the green but problems occurred right away for outside pole sitter Johnathon Ferguson, who slid off the track in turn one. He would rebound for a 6th place finish. Draper would have some better luck as he led the way over Kyle Dingwall, Ryan Arbuthnot, Gage Morin and Brian McDonald. The bottom of the speedway proved to be the quick way around as Draper never left the inside lane through much of the event with Dingwall and Arbuthnot trying figure out a way by. Just past halfway Draper continued his strong run and was in a great spot to score his first win since 2019. On lap 22 Brian McDonald had problems in turn two and ended up on the tow truck and back to pit road. On the final restart Tristan Draper was not to be denied as he held off a determined Kyle Dingwall and Ryan Arbuthnot to collect his 2nd career 358 Modified win. Chris Raabe charged to 4th with Dylan Evoy scoring another 5th place finish.

In the regular scheduled 358 Modified event Tristan Draper would once again find himself at the head of the field over Brian McDonald, Gage Morin, Ryan Arbuthnot and Johnathon Ferguson. The track was different from feature number one with everyone now running the extreme outside lane which worked out great for some, but for Lee Ladouceur it didn’t work out so good, as he slid off turns 3 and 4 on lap 7. On the restart Draper was once again up to the task as he held off Ryan Arbuthnot and Brian McDonald to pull away to a comfortable lead but Ryan Arbuthnot was on the move. After taking 2nd from McDonald, Arbuthnot would run down the leader making it a two-car battle for the win. Draper was in complete control and had a perfect race car on this night after struggles one week ago. In the end Ryan Arbuthnot’s hard charge was not enough as Tristan Draper swept the night and became the season’s first two-time winner in the J an J Automotive 358 Modifieds. Arbuthnot crossed the line 2nd over Brian McDonald, Gage Morin and Kyle Dingwall.

Many major stories were taking place in the J and J Automotive Sportsman division. In an early heat race accident, the undefeated Bobby Herrington would be forced to borrow a car to do a lap to get points for the night. The second major story happened after the checkered flag flew resulting in a different outcome at the finish. With all that happening Jarrett Herbison was once again a factor as he led the way early with Ricky Thompson, Shane Stearns, Jessica Power and Josh Kirkland making up the top 5 early on. Many drivers had found the bottom lane was the place to be which was working great for Herbison as he was still searching for his first Brockville win of 2021. Jessica Power was also on the move as she charged to 2nd around Stearns and quickly closed in on the race leader but Ricky Thompson was on the move as he took the third spot. With 10 laps to go Doug Buzzell made contact with the wall bringing out the yellow. On the restart Ricky Thompson found speed as he swung to the high lane and charged by Power for 2nd and was on his way to the lead. On lap 21 Thompson would take the top spot and would lead the rest of the event and crossed the finish line first. However, a post-race weight violation would make Ricky Thompson wait another day to get his first Brockville win. This would bring 2nd place finisher Jarrett Herbison to victory lane as he would be credited with his first win of the season. Jessica Power would move to 2nd with Dylan Kirkland, Dan Ferguson and Domonick Merkley completing the official top 5.

In Novice Sportsman Justin Cyr was once again making headlines as he led early on but had some company in the form of Noah Mamo as they battled for the lead through the 15-lap event. Cyr was able to work through traffic with no issues and pulled away from Mamo while Brennan Moore, Greg Brinklow and Jordan Wood tried to keep pace. Without the help of a caution flag Justin Cyr would continue his domination in the Novice Sportsman division claiming his 4th win in 6 events at Brockville. Noah Mamo’s debut would result in a heat win and a 2nd place finish in the feature. Brennan Moore, Greg Brinklow and Jordan Wood completed the top 5.

The 20 lap Street Stock feature saw trouble at the start as Adam Switzer lost the handle on his machine as he spun which brought out the yellow. Once the laps clicked off Todd Raabe was the driver in charge as he led comfortably over Brock Cullen and Brett Horner. Raabe was perfect on this night as he worked the bottom lane and pulled away to well over a straightaway while Cullen, Horner, Shawn Hodge and Keith Riddell were all searching for speed. As the laps clicked off and no caution flag to bunch up the field, Todd Raabe would make it look very easy as he would notch his 4th win of the season in just 5 starts at Brockville in dominant fashion. Brock Cullen would cross in 2nd over Brett Horner, Shawn Hodge and Keith Riddell.

Next week the Action Sprint Tour will invade the Brockville Ontario Speedway and will be set to take on our on Brockville Speedway 1000 Islands RV Crate Sprint Car regulars. Also on hand will be the J and J Automotive 358 Modified and Sportsman divisions along with Novice Sportsman, Mini Stock and Street Stock. Racing begins at 7pm. For ticket information be sure to check out our website at brockvillespeedway.com. For up to date and breaking news at the speedway, be sure to give up a follow-on Facebook, Twitter and Instagram. 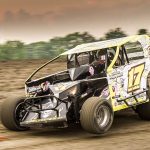 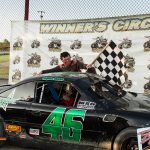 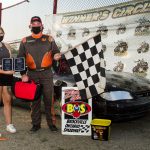 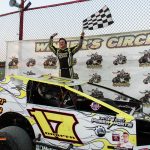 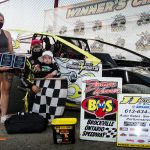 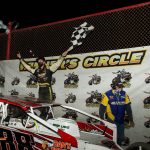 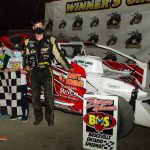 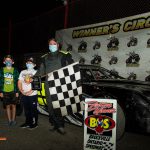 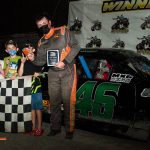 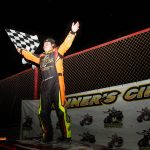 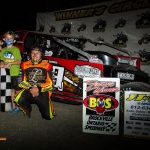 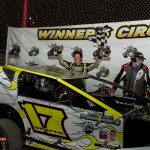 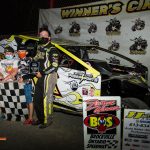