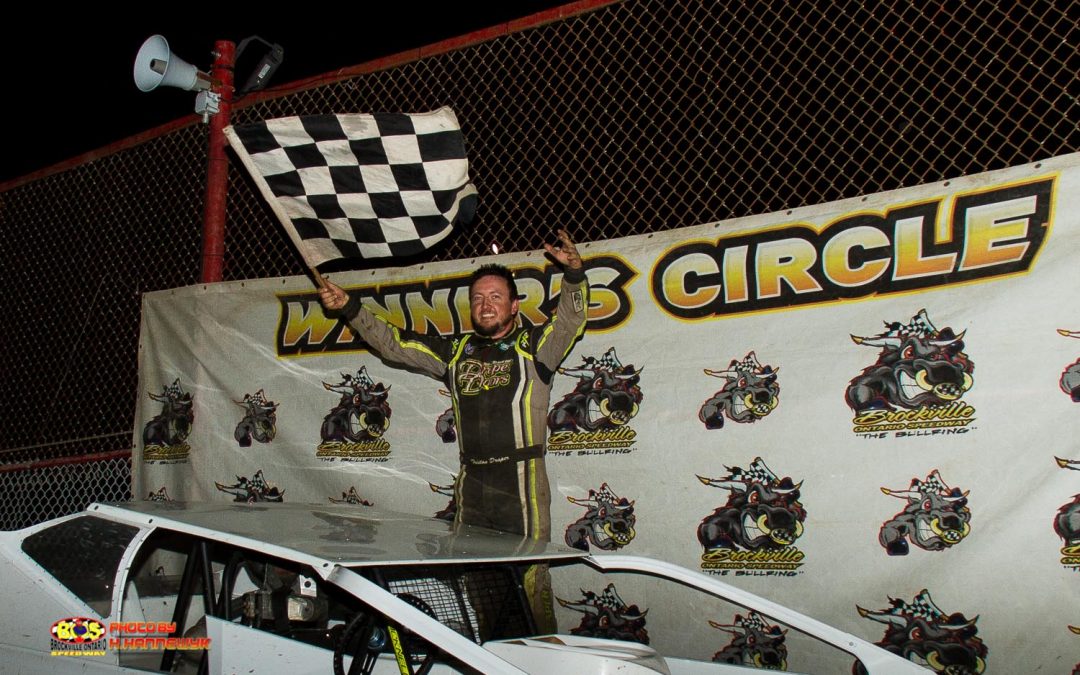 It was a hot night both on and off the race track at the Brockville Ontario Speedway this past Saturday night. Temperatures reached near 40 degrees Celsius, but drivers in all six divisions were up to the task to beat their competitors and the heat as well.

The Street Stocks saw an exciting finish in their 12-lap feature event on Greenshield Pest Control night. Francis Gauthier led early on and was looking for his first ever win, with Brett Horner, Todd Raabe, Peter Raabe and Kraig Handley right there to challenge. Gauthier had a strong car and was holding off some of the best drivers in this division. As the laps clicked off Gauthier looked in great shape as the field was coming to the white flag. However heading into turn three Gauthier slipped up the track, allowing Horner to get by for the lead. Horner would lead the lap that counted as he scored his 2nd win of the season, over Todd Raabe, Peter Raabe, Kraig Handley and Steve Brady. Gauthier wound up 6th at the finish.

Michael Dillon led the early laps of the 25 lap DIRTcar Sportsman feature, over Ricky Thompson, Shane Stearns, Domonick Merkley and Brennan Moore. Dillon, the 2018 Street Stock champion, was running well, using the inside lane to hold on to the lead. As the race neared the halfway point, Shane Stearns started to charge forward as he took second from Thompson, then ran down Michael Dillon for the lead. On lap 13 Stearns used the bottom lane to take over the top spot and looked to be on his way to victory. As the laps clicked off, defending track champion Bobby Herrington was making a late race charge as he moved to second with four laps left, but still had some ground to make up on Stearns. Herrington would get to within two car lengths, but that was as close as he would get. Shane Stearns would end a winless drought that dated back to September 3rd of 2016, his only career win, as he scored his first of this season. Bobby Herrington, Ricky Thompson, Domonick Merkley and Xavier Andrews completed the top 5.

Madison Mulder has been fast all season an on this night, he took the lead in the early laps of the DIRTcar 358 Modified feature over Tristan Draper, Jeff Sykes, Ryan Arbuthnot and Kyle Dingwall. The yellow would come out early in the race on lap 7, as Lee Ladouceur would slide off the track in turn 4. On the restart Tristan Draper, who was debuting a brand new Bicknell chassis along with brother Kalen, would take over the lead, while behind him, some of the top drivers in the points were also moving forward. Ryan Arbuthnot, Chris Raabe and Kyle Dingwall would make their way into the top 5 by lap 12. Draper would use his favorite line, the top side of the speedway, to hold on to the lead, but Chris Raabe would start to charge forward. Raabe would take the second spot from Ryan Arbuthnot, using the bottom and quickly ran down Draper for the lead. On lap 24 Raabe took it away and appeared like he was on his way to another win. However heading into turn 1 Raabe jumped over the cushion, allowing Draper to get back by, but it was far from over. Kyle Dingwall started to charge forward and challenged Draper for the lead. Lapped cars came into play as the leaders raced three wide on the final lap, with traffic in the mix. Coming off turn 4 Draper had just enough to stay in front of Kyle Dingwall, to record a hard fought first win of the season. Dingwall, Arbuthnot, Johnathon Ferguson and Chris Raabe, who rebounded from the mistake in turn 1 with 6 to go, completed the top 5.

In the 20 lap Vintage Modified feature for the cars of the 70s and 80s, Wayne Riddell led the first part of the race, with Grandson Gavin Riddell and Steve Billings putting the pressure on. As the top three battled for the lead, Chad Lackie and veteran Randy Gaudet were on the move as they joined the battle, making it a 5-car fight for the lead. On lap 13 Gavin Riddell would make his way to the lead with Steve Billings taking second. One lap later Steve Billings took control of the race and appeared he would be the car to beat. But on lap 17 the great run ended as he broke in turn 2. On the final restart Gavin Riddell would drive away to his second Vintage Modified win of the year. Chad Lackie, Randy Gaudet, Wayne Riddell and Paul Billings completed the top 5.

The cars of the 50s and 60s took to the speedway next for a 15-lap feature and it did not lack in excitement, as 4 cars were in a battle for the lead. Pat Charland led the early laps over Joey Hilts, Pete Stapper and Greg Hale, who landed in victory lane in this division the previous Friday night at Can Am. These 4 drivers put on a great side by side battle for the lead and thrilled the crowd on a hot night. Charland held a slight lead but Hilts was putting in a solid effort on the bottom, as the laps clicked off. On the final lap Charland and Hilts continued their side-by-side battle for the win. Off turn 4 Hilts got a slight edge and at the line by inches, it was Joey Hilts collecting his third win of the season. Pat Charland, Pete Stapper, Greg Hale and Dexter Billings finished out the top 5.

The night concluded with a 12 lap Novice Sportsman event and it was an emotional night for Stephane Fournier. After a season of struggles, he got some advice from his father, who recently passed away, to keep racing. That’s exactly what he did as Fournier held the lead over Mario Dupuis and Shawn Hodge. Fournier would hold a comfortable 4 car length lead in throughout the race as Dupuis and Hodge did all they could to catch him. On this night Stephane Fournier finally got things to go his way, as he would take the advice from his dad, to score his first ever win with Mario Dupuis, Shawn Hodge, Paul Donnelly and Marco McCarthy rounding out the top 5 finishers.

Next week It’s round number two for the Oglvie’s Auto and Fleet Triple Crown Series for the DIRTcar 358 Modified and DIRTcar Sportsman plus Novice Sportsman and the return of the Supernant Truck Shop Mini Stocks and 1000 Islands RV Crate Sprints. Racing begins at 7pm. 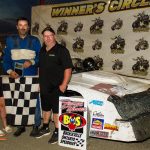 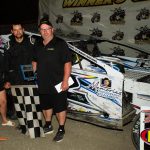 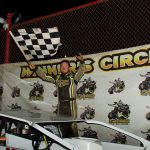 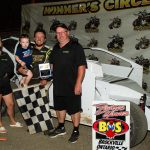 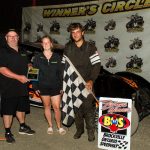 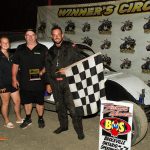