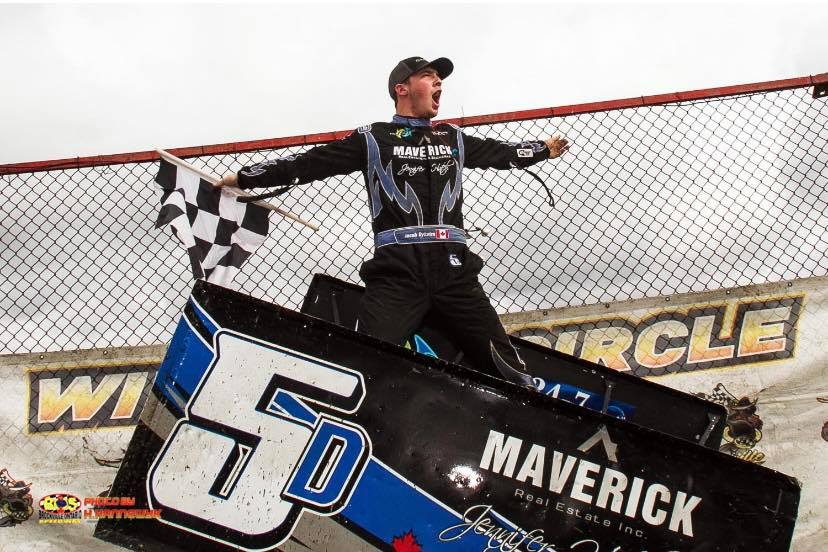 Following a Saturday of nothing but rain and more rain the Dirt Outlaw Apparel King Edward Auto Parts Fall Nationals was ready to go this past Sunday at the Brockville Ontario Speedway with a full program of racing plus the held over Action Sprint Tour 25 lap A-main from Friday night.

Points leader and 10 time winner on the tour in 2021, Jacob Dykstra led the way on a slick race track over Brett Stratford, Eric Gledhill, Johnny Miller and Nick Sheridan. Dykstra was fast in the early laps and continued his domination as behind him Nick Sheridan was on the charge as well. Sheridan was looking for his second Fall Nationals win, claimed the 2nd spot on lap 4 with Eric Gledhill taking the third spot. On lap 10 Sheridan, who was running the extreme outside portion of the speedway, lost it off the top side of the speedway in turn 2, allowing Eric Gledhill to take 2nd. Meanwhile leader Jacob Dykstra was working traffic to perfection, but on lap 16 things nearly ended in disaster as a multi car spin in turn 4 collected Dykstra as he spun to avoid hitting anyone. Dykstra was able to keep moving and was able to hold the lead and motor on before the caution flag flew. It proved to be a winning move as on the final restart Jacob Dykstra was able to pull away and go unchallenged to record his 2nd Brockville win of the season, his 11th Action Sprint Tour win of the year and the 2021 series championship. Eric Gledhill held on for 2nd over Nick Sheridan Brett Stratford and 2021 1000 Islands RV Crate Sprint Car champion Matt Billings.

The regular portion of the program was just underway as J an J Automotive DIRTcar 358 Modified heat events were complete along with three heats in the Action Sprint Tour. When the J and J Automotive DIRTcar Sportsman came to the track for heat number 1, Mother Nature made her return to the speedway and delayed the program. Despite several attempts by track crews to get the speedway back in racing condition, Mother Nature would end up the winner as officials were forced to cancel the program, which will be made up in the spring of 2022, with a date to be announced.