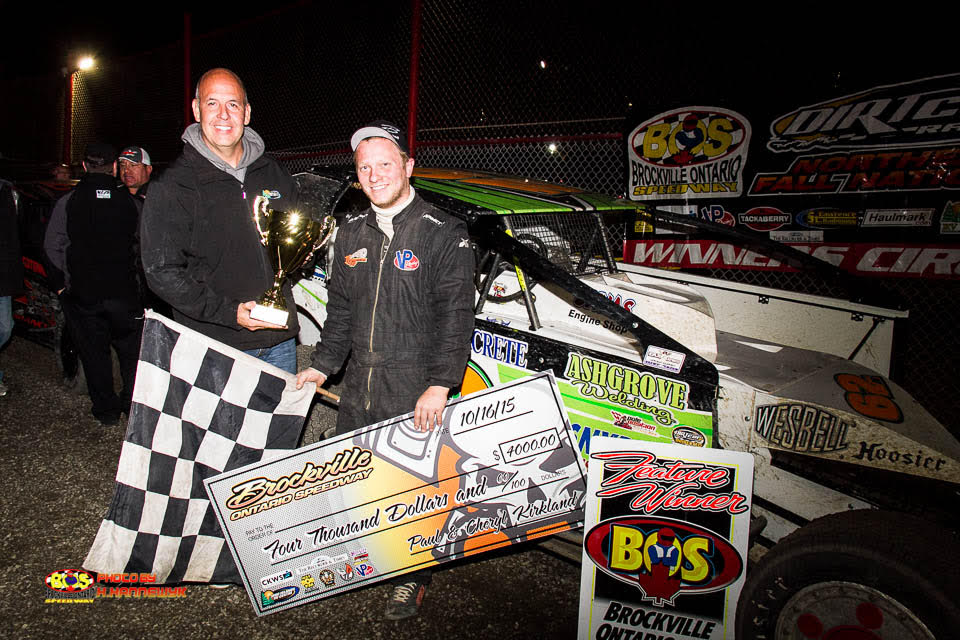 It’s tough enough to win once during the 1000 Islands RV Fall Nationals much less 2 times. Erick Rudolph showed that it can be done, after an impressive win on Friday night in the 358 Super DirtCar Series event, Rudolph took his dad’s prepared ride to his 2nd career Big Block Modified Super Dirt Car Series win, joining Danny Johnson as the only 2 drivers to win both 358 and Big Block events in the same weekend.

Rudolph had a great starting spot in the 100 lap event as he fired from the 6th position on the grid. Stewart Friesen used his outside pole starting spot to take over the top spot early on and looked to have the car to beat as he dominated the opening laps over pole sitter Jimmy Phelps, Danny Johnson, Carey Terrance and Rudolph.

In the opening 20 laps Friesen was making his car fly around the outside lane but behind him Erick Rudolph was making a charge in his small block powered ride taking 2nd on lap 19 from Phelps and quickly running down the leader.

As the top 2 drivers battled for the lead Matt Sheppard was also on the move as he grabbed the 4th spot on lap 26 and was looking to keep the leaders in sight.

On lap 27 Rudolph put his Bicknell chassis to the outside lane as he took over the top spot after a close battle with Friesen while Danny Johnson also moved in to contention with Sheppard and Carey Terrance rounding out the top 5.

Once in front Rudolph was able to maintain a 2 second advantage as the track began to take on rubber which made it difficult to pass on the speedway and gave the advantage to Rudolph.

As the laps wound down Rudolph’s machine appeared to slow as Sheppard made a series bid for the lead by lap 90. Sheppard tried several times to get by on the bottom in turn 1 and 2 but was unable to do so as Rudolph tried desperately to hang on. After his first career win at Autodrome Drummond in 2014 Erick Rudolph held off all challenges from Matt Sheppard and survived several late yellows, to record his 2nd career series win and a little redemption after his heartbreaking loss at Weedsport in August. Sheppard came home 2nd for the 5th time this year with Danny Johnson taking his small block to 3rd while Stewart Friesen and Larry Wight crossed 4th and 5th.

In the Sportsman Super DirtCar Series a tight battle for the title between track champion Shane Pecore, Humberstone Champion Brad Rouse and RD3 Ronnie Davis III was set to be decided. A total of 37 points separated these 3 drivers and all 3 were poised to claim the title.

Louie Jackson Jr. was not at all concerned with points as he jumped out into the top spot at the drop of the green flag over Martin Pelletier, Ryan Scott, Brianna Ladouceur and Jessica Power.

Jackson would lead the opening 11 laps before the first of 3 straight cautions would fly. First Thomas Cook lost the handle on his machine in turn 3, on lap 12 Felix Murray spun off turn 2 and then on lap 13 Brad Rouse and Jarrett Herbison both spun off the back stretch. After that brief flurry of caution flags the top 5 remained the same as Jackson continued his strong run as he would pull away from the field.

As the race came to half way Jackson was getting into a rhythm which made things difficult for Pelletier, Scott, Ladouceur and Power to keep pace.

On lap 25 a scary incident occurred in turns 1 and 2 as 7 drivers piled up in the corner blocking the entire track. The red flew but all drivers were ok and many were able to continue on in the race.

On the restart Jackson continued his pursuit of his first tour win as Brianna Ladouceur made her way to 2nd with Tyler Givogue moving to 3rd. Over the remaining laps Ladouceur moved in and tried to take over the race lead. After many 2nd place runs, Louie Jackson Jr. was not to be denied as he led all 50 laps to score his first career Sportsman Super DirtCar Series win. Brianna Ladouceur scored her best tour finish of 2nd with Tyler Givogue, Jessica Power and Ryan Scott crossing in 5th. Shane Pecore’s 6th place run was more than enough to hold off both Ronnie Davis III and Brad Rouse to claim his first career Sportsman Super DirtCar Series title.

In the Outlaw Vintage 15 lap affair Nathan Berry was looking to make his debut a good one as he took his new ride to the head of the class with veteran Brian Comeau giving chase. Berry would lead the opening 7 laps before Wayne Riddell and Luke McKinnon came together in turn 1 bringing out the yellow.

When the green came back out Brian Comeau was doing all he could to get by Berry. On lap 11 Comeau saw the opening as he took over the top spot and after winning the Applefest Shootout at Brighton in September, Brian Comeau would cap off the year claiming his first ever 1000 Islands RV DirtCar Northeast Fall Nationals win. Nathan Berry’s Vintage debut resulted in a 2nd place effort while Brock Cullen Luke McKinnon and Kevin McKay rounded out the top 5.

The 40 lap Mini Stock finale saw a big case of yellow fever as many cautions plagued the opening 10 laps of the event. Once things got going Joe McNichols would take over the top spot with Mike Gaucher and Riley Greer giving chase.

As the laps clicked off McNichols was looking to cruise to an easy win but with 5 to go disaster struck for Riley Greer as he slipped off turn 2 which sent his car barrel rolling a total of 8 times in turn 2 and the red flag came out. After a hard hit Greer was able to walk away under his own power but his shot at victory was gone away.

When the green flew nobody had anything for McNichols as he drove away to claim his 3rd feature win in 4 tries at Brockville. Mike Gaucher, Logan Woods, John Lemarche and Alexis Charbonneau would complete the top 5.

The staff and management at “The BOS” would like to thank everyone who helped make the 1000 Islands RV DirtCar Northeast Fall Nationals presented by St. Lawrence Radiology and RezX Racing a success. From the drivers to the great race fans we thank you for your support in 2016 and look forward to a successful 2017 season.