Ferguson and Bushey Score Wins, Root and Beauchamp are Champs at Brockville 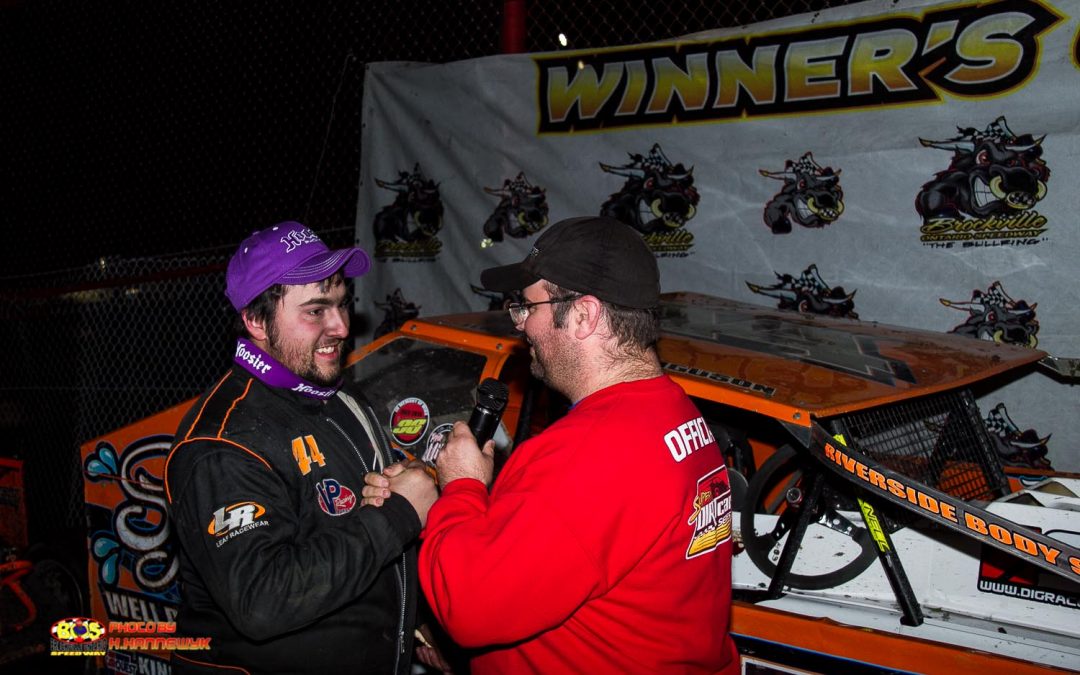 BROCKVILLE, ONT – The 11th annual Loud ‘n’ Dirty Brand Fall Nationals took center stage at the Brockville Ontario Speedway Friday night and despite cool temperatures for night number one the racing made up for it as drivers up on the wheel, on a fast race track.

The DIRTcar Sportsman Series was set to go for 50 laps and Kevin Root and Kyle Inman were looking to settle a series title. Brad Rouse would lead the stout field early on over Kevin Root, Jackson Gill, Kyle Inman and Brianna Ladouceur. Through the opening laps it was a spirited battle between both Rouse and Root as they traded the lead several times in the opening 15 laps. Root would hold the lead on lap 19 and the top two would battle side by side. On lap 34 the yellow would fly for Thomas Cook as he experienced problems in turns 1 and 2. On the restart it was still Root and Rouse continuing their great battle as behind them Jackson Gill Matt Janczuk and Brianna Ladouceur along with Johnathon Ferguson continued a spirited battle for position with Ferguson making his way to the top 5 with a fast race car. Ferguson continued his march to the front as he started to pick of some quality cars getting by Ladouceur and Janczuk to move into the top three but still had to run down Root and Rouse as they continued to battle for the lead. On a lap 43 restart Johnathon Ferguson got what he wanted as he charged by both Brad Rouse and Kevin Root to take over the lead and begin to run away and hide. Over the finals laps it was no contest as Johnathon Ferguson would claim his third career DIRTcar Sportsman Series win, 5th of the year at Brockville and the Ogilvie’s Auto and Fleet Sportsman Triple Crown Championship in the process. Brad Rouse would cross in 2nd over Kevin Root who’s third place effort was more than enough to lock up his 2nd straight title with Matt Janczuk coming from the last chance showdown to finish while Brianna Ladouceur would round out the top 5.

The 30 lap DIRTcar Pro Stock Series race saw a battle for the lead between two former Street Stock Champions at Brockville. Five Time track champion Kevin Fetterly Jr. and Two time champion Tyler Bushey would lead the way and have a great battle in the opening laps with Stephane Lebrun, Bruno Richard and points leader CD Beauchamp completing the top 5. Fetterly and Bushey were the dominant drivers but a mistake in turn two on lap 14 saw Fetterly slip off the top side of turn two allowing Tyler Bushey to grab the lead and the yellow flag flew. On the restart Tyler Bushey was able to fend off challenges from Stephane Lebrun with Eric Jean Louis, Jay Corbin and Marc Lalonde rounding out the top 5. Bushey has only made a handful of starts in a Pro Stock but looked like a seasoned veteran as he pulled away to a half straight away lead as Stephane Lebrun tried his best to hold back Jay Corbin as they battled for the number two spot with Lalonde and Eric Jean Louis completing the top 5. After several wins in Street Stock, Tyler Bushey would dominate the final laps to score what he said in victory lane as the biggest win of his career with his first DIRTcar Pro stock Series win in just his 2nd ever start on the tour. Stephane Lebrun would cross in 2nd with Jay Corbin, Marc Lalonde and Eric Jean Louis completing the top 5. CD Beauchamp’s 6th place run was good enough to secure his first DIRTcar Pro Stock Series championship.

The 30 lap Mini Stock Invitational saw a great battle in the opening laps and Dustin Bode led early on over Danic Sylvestre, Alexis Charbonneau, Yanik Potvin and James Clarke giving chase. Sylvestre had a great car in the opening laps and was looking like the clear favorite but mechanical issues would side line him and end his great drive. On the restart Alexis Charbonneau would take the lead with James Clarke, Jamie Larocque, Jared Galway and Marc Dagenais making up the top 5. Charbonneau had a fast car as the top 5 battled hard in the closing laps. On lap 28 a scary moment occurred in turn 4 as opening night winner Jared Galway would take a violent flip in turn 4 while running in the top 5. The race was red flagged and deemed official giving Alexis Charbonneau his first Brockville win and first at the Fall Nationals. James Clarke, Jamie Larocque, Marc Dagenais and Adam Feiler would complete the top 5. Galway was alert and talking to medical officials following the accident. He would be taken to local hospital for further evaluation. 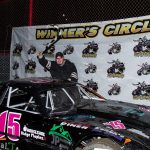 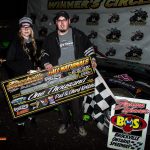 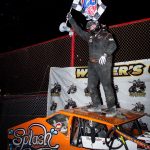 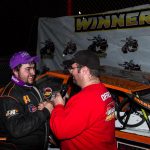 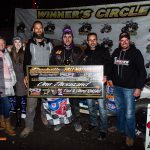 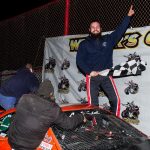 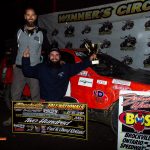