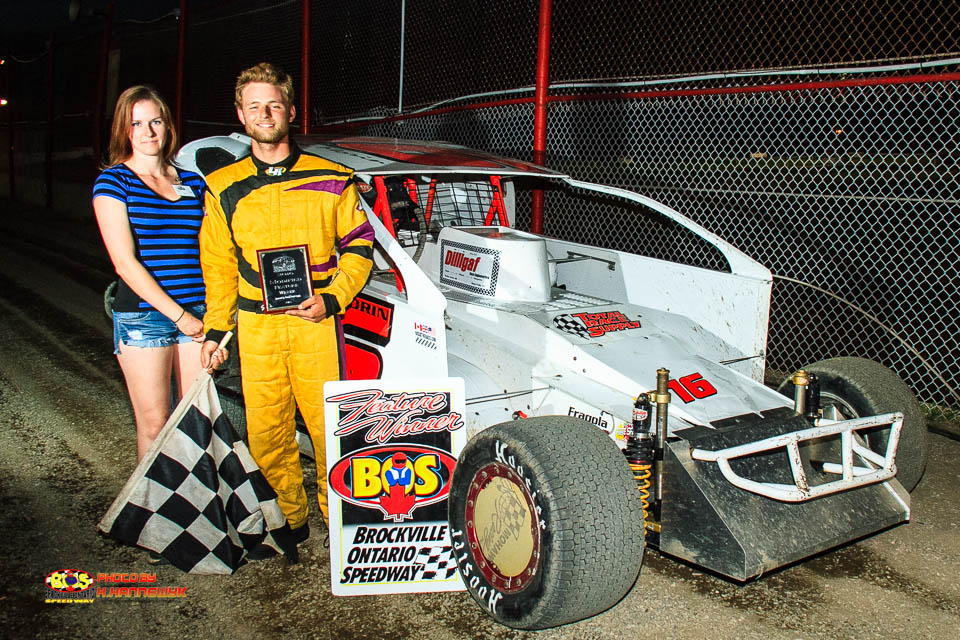 Ontario Rental and Supply was on hand this past Saturday night and witnessed a great night of racing at “The BOS” as 6 classes were ready for action on another warm evening.

The 358 Modifieds were ready for their 30 laps contest as Ryan Poole and Gage Morin led the field to the green flag but problems with Poole’s machine coming to green forced him pit side and the field was lined up once again for another start. When the green officially flew defending Ogilvie’s Auto and Fleet 358 Modified Series champion Gage Morin set the pace in the early going over Joe Banks, Chris Herbison, Kyle Dingwall and Madison Mulder. Morin had one of the best cars on the race track and began to pull away from the field but behind him Herbison, who reunited with his former championship Sportsman team over the winter months, was on the charge using the bottom of the speedway and closing in on Morin for the race lead and possibly his 4th career 358 Modified win. On lap 5 Morin continued to lead the way but it was a slim margin as Herbison continued to chip away on the bottom of the speedway with Dingwall, Tim O’Brien and Joe Banks filling out the top 5. A quick yellow flew on lap9 giving Herbison a chance at the race lead. When the green flew Morin continued his great run but coming into turn 2 he slipped to the high side which allowed Chris Herbison to draw along side of him as they raced hard into turn 3. What ensued was a fantastic battle for the lead over the remaining laps as Morin continued to hold a slight lead but Herbsion was still trying to make the bottom lane worked. At the halfway point the lead battle was still going strong with Morin and Herbison but behind them Danny O’Brien and Stephane Lafrance were on the move and looking to crack the top 5. Lafrance got to 4th getting by Tim O’Brien and tried to run down the top3 but had a lot of ground to make up. Danny O’Brien however had to come from 15th starting spot and eventually made his way to 5th with 10 to go. At the front however Morin changed his line and went to the bottom and it proved to be the difference as he pulled away from Herbison over the final 7 laps to score his first win of the season after a few weeks of struggles. Herbison took his team to their best 358 Modified finish of 2nd, Kyle Dingwall came home 3rd while Danny O’Brien slipped by Stephane Lafrance for 4th while Lafrance completed the top 5.

In the 25 lap Sportsman feature Josh Kirkland and Tom Roy paced the field to the green flag and charged into turn 1 side by side for the race lead. 3rd place starter Shane Stearns made the most of his starting spot as he charged by the top 2 to lead the way with Johnathon Ferguson, Connor Dawdy, Tom Roy and Tabatha Murphy completing the top 5. Stearns who hasn’t won since he claimed a Rookie Sportsman feature back on August the 2nd of 2014, was looking to get his first win in the regular class as he pulled away by nearly a straightaway by lap 4. On the same lap the caution flew for Josh Kirkland who slowed with problems in turn 1. On the restart Stearns continued to show the way but 9th place starter was on the move and looking for back to back victories. Evoy made his way to the 3rd spot but lap 10 and charged to 2nd 1 lap later getting by Ferguson and staged a war with Stearns for the top spot. Stearns ran the low lane but coming off turn 4 on lap 14 Evoy found a groove that was even lower and slipped by heading into turn 1 and began to pull away. With the top 3 battling hard Ryan Scott had made his way from 11th to 4th with Jason Shipclark rounding out the top 5. As the laps wound down Evoy continued to get faster and without a caution in the remaining laps nobody had a chance to catch the defending track champion as Dylan Evoy rolled to his 2nd straight win over Ryan Scott, Shane Stearns, Aaron Pugh who came from 13th starting spot to charge to 4th with Johnathon Ferguson rounding out the top 5.

The Rookie Sportsman 15 lap feature saw karting graduate Jacob Clancy charge to the lead from his 4th starting spot and put on a clinic through the entire race with Anthony Rassmussen, Derek Cryderman, Jarrett Herbison and Jeremy Coulter giving chase. On lap 2 Cryderman’s good run came to an end as his front end gave away in turn 2. On the restart Clancy charged off with the top spot while Rassmussen, who was fresh off his 2nd straight Novice Sportsman win at Mohawk on Friday night, was trying to reel in the leader with Jarrett Herbison completing the top 3. By the halfway point Clancy had a huge lead on the field, a lead he would hold the rest of the way to score his first ever Rookie Sportsman victory over Rassmussen, Herbison, Jeremy Coulter and Dan Christiensen.

The Street Stock event was one for the ages as Nick Gauvreau took over the top spot leading the opening 4 laps with Steve Toomey, Alex Gagnon, Tyler Bushey and Kody Kelly completing the top 5 early on. Gauvreau, off the big Street Stock Invitational win at Cornwall last Sunday, had a great car and look to be headed for another win. However on lap 5 Gauvreau spun in turn 2 and the yellow flag flew. This left Steve Toomey out front with Gagnon, Bushey, Travis Andrews and Kelly rounding out the top 5. Over the next 10 laps these 5 drivers put on a great side by side display of driving talent. Toomey held a slight lead but Gagnon was not about to go away quietly. Meanwhile sneaking up on the top side of the speedway was Andrews who put on a late charge near the finish. Andrews took 3rd from Alex Gagnon with 3 laps left and then drew alongside of Bushey for 2nd as the field came to the white flag. Toomey held a car length advantage as Andrews and Bushey continued their battle on the final lap. In the end Steve Toomey finally got the monkey off his back grabbing his first career Street Stock win. Andrews edged out Bushey for 2nd while Alex Gagnon and Dave Wilgosh rounded out the top 5.

In the Mini Stocks Colin Tracey was one of the fastest cars on the track on this night as he took the lead from the outside pole and led the opening 7 laps with Chris Bakker, opening day winner Teddy Baird, Dylan Kirkland and Bob Ray giving chase. Tracey had a great car but former Rookie Sportsman champion Chris Bakker was on his way and looking for the lead. On lap 9 Bakker took over the lead shuffling Tracey to 2nd which also allowed Baird and Ray to challenge for the 2nd spot. With Bakker pulling away Bair Tracey and Ray were locked in a 3 wide battle heading into turn 1. Tracey got slightly out of shape and slipped off turn 2 ending his great run. On the final restart Bakker was able to pull away and lead the final 4 laps scoring his first win at Brockville since his Rookie Sportsman feature win in August of 2013. Teddy Baird would cross in 2nd with Bob Ray, smoking car and all coming home 3rd while Dylan Kirklaqnd and Dave Watchorn rounded out the top 5.

The night was capped off by a 10 lap Outlaw Vintage Modified feature. Josh Powers took the lead from the outside pole and never looked back taking home a dominant win in the caution free event with Pete Stapper crossing 2nd and Ryan Comeau finishing up 3rd.

Next week NAPA Auto Parts will be on hand for a full card of racing in all divisions plus the return of the Outlaw Vintage Modifieds. The action begins at 7pm.