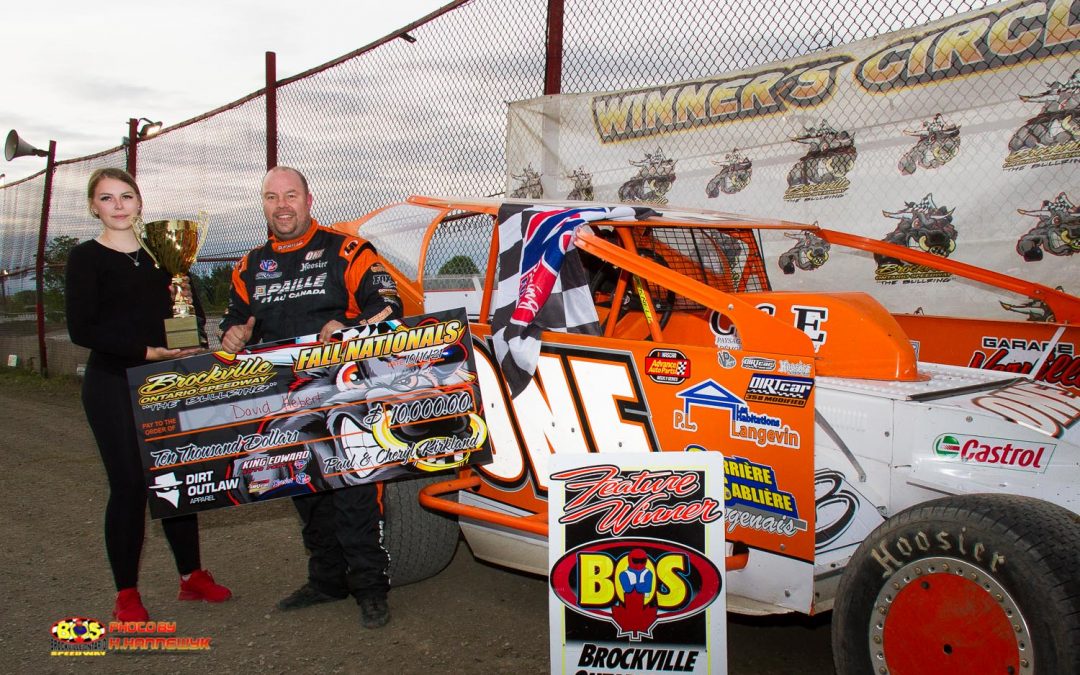 It may have taken until May of 2022 to finish off the 13th edition of the Dirt Outlaw Apparel/King Edward Auto Parts Fall Nationals at the Brockville Ontario Speedway, but it was well worth the wait. Repeat champions and history makers headlined the day, making this event one to remember.

The green was out for the start of the $10,000 to win DIRTcar 358 Modified feature and pole sitter David Hebert led the way with Ryan Arbuthnot closing quickly. On lap 6 the two time Brockville track champion made short work of Hebert as he took the lead and started to pull away. Despite a couple of yellows for minor spins, Ryan Arbuthnot was not phased by the challenges Hebert gave him, as he would pull away easily, as the race closed in on lap 30. On lap 31 Hebert start to reel in the race leader as 3rd place Gary Lindberg was also making a charge to the front of the field. The race would be slowed on lap 42. 2016 Fall Nationals Sportsman champion Louie Jackson Jr., hit the turn 4 wall hard. Jackson was fine but the car suffered heavy damage. When the green flew Hebert and Arbuthnot remained in control but David Hebert was right there to challenge. On lap 59 David Hebert would make his move for the lead and put on a dominant performance, with Gary Lindberg, Kyle Dingwall and Corey Wheeler in the top 5. The track began to get slick as drivers had to take care of their cars, which was good for Hebert as he continued his great run. On lap 65 Gary Lindberg broke the front end on his car, which ended his day. David Hebert would get a great launch on the next restart over Arbuthnot, Dingwall, Wheeler and Danny O’Brien, who charged from 18th to 5th. On this day, David Hebert was smooth and steady as he would go unchallenged to claim his 2nd DIRTcar 358 Modified Fall Nationals championship and $10,000. Ryan Arbuthnot, Kyle Dingwall, Corey Wheeler and Danny O’Brien completed the top 5.

Brad Rouse picked up the win for the Friday night portion of the Fall Nationals in October, he was back to look for the sweep. Cedric Gauvreau paced the field early in the 50 lap event, but Rouse would take command of the field and start to author a dominant performance, that many have not seen in recent memory. Rouse would build up over a straight away lead by lap 24 but behind him, Gauvreau, Jessica Power Fire Swamp and Gilles Godard were putting on a great show for the fans as Power did all she could to take the number two spot away. By lap 30 Rouse had lapped to nearly the top 10 and showed no signs of letting up on a track that was slick and challenging. On lap 35 the field got a breather as the yellow flew, which brought Fire Swamp to 2nd and looking to claim his first ever win. When the green flew Rouse pulled away once again but Jessica Power made her way to 2nd and the battle was on as Gauvreau and Godard were starting to close in one more time. With 10 to go it looked like Rouse could not be stopped. A turn of events on lap 42 when Rouse slowed with a vibration, as Jessica Power made a big move to grab the lead and the yellow flew. On the final restart Jessica Power hit it perfectly as she pulled away to a comfortable advantage with Swamp, Godard, Gauvreau and Dylan Kirkland giving chase. On this day Jessica Power would go on and become the first female competitor to win a Fall Nationals title in the event’s 13 year history. Fire Swamp settled for 2nd with Gilles Godard Cedric Gauvreau and Dylan Kirkland completing the top 5.

Kraig Handley was the driver to beat early on in the 30 lap Street Stock event over Brock Gregory and defending race winner Adam Turner. The yellow would fly quickly for a three car tangle in turn 4, however all drivers were able to continue. When the green returned Kraig Handley was out front and began to pull away from a quality field leaving Gregory to battle with Adam Turner for 2nd along with Dave McDonald and Todd Raabe. Handley was clearly the fastest car on the track and was destined for victory as behind him, Adam Turner would wrestle the 2nd spot away, but still had work to do to catch the leader. With 3 laps to go, Kraig Handley would have a disappointing end to his day as a big cloud of smoke came from the back of his car, giving Adam Turner the race lead. On the final restart, Adam Turn would hold off a determined Brock Gregory to score his 2nd straight Fall Nationals Street Stock win. Gregory held on for 2nd while Todd Raabe charged to 3rd over former Fall Nationals champion Doug O’Blenis and Mike Lucas.

The 25 lap 1000 Islands RV Crate Sprint Car feature was a great battle all race long as Darrell Pelletier led the way over defending track champion Matt Billings and Ryan Poole. Pelletier had a quick car as he drove away in the opening laps to over a straight away lead. At half way, Pelletier continued to lead but Billings was closing quickly. On lap 16 Ryan Poole would slide off the top of the track ending his shot for a win. When the green flew Billings remained up front but Lee Ladouceur was on the move taking 2nd away, but had some work to catch the leader. As the laps wound down Lee Ladouceur would get close but it was not meant to be as Matt Billings would march on to his first Fall Nationals championship in Crate Sprints. Ladouceur would finish 2nd over Pelletier Ryan Poole and Brett Stratford.

The 25 lap Vintage feature was full of action from the start of the event. Former Modified star Jason Riddell jumped into the lead early on over Steve Billings and Randy Gaudet. Billings was on a mission get his Dave Heaslip tribute car to victory lane, as he took the first step in grabbing the lead from Riddell on lap 7. From there Billings was making it look easy but Gaudet and Josh Powers were having a great battle for 2nd. On lap 15 following a quick caution, Ian Gordon came off turn 4 and got out of shape. Several cars piled in causing Gordon to flip over on his roof. Despite the hard hit, Gordon was able to walk away uninjured. When the green came back out Steve Billings continued to lead but had a problem as the rear end broke on his car. Billings kept going as he was determined to get to victory lane. The determination paid off as Billings would claim his first Fall Nationals Vintage win to go along with his 2009 Street Stock win. Randy Gaudet, Brandon Gregory, Josh Powers and Gavin Riddell would round out the top 5.

Regular racing action returns Saturday night with a full show for the DIRTcar 358 Modified and DIRTcar Sportsman. The 1000 Islands RV Crate Sprints and Novice Sportsman are back while the Street Stock make their 2nd appearance of the season. 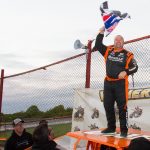 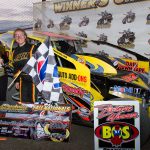 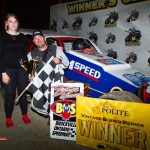 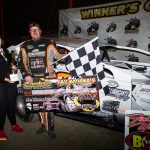 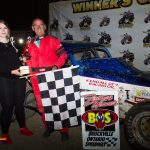 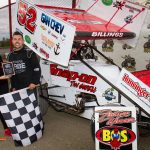 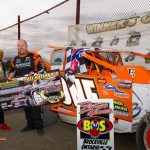