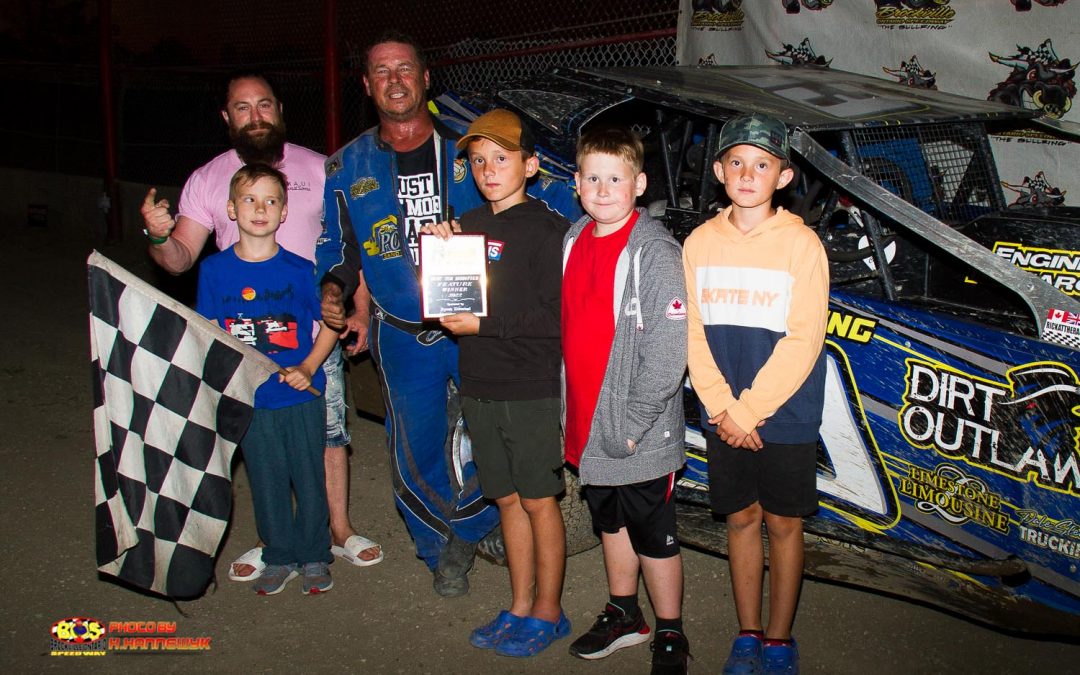 The Brockville Ontario Speedway has seen some exciting racing action over the course of the 2022 racing season and this past Saturday was event better. Thrilling finishes had the crowd on its feet all night long.

It had been since 2019 since Chris Herbison last won a DIRTcar 358 Modified feature until he took care of that a week ago. On this night he would be a force once again. Kalen Draper was the early leader in the 30 lap event, over Terry McClelland, Jeff Sykes, Joe Banks and Jarrett Herbison. Banks would take over the lead on lap 4 which sparked a back-and-forth battle for the lead between Draper and Banks, while behind them Chris Herbison, Kyle Dingwall and Johnathon Ferguson were on the charge to the front. At the halfway point Ferguson moved into contention as he took over second and brought Herbison to third. On lap 16 Chris Herbison made a big move going three wide to take over the top spot, with Kyle Dingwall and Chris Raabe also moving into the top 5. Herbsion started to check out and looked to be on his way to another win as Dingwall and Raabe both settled into second and third. The caution flew for a final time on lap 25 giving Dingwall and Raabe one final shot. When the green flew Herbison took the inside lane away from both drivers after running the top lane for the majority of the race. Despite a last ditch effort by Raabe and Dingwall, Chris Herbison would drive on to his second win in a row and 8th of his Brockville Speedway career. Dingwall and Raabe round out the podium while Johnathon Ferguson came home fourth and Ryan Arbuthnot rebounded from early race issues to finish 5th.

Greg Brinklow has had some solid outings in 2022 and would grab the lead from Michael Dillon at the start of the 25 lap DIRTcar Sportsman feature event. Brinklow was fast in the opening laps and was on a mission to become the third first time winner in as many weeks. However on lap 6 the motor expired and the yellow flew. Dylan Kirkland would take control of the race and beginning to put in a dominant performance as he held a big lead over Michael Dillon but defending track champion Bobby Herrington was on the move. Herrington came from 10th on the grid to charge to second but still had over a straight away to make up on Kirkland. With 10 to go the lead gap began to shrink as Herrington adjusted his line as the handling went away on Kirkland’s car. On lap 19 Herrington made his move in turn 4 to take over the top spot for good. It had been since May 21st since the defending champ went to victory lane and he would end that drought as Bobby Herrington scored win number two of the season. Dylan Kirkland, Domonick Merkley, Xavier Andrews and Shane Stearns completed the top 5.

The 15 lap Mini Stock feature saw Jamie Larocque claim the top spot over Matt Boal and Cornwall invader Skylar Ladouceur. Ladouceur had one of the fastest cars on the track as he battled with Larocque in the early laps. On lap 5 Ladouceur took control of the race, while Larocque and Matt Boal continued to battle in the top three. As the laps wound down Skylar Ladouceur got faster and without help from a caution flag, Larocque and the rest of the field were going to have a tough time catching the leader. On this night, Skylar Ladouceur proved to be too much as he collected his first ever Brockville Mini Stock checkered flag. Jamie Larocque had a solid points day finishing 2nd over Curtis Lindsay, Matt and Dakota Boal.

Mathieu Bardier was tough to catch one week ago in the Thousand Islands RV Crate Sprints as he dominated the event. On this night it was almost the same as Bardier took the lead in the 15 lap contest. Lee Ladouceur and Ryan Poole tried at will to run down the race leader, but with the race going caution free Mathieu Bardier would go unchallenged to score his 2nd win in a row. Lee Ladouceur and Ryan Poole completed the podium.

Mario Dupuis has been close to winning in Novice Sportsman in his career and he took the lead early in the 12 lap event and had the fastest car on the track. Dupuis held the lead in the early laps as Nathan Lambert and Holly Denard gave chase. The race was halted by several cautions that included top point runners like Gavin and Sandy MacFarlane. Shawn Hodge also had problems late in the going forcing him pitside. With 5 to go Dupuis was in control over Lambert, while Holly Denard battled Stephane Fournier for 3rd. On lap 9 Denard and Fournier tangled resulting in Denard, spinning out in turn 3. On the final restart Mario Dupuis finally put it all together to score his first career Novice Sportsman win. Nathan Lambert crossed in 2nd with Paul Donnelly 3rd.

Next week a regular card of racing is set to go at 7pm with the return of the Vintage Modifieds and Street Stocks as they will join the DIRTcar 358 Modifieds, DIRTcar Sportsman, Novice Sportsman and 1000 Islands RV Crate Sprints. Racing begins at 7pm. 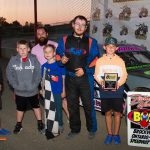 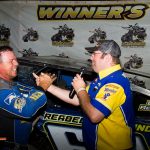 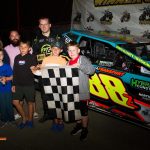 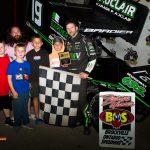 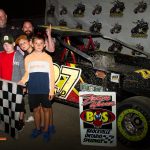 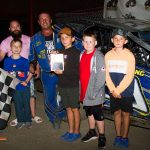