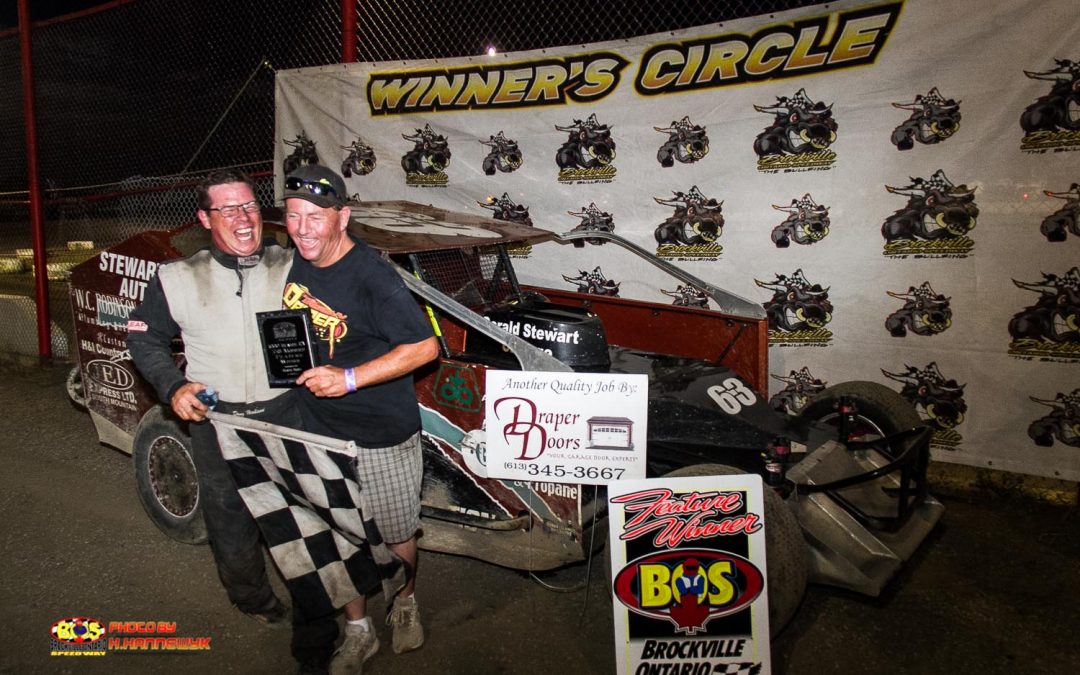 BROCKVILLE, ONT – Another warm Saturday night at the Brockville Ontario Speedway was in store for the fans, teams and drivers this past Saturday night. Draper Doors was on hand as the top drivers in all five classes were set to roll.

Aaron Pugh would lead early on at the start of the 1000 Islands RV 358 Modifieds over Tim O’Brien, Andy Lloyd, Joe Banks and Chris Herbison. Pugh held a comfortable lead until lap 6 when the yellow flew for Lee Ladouceur as he slid off the track in turn four. On the restart an accordion affect happened on the front stretch as drivers bunched up down the front straight away with a massive pile up heading into turn one, and the red flag flew. As bad as the crash looked, all 8 drivers involved were able to pull away with only minor damage and able to rejoin at the back of the field. On the restart Tim O’Brien would make his way to the lead with Aaron Pugh now 2nd and Chris Herbison completing the top 3. On lap 10 Jeremy LaSalle would come to a stop in turn four bringing out the yellow once again. When the green flew Chris Herbison would use the bottom side to his advantage and take over the lead leaving O’Brien to battle with Aaron Pugh for 2nd. Once in front Herbison began to stretch out the lead to a half straight away but O’Brien, Pugh and Kyle Dingwall were having their own battle for the second spot, which O’Brien would eventually hang on to. As the laps wound down lapped cars started to become a factor and Tim O’Brien knew this was his only shot at the leader. At the white flag Herbison was able to navigate traffic perfectly and despite late charge by Tim O’Brien, the Brockville native was able to hang on for his first win of 2019. Tim O’Brien claimed the runner up spot over Kyle Dingwall, Ryan Arbuthnot charged from the back after being caught up in the lap 6 pile up to finish fourth with Aaron Pugh completing the top five.

The 25 laps Sportsman feature saw a total of three different leaders in the first five laps. Dale Gifford lead the opening lap but Dave Wilgosh was on the charge and would take over the lead quickly on lap number two. The caution flew on lap 4 as Josh Kirkland lost the handle on his car in turns one and two. He would be able to rejoin at the tail of the field. When the green flew, Dan Ferguson would take the top spot away bringing Jon Mills to second over Wilgosh, Xavier Andrews and Shane Stearns. As the bottom lane proved to be the fast was Dan Ferguson would drive away from the field and set a comfortable pace as Mills and Andrews continued their battle for a top three spot. By the halfway point it appeared Dan Ferguson would cruise to an easy win but on lap 17 that would all change as Johnathon Ferguson would slide off the track in turn number four. When the green flew again it was Ferguson in control with Jon Mills right there to challenge but the driver on the charge was Ryan Scott. After spirited battle for fourth with Shane Stearns he was able to challenge Xavier Andrews for third and appeared to be the driver who would challenge for the win. Over the final laps Dan Ferguson would hit his marks and after several years of traveling to different tracks, he would finally land in victory lane for his first ever Sportsman feature win. Jon Mills would take home 2nd with Xavier Andrews third, Ryan Scott’s late race charge resulted in a fourth-place effort while Shane Stearns would complete the top 5.

The Draper Doors Rookie Sportsman feature was a wild finish as Tyler Stewart led the field in the early laps over Domonick Merkley and Evans Reynolds. As Stewart and Reynolds led the field in the opening laps, they were the dominant drivers until lap 8 when Justin Saunders spun his car in turn 2 bringing out the yellow. On the restart Stewart and Reynolds continued their dominance of the event but that would be short lived once again as the yellow flew for a tangle in turns one and two with Stephane Fournier and Mario Dupuis. When the green flew it was a battle between two of the sports future stars as Reynolds and Stewart traded lanes, positions and the occasional car color. On the final lap both drivers made slight contact in turn 1 and Reynolds would take over the lead. Heading into turn three Stewart would charge hard into turn three and the two drivers again made contact. At the line after a wild final lap Tyler Stewart would emerge victorious over Evan Reynolds and Dylan Kirkland.

The story in the Street Stock ranks has been about a dominant driver who had the worst luck in recent memory. Todd Raabe, who is a threat to win the title every season, has had problems finishing races all year and on this night, he would battle for the lead with early pace setter Kyle Massey and Brent Merkley. On lap 8 Raabe would take the lead away and appear to be on his way to a sure win. However, on the same lap three-time winner Michael Dillon would slow in turns one and two, and his night would come to an end. On the restart Raabe held the lead but a new challenger in the form of Bruno Richard would close in on Raabe as he looked for his 2nd win of the year. On lap 13 Kyle Massey saw a sure top five finish go away as he slowed in turns one and tow, done for the event. On the final lap Todd Raabe would drive the perfect lap and after several weeks of heart break, would score his first Street Stock win nearly a year to the day of his most recent feature win. Bruno Richard would claim 2nd over Steve Billings, Keith Riddell and Shawn Hodge.

The Outlaw Vintage 12 lap feature saw a battle between two young stars as Matt Barbour would challenge race leader and defending track champion Kenny Polite for the lead in the opening laps over Pete Stapper, Jeff Bode and Bill Plooy. As the top two pulled away the bottom was the place to be and Kenny Polite knew he had to protect the bottom. Over the final laps Matt Barbour made several attempts to get by, but it would not happen. Kenny Polite would charge on to grab his 2nd win in a row and 3rd of the season in the Outlaw Vintage division. Matt Barbour would finish a close 2nd in his season debut, with Pete Stapper, Bill Plooy and Jeff Bode completing the top 5.

Next week the rescheduled date for the Ogilvie’s Auto and Fleet Triple Crown Series for the 1000 Islands RV 358 Modified and Sportsman will take to the speedway. The Draper Doors Rookie Sportsman, Street Stock and Mini Stocks will be on the card. Racing action begins at 7pm. For more information on points, results and news happening at the speedway, check out our website at brockvillespeedway.com. Don’t forget to follow us on our Facebook, Twitter and our new Instagram page for more of what’s happening at “The BOS”. 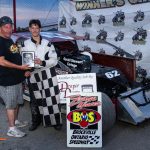 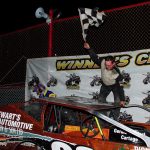 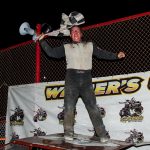 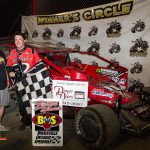 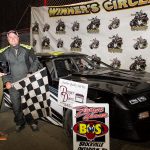 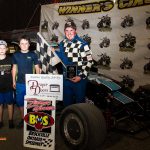